In News and Film, the Anti-Israel Bias Pervades 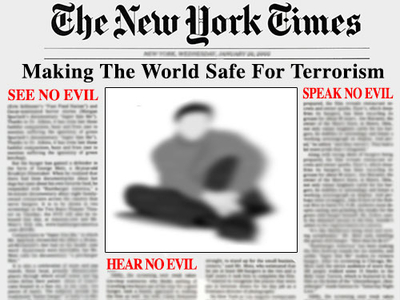 The world media has launched so many anti-Israel propaganda "rockets" that it feels like they far outnumber the real ones that Hamas has launched against civilian Israel.

From May 10-19, the New York Times alone printed enough words (76,586) about Hamas's attack on Israel to constitute a novel. Even when it reports a true fact, which it does, its impact is dulled or even lost by the overriding narrative context in which Israel is at fault and Hamas is either innocent or heroically resisting "settler" oppression and Nazi-like persecution.

This word count does not include the many photographs of weeping Palestinian mothers, wounded and bloody Palestinian fathers, bombed Gazan buildings, allegedly dead Palestinian children, etc. Each print edition has at least six to eight such photographs. Perhaps there's one small photo in each issue which shows us minor damage to an Israeli house and an unclear example of Israelis in a stairwell – but the Israeli photos always appear second or last and are always smaller.

From a psychological point of view, first impressions and size are what count.

The headlines in the print editions are also misleading. Take Sunday's headline: "4 Weeks on Path to War: From Raid on a Mosque to Middle East Carnage." However, Israeli forces or civilians did not torch any mosque. In fact, Arab mobs created a riot on the Temple Mount, burned a synagogue down to the ground in Lod, and lynch-murdered an Israeli man, also in Lod.

Tuesday's headline was: "MidEast Violence Rages on as Biden Backs a Cease-Fire. He Avoids Placing Blame—Israel Vows to Keep Hitting Hamas Targets." As usual, the paper of record trumpets "the deaths of dozens of Palestinian children" in its opening paragraph without always noting how many of those children were probably murdered by Hamas's own rockets which fell short – or because Hamas placed their weapons and military intelligence headquarters in schools, hospitals, and mosques – creating human shields for propaganda purposes. This should be routinely noted in daily coverage.

You have to get to the end of the sixth paragraph before you read that Hamas "has killed nine civilians in Israel, including two children, and at least one soldier." Oddly, they rarely report the number of Israeli wounded and traumatized by constant rocket fire.

As usual, there are multiple pieces on this one subject in this same issue.

Instead of describing and naming the treacherous insurrection launched by some Arab citizens, the Times describes it as "civil unrest." In my humble opinion, Israel must find every single member of each Arab mob, jail, prosecute, and sentence them.

Israel is surrounded by the most insidious "Big Lies." In my view, this constitutes incitement to knifing, car-ramming, lynching, full-on pogroms, ethnic cleansing, and genocide, atrocities in which Jews are the victims, not the aggressors.

How can such blood libels be believed? In addition to our 3,000-year history of anti-Jewish propaganda, let me suggest that the modern, world-wide film industry now bears a singular responsibility for grooming people to believe only the worst about Israel and only the best about a Palestinian terrorist group that oppresses its own people and is dedicated to Israel's destruction.

Films can show us lies – which we believe because we saw them "with our own eyes." The purposeful "murder" of Muhammad Al-Dura at the Netzavim junction, the fake Israeli massacre in Jenin, the Israeli defensive action against the armed Turkish flotilla, the Mavi Marmara, etc.

What we never get to see is why such single file tunneling and ID checking came into being, namely the intense 2001-2002 terrorist bombing campaigns by Palestinians from the disputed territories – not the occupied territories – in the West Bank, which claimed more than 1,000 Israeli civilian lives and wounded far more. Hence, the security wall and the checkpoints were added to protect Israeli civilians. Like the Iron Dome, they work.

Nabulsi's film is only the latest in a long line of similar propaganda films.

For example, in 2005, Paradise Now won many awards and sold to 45 countries. Backed by Dutch, French, and German investors, the film "humanized" Palestinian suicide killers. Again, the hero is a very handsome and soulful man, an Arab Marcello Mastroianni, played by Kaif Nashef. We are rooting for him, Said, and his comrade, Khaled, and not for the doomed Israelis. To bring this about, the film lies about everything. Well, it's fiction, and isn't fiction entitled to all the lies it can tell? Here's what I wrote about this way back in 2005:

"Doctored film footage of fake Israeli massacres and fake Jewish and Israeli killings of Palestinian innocents have already inflamed most of the Arab and Muslim world; the European and to some extent the American media has been inundated with precisely this point of view. Paradise Now is the first feature film on the subject by a Palestinian. Because this is a good film, it will have enormous ongoing influence over how an already heavily indoctrinated world audience views the phenomenon of Palestinian suicide bombings.

Indeed, perhaps the biggest lie in this film is something the film omits almost entirely: we do not get a clear sense of how filthy and continuous the hatred of Jews and Israel really is among Palestinians, how brainwashed the impoverished Palestinian population really is. And this hatred continues in the film: a taxi driver, for instance, accuses the Israelis of polluting the drinking water with anti-spermicides – not so different from what Mrs. Arafat said when she accused the Israelis of causing cancer and fertility problems among Palestinian women.

Also omitted are the bloody Israeli body-parts, the screams, the terror, the pain, the life-long disabilities, the collective Israeli agony. In fact, we do not get to see Said blow up his bus of Israeli soldiers. We see him in a series of close-ups—and then the screen goes white. Slowly, we understand that he has detonated his bomb. Slowly, the screen credits come up in Arabic."

Since then, film after film has presented both Israel and America as the bad guys, and Arabs, immigrants, and especially terrorists, as justified, sympathetic, and heroic. Here I am thinking about George Clooney's Syriana; Brad Pitts' Babel and A Mighty Heart, a film purportedly about the beheading of Daniel Pearl, but which was politically correct enough to be hosted by CAIR (the Council on Islamic American Relations) at its premiere in Los Angeles.

Let me mention just one more film which drives the Palestinian narrative. In Amreeka, which premiered at the Sundance film festival in 2009, the Israelis are again depicted as all bad. They are shown only as soldiers, always manning checkpoints (a la The Present), where they harass, mistreat, and terrorize innocent, sympathetic Palestinian civilians. There are absolutely no good Israelis – and all the Palestinians, including the suicide killers, are charming and sympathetic. When a Palestinian mother and children flee to America, with a few exceptions, they find the same hatefulness and Islamophobia here.

These films, and many others: The Visitor; Unwelcome: The Muslim Next Door; The Reluctant Fundamentalist, Waltz with Bashir; have been widely viewed and written about. It is not too hard for readers to believe this exact same narrative in print. They've already seen it again and again.

I highly recommend Pierre Rehov's films as a corrective. See all his films, but especially, view War Crimes in Gaza.