Yet Again, the Media Blames Israel for a Conflict Hamas Started 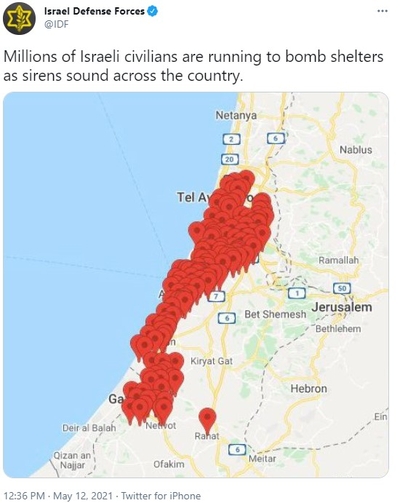 Islamist terrorist groups, Hamas and Palestinian Islamic Jihad have launched more than 1,200 rockets (and counting) toward Israel since Monday, and the United Nations (!), is keeping close watch, issuing warnings, and sharing their fears that a full-scale "war" is about to break out.

I only vaguely remember the United Nations weighing in worriedly all those years when rockets, incendiary kites, and burning tires exploded on southern Israel, causing panic and life-long trauma in both children and adults. Not war enough? Or earlier, when Israeli civilians were being blown up in buses, hotels, nightclubs, and in their homes—which is what led Israel to build its security fence, aka "the apartheid wall," to keep the terrorists out. It worked.

When Israelis were being knifed in their beds, car-rammed in the streets, kidnapped by Hamas and held for ransom while being tortured, where was the International Criminal Court (ICC)? Now, the ICC is monitoring the situation for "possible war crimes."

Tel Aviv has been bombed! Arab Palestinian citizens of Israel, in Lod, have turned on their neighbors. The nearby Ben-Gurion Airport had to be shut down. This may escalate into a full-fledged war.

A synagogue set on fire reminds every Jew of all the European and Arab synagogues set on fire during pogroms, during Christian and Muslim holy days—and for good measure, on Jewish holy days, too. We see "Kristallnacht" when our synagogues are torched and we know what comes next: Jews being burned, going up in unholy smoke. And, the entire matter is far more complex than most mainstream media coverage bother to convey.

Shoshana Bryen just published something in Newsweek that manages to capture the diabolical complexity upon us. "Things tend to run together in the Middle East," she wrote. "Right now, Sheikh Jarrah, Palestinian elections, the Hamas-Fatah civil war, the Abraham Accords, U.S. recognition of Jerusalem as the capital of Israel, Iran sanctions, Jerusalem Day, the Meron tragedy, Israel's electoral issues and American money and diplomacy are all tangled."

For example, according to Kingsley and Kershner in today's New York Times: Hamas "framed its rockets as a direct response to a pair of Israeli police raids on the Aqsa Mosque compound, a religious site in East Jerusalem, sacred to both Muslims and Jews."

You would be outraged by how "unevenly the Palestinian militants and Israeli military are matched, the former with rockets, the latter with fighter jets and a sophisticated antimissile defense system, the Iron Dome, partly financed by the United States."

You would also see front-page photos of devastation in Gaza first, they always appear first, and that of a burned out bus outside of Tel Aviv second. You would also read about innocent Palestinian civilians in Gaza who were killed, and who are mourning their dead, long before you'd read about an Israeli woman who – wait for it – is a former soldier, born in Ukraine, and who actually survived the rocket attacks.

At a subconscious level, you might be wondering: How can I feel as much sympathy for someone who was once a "soldier" and born in Ukraine? She cannot be indigenous to the area, can she, not as much as "Osama Soboh" in Gaza clearly is – the man who just lost his mother and brother and whom you've seen quoted first.

The paper of record reports blood libels without fact checking. Today, Kingsley and Kershner quote a Bashir Al-Masri, who accuses Israel of "target[ing] buildings with children, they target ambulances, they target schools."

This is simply not true. What is true is that Palestinian leaders use their children and women as human shields; stockpile their weapons in hospitals and schools. The ICC's own statutes say that using "the presence of a civilian or other protected person to render certain points, areas or military forces immune from military operations" constitutes a war crime in international armed conflicts.

Palestinian leaders also fake injuries and deaths on camera and report false casualty numbers to foreign journalists all too willing to believe anything that puts Israel in a bad light.

In today's New York Times' piece by Kingsley and Kershner, there's only one – that's right only one – description of Israelis as "right wing." They described Israelis this way 15 times on May 7, seven times on May 11 – and they're now down to one time only.

Might we consider this as progress of some kind?

You would not read about this in the New York Times. So far, photos and a description has only appeared in London's The Daily Mail.

I have long been on record calling for an anti-propaganda equivalent to Israel's Iron Dome to repel blood libels and anti-Jewish and anti-Israel disinformation. Israel is now not only at the mercy of riots and rocket fire. It is also surrounded by a highly propagandized world that views Israel in the worst possible light.