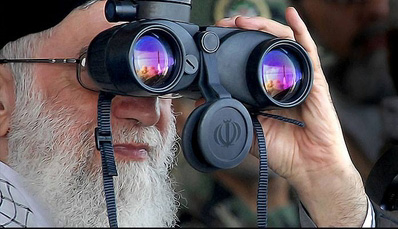 Iran's hegemony scheme for the Middle East not only includes surrounding Israel with missile bases and heavily armed proxies, but also earmarking territories further away, such as Iraq and Yemen, as future bases of attack.

Behind the scenes, and despite its severe economic distress due to U.S. sanctions, Iran is working constantly to infiltrate and consolidate its presence in lands with partial or failed sovereignty, or in the case of Syria, ruled by an ally.

Iran uses the regional situation to create new security risks throughout the Middle East, while also calling on its proxy terrorist assets to pile on the pressure on the U.S. ahead of nuclear talks.

Hizballah, Iran's flagship forward division in Lebanon, which is armed with more surface-to-surface firepower than most NATO armies, serves as the ideal model that Iran works to replicate elsewhere, and its efforts to do this in Syria have run into a determined Israeli campaign of disruption.

Yet Iranian plans for other regions like Iraq and Yemen are no less important to the Ayatollah's regime and to the Islamic Revolutionary Guards Corps, which have a long-term objective of building a Shi'ite crescent through the Middle East.

And it is not only Israel that is in the firing line; Sunni Arab states are even more exposed.

A major Saudi oil port at Ras Tamura, on the Persian Gulf coast, came under drone attack on March 7, with a missile also hitting a nearby residential area run by the Saudi Aramco oil company in Dhahran, in eastern Saudi Arabia,.

The Iranian-backed Houthi militia in Yemen claimed responsibility for the attack, saying it struck oil and military targets. The Houthis are fighting Yemen's Saudi-backed government.

Since then, Saudi sources have indicated that the attack's real origins may have come from an Iranian proxy organization in Iraq, or even from Iran directly.

The attack represents a severe threat to global energy supplies and to world economic stability, the sources warned, and it is reminiscent of the unprecedented Iranian explosive drone attack on two major Saudi oil processing installations in 2019, at Abqaiq and Khuaris, initially knocking out half of Saudi Arabia's oil production.

Meanwhile, as part of its effort to ramp up the pressure on the Biden administration ahead of talks over a new possible nuclear agreement, Iran's proxies have been firing rockets at bases with U.S. personnel in Iraq, such as the attack Sunday involving the launch of five rockets at base north of Baghdad. The latest attacks show that Iran is undeterred by the American retaliation in late February to previous rocket attacks on bases in Iraq, in the form of air strikes on Iran-backed militias in Syria.

In addition, consistent reports have emerged over the past two years of Iran moving missiles to Iraq, from where it can target Israel. And in January, the IDF reportedly stationed an Iron Dome air defense battery in the southern Israeli Red Sea city of Eilat amid threats that Houthis in Yemen could target the city with long-range cruise missiles or drones on Iranian orders.

A January report in Newsweek, which appears to be based on intelligence information, stated that Iran deployed Shahed-136 suicide drones to northern Yemen. They have a range of up to 2,200 kilometers (1,370 miles), placing Israel in range. The Houthis have repeatedly threatened to attack targets in Israel, and also pose a tangible threat to Israeli shipping in the Red Sea.

Ultimately, the attacks on Saudi Arabia out of Yemen and Iraq are a clear signal of Iran's intent. It wants to gain the ability to strike the sensitive strategic targets of Sunni states and Israel, and to do so from as many areas in the Middle East as possible.

These incidents could all be preludes to future destabilizing acts by the Islamic Republic, which is intent on smuggling more ballistic missiles, cruise missiles, drones, and other weapons to the radical forces under its command in Iraq and Yemen, as well as Syria and Lebanon.

These activities should be seen as part of a greater picture. Considerable threats exist inside Iranian territory itself. The nuclear program is chief among these. Tehran has taken alarming steps to accelerate it, such as the enrichment of uranium to 20 percent, and the production of uranium metal – both milestones on the path to nuclear breakout – should Iran decide to do so. Iran would like to one day extend a nuclear umbrella over its proxies, a development that would forever alter the Middle East, and likely set off a nuclear arms race with Sunni powers threatened by Iran.

Meanwhile, Iran's well developed domestic weapons industries produce an array of conventional and increasingly reliable ballistic and cruise missiles, which the regime makes sure to show off and sabre-rattle on a regular basis. A safe working assumption is that many of the advanced weapons being produced in Iran will be proliferated along the Quds Force smuggling networks to proxies in Iraq, Syria, Lebanon, and Yemen.

Iran's ability to introduce precision strike technology to its projectiles, and to those of its proxy forces, means that sensitive targets in countries in its sights are exposed. However, Israel's multi-layered air defense system is the most advanced in the world, and is constantly undergoing upgrades. It is this system, and the strategic durability that it provides, that allows Israel to flourish despite being threatened by some 150,000 Hizballah projectiles.

Still, Iran's proxies in the region can also complement their smuggled weapons with off-the-shelf technology, buying items such as commercial drones and fitting them with grenades or rocket-propelled grenades for just tens of thousands of dollars.

While the Saudi-led coalition remains locked in an air strike campaign against the Houthis in Yemen, and is beefing up its air defenses, the Saudis and their Gulf allies appear to be highly vulnerable to threats from Iraq and from Iran itself.

Israel, for its part, is engaged in a long-standing shadow war against Iranian weapons smuggling and the Iranian attempts to build military attack bases in the region, with a special focus on Syria, though the campaign is unlikely to be limited to Syria. In this campaign, Israel must constantly assess the risks of acting and not acting as it monitors intelligence on Iranian aggression.

This campaign includes action in multiple arenas, and is part of Israel's daily effort to defend its vital security interests without crossing the threshold of war.

Israel's campaign is designed to delay the outbreak of war by boosting deterrence, demonstrating intelligence and strike capabilities to Iran and its proxies, and harming the Iranian axis's capabilities. Yet the risk of conflict exists with every turn, since Iran, or a member of its axis, can retaliate and set off an escalation. Should a broader conflict erupt, the campaign between the wars is also designed to create better conditions for Israel to win.

Israel presumably coordinates such activities with the United States on an ongoing basis in order to avoid surprising its most important ally, which still has forces stationed in Iraq.

No less importantly, the growing Iranian threat has created a clear set of joint interests between Israel, Saudi Arabia, and other Sunni Arab states, a factor that greatly fueled the historic Abraham Accords between Israel and the UAE and Bahrain.

Israel's ability to proactively block and disrupt Iranian activities across multiple areas makes it an attractive partner to Sunni countries, as both the Jewish state and Arab states stand in one camp, facing the same strategic threat from Tehran and its many tentacles.