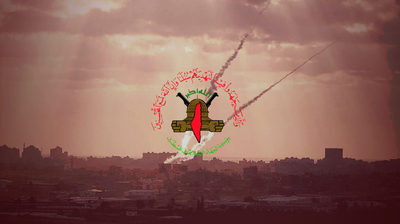 Palestinian Islamic Jihad (PIJ), an Iranian-backed terrorist faction in Gaza that has an even larger rocket arsenal than Hamas, has been working hard in recent weeks to try to spark conflict with Israel.

On Friday, as PIJ representatives met with Hamas counterparts in Cairo, pretending to hammer out a long-term arrangement with Egyptian officials to stabilize the Gaza Strip, a PIJ cell launched a sniper attack on Israel Defense Forces (IDF) personnel.

It wasn't the first recent PIJ armed attack on Israel. At the end of April, the terror group fired a rocket at a southern Israeli city, which landed in the Mediterranean Sea. PIJ had also been busy speeding up the digging of a new terror attack tunnel from Rafah, in southern Gaza, into Israel. The IDF had been monitoring the tunnel's development, and destroyed it during the recent flare-up before PIJ could send killing and kidnap squads into the country.

In March, two PIJ operatives armed with grenades and knives were caught heading for a southern Israeli village after infiltrating from Gaza.

Yet it was the sniper attack, which wounded an IDF officer, that ultimately triggered a sequence of events leading to a major escalation. PIJ was able to drag Hamas into the situation it had created.

What followed was a deadly Gazan onslaught of 690 rockets fired at Israelis. This was accompanied by an anti-tank missile strike on an Israeli civilian vehicle on a highway near Gaza. Four Israeli civilians were murdered in the violence – a number that would have been far higher had the Iron Dome air defense system not intercepted 240 rockets heading for built up areas. The Israel Air Force, for its part, struck over 350 terror targets across Gaza in retaliation, killing approximately 30 Hamas and PIJ operatives, and destroying many high value enemy targets that were embedded within civilian neighborhoods.

Among the terrorists targeted by Israel for air strikes was Ahmed Khudari, who played a central role in transferring Iranian cash to Gaza-based terror organizations.

So why did PIJ try to set Gaza ablaze? It is reasonable to assume that it received encouragement from its sponsor, Iran, to which it owes its allegiance. Additionally, PIJ, which is headed by Damascus-based radical terror chief Ziad Nakhala, is jockeying for prime position as the most militant Islamist faction in Gaza. It is trying to upend Hamas in this competition for power and prestige.

The combination of factors – Iran's radical influence, and PIJ's local initiative to present itself as leader of the jihadist campaign against Israel – caused the terror organization, which has approximately 10,000 armed members, to recklessly try to send Gaza down the path of more conflict. It did so without the slightest care for the fate of the Gazan civilians, which PIJ uses as human shields.

Additionally, a PIJ rocket that malfunctioned led to deaths of a pregnant Palestinian woman and a toddler, despite several reports in the international media that parroted Hamas Health Ministry claims blaming Israel.

"PIJ decided to initiate an operation. It tried to kill IDF soldiers, violating all [past] agreements between Israel, these two terrorist organizations [Hamas and PIJ], and the Egyptians," former national security adviser, Maj. Gen. (ret.) Yaakov Amidror, said Sunday during a conference organized by the Israel Project.

PIJ "tried to cheat Hamas, and tried to hide" its actions, but that it did not succeed, Amidror said.

"Why did PIJ do it? The answer is, again, and again, Iran. The Iranian interest is another operation in Gaza. The Iranians want to be free to continue doing what they are doing in Syria," Amidror said, referring to Tehran's ongoing attempts to build attack bases in Syria – efforts that have been thwarted by reported Israeli air strikes.

The Iranians might be hoping that "Israel will be busy focusing on Gaza and will not have enough energy" to focus on Syria, Amidror said.

Hamas, for its part, "couldn't stay out and was grabbed by PIJ into the operation." Any future truce, Amidror warned, will be in jeopardy if Hamas fails to rein in PIJ, and no amount of Qatari money that floods into Gaza will stop the organization from launching further attacks.

"We understand Hamas is the stronger force in the Gaza Strip and our expectations are that they will take responsibility. Unlike PIJ, Hamas [has] some obligations towards the population of Gaza. The PIJ's obligation is to Iran," Amidror said.

While both groups are extremists, the fact that Hamas has a governing role means it is less free to pursue its radical ideology than PIJ, he added. "This is the big difference between them."

On Saturday, IDF spokesman Lt. Col. Jonathan Conricus confirmed that "over the last week, the PIJ has been trying to destabilize the area and trying to execute different terrorist attack, below the threshold, without being accountable or taking responsibility for the attack, while trying to outsmart or trick Hamas."

Conricus added that the group "tried numerous covert attempts, parallel to them trying to observe an appearance of coordination with Hamas. We see that Hamas has not been able, so far, to implement its rule or really control PIJ."

None of this should give the misleading appearance that Hamas has abandoned its terrorist ways. It's just that Hamas's policy is to try and set the West Bank, and Israel's streets, ablaze with terrorism, while keeping the fire away from its rule in Gaza.

For proof of Hamas's ongoing terrorist activities, one need look no further than Monday's Israeli air strike on an eight-story building in Gaza's Rimal neighborhood, used by Hamas as the headquarters for its West Bank terrorism operations. The strike is an indication that Hamas in Gaza remains highly active in trying to coordinate attacks in the West Bank.

Hamas is seeking to export terrorism to the West Bank, and to keep its home turf in Gaza out of the line of fire. It remains far from clear whether Iran's arrowhead in Gaza, PIJ, is prepared to accept that formula.

"What happened in Gaza is a live exercise in preparation for the great battle that we see as inevitable," Nakhala told the Lebanese Al Mayadeen television channel.