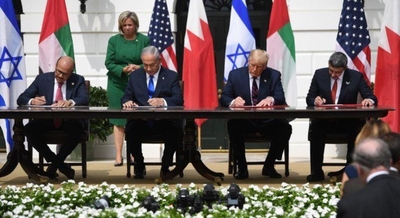 Iran is escalating threats toward the United Arab Emirates (UAE) and Bahrain after the United States helped broker peace deals between Israel and the two Gulf states.

Following the peace agreements between both Israel with the United Arab Emirates and Bahrain and the normalization of the relationships between the latter countries to Israel, sponsored by the United States, the Iranian regime escalated its threats towards both countries in an unprecedented manner.

"Any apparent or clandestine activity by the Israeli intelligence services or their agents in the Islamic Republic or the region, the response will not be directed at the Zionist entity only, and the UAE will be part of the response," said Iranian deputy House Speaker Hassan Abdel Lahian.

"Alliance with the Zionist regime will put the security of Bahrain and the Emirates at a greater risk than in the past," a Sept. 13 statement from the Iranian parliament's National Security and Foreign Policy Commission warned.

"The executioner ruler of Bahrain should await the harsh revenge of the Mujahideen (jihadist fighters) aiming to liberate Quds (Jerusalem) and the proud Muslim nation of this country," Iran's terrorist Revolutionary Guard Corps (IRGC) said in a statement.

Iran has tried to carry out attacks in Bahrain before. It foiled a terrorist plot in March 2018, arresting a militant cell comprised of 116 IRGC members. "The network was planning to target Bahraini officials, members of the security services... vital oil facilities and industries, with an aim to disturb security and public order and undermine the national economy," Bahrain's Interior Ministry alleged. Iran rejected the Bahraini accusations as "baseless, repetitive accusations."

Bahrain claimed that IRGC affiliates, including Iraqi militia groups such as Asaib Ahl al-Haq and Lebanese Hizballah were involved in the foiled attack.

In August, the IRGC threatened the UAE with a "dangerous future" after the country signed its peace deal with Israel.

"They (the UAE) better be mindful," said Iranian President Hassan Rouhani. "They have committed a huge mistake, a treacherous act. We hope they will realize this and abandon this wrong path."

Rouhani reiterated his threat last month and questioned the faith of the Arab Gulf leaders who signed the deal with Israel. "Some of the region's countries, their people are pious Muslims but their rulers neither understand religion nor [their] debt ... to the nation of Palestine, to their brothers speaking their language," he said.

Iran still sponsors some of the Middle East's most notorious terrorist groups including Hamas, Hizballah and Yemen's Houthi rebels. The Houthis threatened to target UAE cities last month. The UAE and Bahrain are members of the Saudi-led Arab coalition fighting the Houthis in Yemen.

Hamas leader Ismail Haniyeh echoed Iranian threats when he told Hizballah's Al Manar television station that the "UAE will suffer a lot as a result of the deal with the 'Zionist Entity' and history shall not forgive anyone."

Hizballah leader Hassan Nasrallah described the Emirati deal as a "betrayal to Islam and Arabs."

Tensions between Iran and the UAE predate the 1979 Islamic Revolution. Iran has occupied the Emirati islands of Greater Tunb, Lesser Tunb and Abo Mosa since 1968. "Iran's sovereignty over the Iranian islands of Abu Musa, the Greater Tunb, and the Lesser Tunb is definite and irrefutable," an Iranian Foreign Ministry spokesman said Sept. 30.

Iran may fear that the peace agreements could pose a threat to the Islamic Republic if Israel can turn them into "a foothold in the Emirates, and in broad terms, in the Gulf" that ultimately includes a military presence, the Lebanese-based Iranian affairs news outlet Jada Iran reported.

Bahrain believes that the peace treaty with Israel will strengthen the gulf kingdom in face of the growing Iranian threats to its safety and sovereignty. "Iran has chosen to behave in a dominating way in several forms and has become a constant danger that harms our internal security," said Bahraini Interior Minister Rachid Bin Khalifa. "We are a state that is determined to develop our national capabilities, and our old and modern strategy is based on strong allies to confront potential threats."

Iran has repeatedly threatened to close the strategic Strait of Hormuz, the largest waterway for the global energy supply, with an estimate that between 40 to 60 percent of global oil exports pass through it. Iran wants to project naval control in the Arabian Gulf. It seized a British oil vessel passing through the Straits of Hormuz in August 2019 and detained its 23 crew members, claiming it collided with a fishing boat. The United Kingdom called it "state piracy." That same month, Iran seized an Iraqi vessel and a third tanker in the same month claiming it was smuggling 185,000 gallons of diesel. The British oil tanker was released two months later by Iran.

The United Arab Emirates is considering extending a pipeline from its oil fields to Israel to avoid having oil tankers pass through the Straits of Hormuz.

The Iranian fear could be exacerbated by the possible signing of similar treaties between Israel and Saudi Arabia, Sudan, Oman and others. Iran's isolation was accentuated when the Arab League refused a Palestinian request to condemn the UAE for signing the peace treaty with Israel.

"Iranian militias are present in Syrian lands and similar militias are jeopardizing the stability of a number of Arab countries and that is an unprecedented situation," he added.