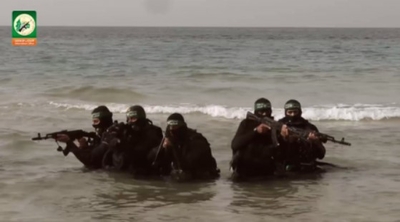 The naval division of Hamas's military wing is not often in the international headlines, despite being busy year-round with planning terrorist raids on Israel's coastline, and attacks on sensitive targets.

But it came under the media spotlight earlier this month, when unconfirmed media reports claimed that a senior commander from the Hamas naval force fled Gaza on an Israeli naval boat. According to those initial reports, which received widespread international coverage, the Hamas operative fled with his laptop, surveillance equipment, and sensitive documents.

In the ensuing fallout, Hamas's Interior Ministry reportedly arrested 16 of its own members, mostly from within the group's military wing, the Izzadin al-Qassam Brigades, as part of an internal investigation into alleged espionage for Israel.

But the accuracy of earlier claims about the identity of the fugitive were thrown into question, after Israel's Shin Bet domestic intelligence agency announced Thursday that the man who fled last month swam into Israeli waters on his own and belonged to a Hamas anti-aircraft missile unit. He said he was facing "personal difficulties on the family front" and that he was "being pursued and slandered by senior Hamas figures."

The man, named by the Shin Bet as 24-year-old Izzadin Hussein, from northern Gaza's Jabaliya district, was taken into IDF custody and transferred to the Shin Bet for questioning. The investigation revealed that in 2013, Hussein was drafted into Hamas's military wing, and from 2018 until his escape, he served as a member of Hamas's air defense unit, where he had a command role as responsible for a cell of shoulder-fired missile launchers.

"In the context of this role, he stored in his home an anti-aircraft missile, and was under orders to fire it as an Israeli helicopter should it land near his home in Gaza, in order to kill or kidnap Israeli soldiers," the Shin Bet said in a statement. "Hussein learned about various Israeli Air Force aircraft and their roles, anti-aircraft missiles, and about binoculars and cameras in order to conduct surveillance of Israeli aircraft movements in Gazan skies."

The Shin Bet said the investigation revealed a wealth of new intelligence about Hamas.

Despite the initial uncertainty about the man's identity, the reports form an important reminder of a broader trend, which is that Hamas continues to prioritize the build-up of its terrorist army, and is working to improve its strike capabilities in multiple areas, including anti-aircraft missiles and the naval attack force. Hamas's naval division is a vital component of its future attack plans.

Formed after 2009's Operation Cast Lead, the naval commando unit made headlines during Israel's 2014 conflict with Hamas, when members of the scuba unit landed on southern Israel's Zikim beach, before being killed by IDF fire.

Since then, Hamas has worked hard to improve the unit. By the IDF's own accounts, its sea force has "immensely improved" in recent years, in part to compensate for the loss of Hamas's ability to use tunnels to infiltrate Israel with armed killing squads. The improvements include practicing the use of quadcopters in order to bomb navy ships, training to send boats and rafts packed with explosives, the use of floating explosive devices, and digging undersea tunnels for deploying scuba attackers.

The IDF closely monitors such efforts, which are, like other Hamas force build-up programs, partly disguised as civilian activities. The Israel Navy is responding to the threat with underwater sonar detection sensors, exercises in which Israeli naval forces drop underwater depth charges to strike the Hamas frogmen, and a recently-built sea barrier on the southern Israeli coastline, complete with a high fence equipped with advanced sensors. The 200-meter barrier is mostly made up of an underwater wall of boulders.

But the barrier is no insurance against future raids by the Hamas commando unit, and the threat is not limited to armed Hamas scuba squads. The Izzadin Al-Qassam Brigades has received Iranian operational instructions on how to launch swarm-like boat attacks on the Israel Navy, and is preparing such capabilities for clashes with Israel.

For its part, the Israel Navy must be able to distinguish between Gazan civilian fishing boats and bomb-laden Hamas vessels disguised as fishing boats.

Brig. Gen. (ret.) Yossi Kuperwasser, former head of the research division in the IDF Military Intelligence Directorate, and a senior research fellow at the Jerusalem Center for Public Affairs, told the Investigative Project on Terrorism that naval attack force is a top Hamas priority.

"This is due to the fact that Hamas is naturally exposed to the [Mediterranean] sea. One of the only outlets that it has is out to the sea. This is good for weapons trafficking, for defense, and for offensive attacks, which is the headline of the Hamas naval force," Kuperwasser said.

"Hamas is looking for ways to bypass [Israel's] closure on Gaza, and to do this parallel to its underground tunnel concept. There are two sea levels – the sea surface and below-sea level, and this forms a very important component for Hamas in its ability to launch attacks on strategic sites in Israel," he added.

The Israeli coastline has sensitive targets such as power stations, while offshore natural gas drilling rigs form another potential target.

"Hamas clearly understood that attacks via the sea has strategic significance, both because they can hit sensitive targets and because they can use it to infiltrate into Israel in a way that is difficult to prevent. An infiltration in itself would be a strategic achievement. Hence, they invest a lot in this," Kuperwasser stated.

The use of the sea to build an asymmetric strike force has been a pattern that other Israeli adversaries have been developing as well, Kuperwasser noted, pointing to Hizballah, which has made significant investments in a naval force, and to Iran, which has been building swarms of fast-boats for attack missions.

"In asymmetric warfare at sea, there is a big advantage for those who employ a secretive naval force," said Kuperwasser. "Hamas is buying diving equipment all of the time, as well as other forms of equipment, and training its personnel. This is a very high priority for them."