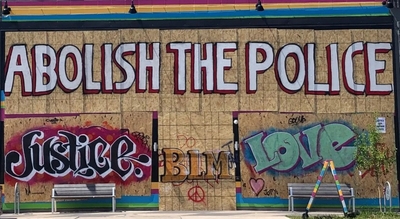 What began as a sincere cry for justice in the tragic killing of George Floyd by Minneapolis police officer Derek Chauvin has evolved into a critical examination of policing in the United States. Some are calling for drastic changes in the way police departments operate in society.

And while that call has garnered support and triggered debate, it has also produced confusion.

Some voices demand that we "defund the police." What that actually means is not yet clear.

A more dangerous clarion call has come forth reaching fever pitch among some and that is to put an end to policing altogether. Mariame Kaba, director of Project NIA, penned an oped in the New York Times recently Friday calling for just that.

"The surest way of reducing police violence is to reduce the power of the police, by cutting budgets and the number of officers," she wrote. "But don't get me wrong. We are not abandoning our communities to violence. We don't want to just close police departments. We want to make them obsolete."

Words are important and while we can debate what is or isn't meant by the word defund, there is no ambiguity in the word abolish.

The group Muslims4Abolition, which counts Louis Farrakhan's Nation of Islam and Linda Sarsour's MPower Change among its supporters, wants "... to be part of the movement to abolish bail, abolish jails, abolish the police, abolish prisons, abolish immigration custody, abolish state surveillance, and to build the world we deserve."

In other words, they want to completely eradicate every important component in the criminal justice system.

"It is a fact," they claim, "that police brutality is a leading cause of death amongst young Black men."

While black people, especially black men have been killed by police, it is far from a leading cause of death.

Accidents, illness and homicide are the dominant causes of death among black men 44 years old and younger, Centers for Disease Control data shows.

So far, the movement to abolish police seems limited to activists and protesters. Elected officials seem more focused on reforms.

But what would the Muslims4Abolition world look like if the politics changed, and who would be happiest in it?

One group that probably would be ecstatic over the thought of no cops are the terrorists.

The role of the local police officer and how he or she acts as a deterrent to terrorism is often overlooked.

We think of elite federal agencies like the CIA, FBI, or the even Navy Seals as the vanguard in defense from terrorist attacks. Too often, we forget the numerous occasions where it was a local cop who saved the day.

The FBI's vaunted Joint Terrorism Task Force (JTTF) is comprised of city, state, and local law enforcement officers. The JTTF could not successfully operate without them.

Historically it has been a local officer or beat cop simply doing his or her job that deterred or thwarted the terrorists' evil goal.

For example, it was a New York Police Department cop named Don Sadowy who in 1993 uncovered the rear axle of the van used in the first World Trade Center bombing. That piece of evidence was used to identify the perpetrators who had rented the van from a company in New Jersey. Before becoming a cop, Sadowy attended an Automotive High School in Brooklyn where he learned to distinguish and recognize every component part of a motor vehicle. To the untrained eye, that axle might have simply appeared as another piece of twisted metal in the rubble.

Two years later, a routine traffic stop by Trooper Charlie Hanger resulted in the arrest of domestic terrorist Timothy McVeigh, responsible for the bombing of the Alfred P. Murrah Federal Building in Oklahoma City, which killed 168 and injured hundreds more.

Hanger later remembered noticing "an old yellow Mercury" driving with no license tag. After pulling the car over, Hanger noticed a bulge in the driver's jacket. It turned out to be a loaded .45 caliber Glock, which led to an arrest.

It was hours later that Hanger learned he nabbed the Oklahoma City bomber.

In 1997, two Long Island Railroad police officers with less than two years on the job, John Kowalchuk and Eric Huber, played key roles in uncovering a plot by Islamic terrorists to bomb the New York City subway. They were approached by someone with information regarding a terrorist bomb factory in Brooklyn. The officers relayed the details to the NYPD Emergency Services Division, which responded to the location and captured the terrorists and defused the explosives before innocent lives were lost.

"This whole event probably didn't take no more than 10 and probably 15 seconds," Stevens remembered several years later. "I'm a pretty good shooter. I'm not a great shooter. My training kicked in. I wasn't formulating a plan."

In 2017, NYPD officer Ryan Nash single-handedly captured Sayfullo Saipov, an Islamic terrorist who had just mowed down eight innocent civilians with a truck and injured 11 others during an ISIS inspired attack. Officer Nash was on a routine call at a nearby high school when he heard the call of the terror attack.

Saipov tried to run off after crashing his truck, but Nash and other officers were able to stop him. Nash shot Saipov in the abdomen, but the suspect recovered and remains in jail pending trial.

How many more people might have been injured or killed that day if Nash and his fellow officers weren't there to respond?

The list goes on of ordinary men and women wearing the uniform and carrying the badge who, with extraordinary courage, save lives, prevent tragedies, and capture the bad guys every day.

Calls for police reform are reasonable.

But to abolish the police would mean removing the very fabric of American society that protects us. That is neither wise nor well thought out. It is perilous.