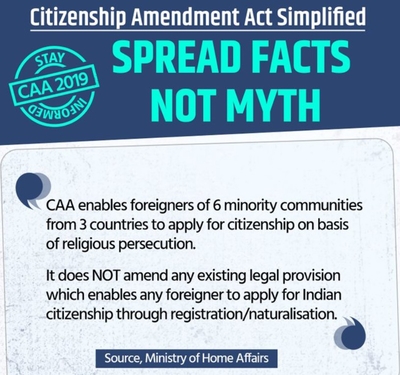 A fact sheet on a contentious amendment to a decades-old Indian citizenship law released last week by the bipartisan and federally-funded U.S. Commission on International Religious Freedom (USCIRF) regrettably pushes a one-sided narrative.

The fact sheet argues that the Citizenship Amendment Act (CAA) actually is part of a larger scheme to strip Indian Muslims of their citizenship. The USCIRF paper gives strong voice to CAA critics, who denounced it "for violating India's secular foundations and expressed worry that it would be used to disenfranchise India's sizable Muslim population." In doing so, the fact sheet fails to include the perspectives of advocates who deny the CAA opens the door to revoking anyone's citizenship.

USCIRF is sponsoring a hearing on March 4 to "discuss how citizenship laws are used to target religious minorities, particularly in Burma and India."

India's citizenship law, passed by the parliament in December, offers a fast-track to citizenship for persecuted Hindu, Sikh, Buddhist, Jain, Parsi, and Christian minorities who were forced out of Afghanistan, Bangladesh, and Pakistan – the three Muslim-majority countries in South Asia.

"These are Islamic countries and Muslims are the majority there," leading Indian journalist and conservative commentator Swapan Dasgupta said in a January interview with Outlook Magazine. "Two of the countries [Bangladesh and Pakistan] are directly affected by Partition. Afghanistan has been put in for the sake of 40,000 Sikhs, who left the country when Taliban came in."

Persecuted Muslims, such as Baluchis and Ahmediyas in Pakistan, and Rohingyas in Myanmar, are still eligible to apply for Indian citizenship under the country's 1955 Citizenship Act, the government says. In the past six years, 2,830 Pakistanis, 912 Afghanis, and 172 Bangladeshis, hundreds of whom are Muslims, have been granted Indian citizenship.

The CAA's exclusion of Muslims has led to countrywide protests with reports of clashes between pro- and anti-CAA groups. Fresh violence broke out Monday after the two sides came to blows and hurled stones at each other. The death toll stood at 24 people Wednesday morning.

"The law is primarily aimed at tying up loose ends of the partition in Eastern India," Dasgupta said. Its "primary beneficiaries" are minority Hindu and Buddhist communities who were forced to flee systematic harassment and persecution in East Pakistan after the 1947 partition of British India and later after the region's secession from Pakistan and the creation of an independent Bangladesh in 1971.

Dasgupta argued earlier against "equating" Hindu and Buddhist refugees from Bangladesh with their "persecutors"—members of the Pakistan-sponsored Razakar militia—that perpetrated atrocities on minorities during Bangladesh's 1971 liberation war and "who too fled Bangladesh after liberation and sneaked into India."

"In attempting a contrived even-handedness, the CAB's [Citizenship Amendment Bill] critics are guilty of this perversion," Dasgupta said, adding the CAA "has corrected this distortion and given the Hindus from Bangladesh their social dignity and rightful place in India."

Dasgupta was a member of the parliamentary committee that drafted the bill and serves as a presidential nominee to India's upper house of parliament. He is a member of India's ruling nationalist Bhartiya Janata Party (BJP).

Akins is a protégé of the Muslim Brotherhood-tied Akbar Ahmed, the Ibn Khaldun Chair of Islamic Studies at American University. In a 2017 India Times article, Akins argued that the Trump administration and ISIS "look like two sides of the same coin":

"ISIS sees their own struggle as a civilizational war between Islam and the forces of Western civilization, a message reinforced by the Trump administration's rhetoric and policies. This message is then used in their own recruitment efforts," he wrote.

He spoke at a Jan. 27 congressional briefing on the CAA co-sponsored by the Indian American Muslim Council (IAMC) and the Council on American-Islamic Relations (CAIR). Both groups have ties to Islamist movements.

"USCIRF has long expressed its concern that this law is part of an effort by the BJP government to create a religious test for Indian citizenship in line with their vision of a Hindu state," Akins said. If implemented along with an updated National Register of Citizens (NRC), an official record of Indian citizens, the CAA "could become a weapon to target millions of Indian Muslims potentially leading to their disenfranchisement."

But Dasgupta dismissed the allegations: "CAA has nothing to do with Indian Muslims," he said last month. "The NRC is a mythical concept at present. The NRC has neither been formulated nor presented in the parliament. It has to be debated in the parliament and a design has to be shown. The process has not started yet."

The Indian government also denies any connection between the two pieces of legislation. "CAA is a separate law and NRC is a separate process. The CAA has come into force nationwide after its passage from Parliament, while the NRC rules and procedures for the country are yet to be decided," a December primer said.

IAMC, which was formerly known as the Indian Muslim Council in the U.S. (IMC-USA), was founded by Shaik Mohammad Ubaid to fight Hindu extremism in the wake of the 2002 Gujarat riots that killed more than 1,000 people, mostly Muslims. The riots were triggered by the burning of a train carrying 59 Hindu pilgrims, all of whom died in the attack.

Ubaid is a past secretary general for the Islamic Circle of North America (ICNA), a leading Jamaat-e-Islami (JI) outpost in the U.S. The JI, a South Asian Sunni revivalist movement, has provided an ideological platform and recruiting base for the U.S.-designated terrorist group Hizbul Mujahideen.

CAIR emerged in 1994 from a Muslim Brotherhood-created Hamas-support network called the Palestine Committee. The organization operates under the guise of being a benign civil rights group, but has a long history of serving as a front for Hamas, in undermining counter-terrorism actions and by fabricating conspiratorial narratives against the government in rationalizing the group's support of terrorism.

The ruling BJP government has accused opposition parties of politicizing the issue for political gain. Four Indian states that are controlled by opposition parties have rejected the legislation and won't enforce it. More than 300 prominent personalities from the literary and academic communities issued a statement opposing the law. India's top court has heard 144 petitions for and against the CAA, but thus far has made no rulings.

Dasgupta acknowledges the Indian government "underestimated the potential opposition" to the law and its "communication has been imperfect." He also blamed the media for being "extremely partisan" in its reporting on the issue.

CAA supporters also point to a 30-year-old American law which fast-tracks citizenship for certain religious minorities over the exclusion of others. The Lautenberg-Specter Amendment has been extended with wide bipartisan support every year since its 1989 passage. The original legislation aimed to help Jews and evangelical Christians fleeing persecution in the former Soviet Union. A 2004 amendment expanded the law to include Baha'i, Christians, and Jews from Iran.

Since its founding in 1998, USCIRF has played a critical role in defending religious freedoms and beliefs around the world, but its recent biased advocacy against India's citizenship law casts a shadow over this venerable institution and its mission.