Israel Leads Operations Against Iran From the Levant to Iraq 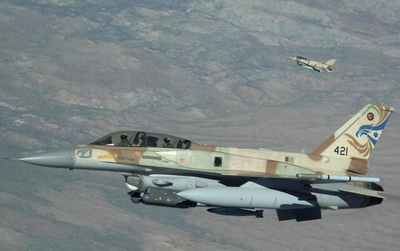 The United States confirmed Sunday that it carried out airstrikes along the Syria-Iraq border against military positions belonging to Kataib Hizballah, a Shi'a militia affiliated with Iran. The strike comes shortly after Friday's deadly rocket attack on a Kirkuk-based installation killed an American contractor and injured several other U.S. soldiers and Iraqis. One U.S. source told Agence France Presse that Iranian-backed armed groups are more of a threat to American interests in the region than the Islamic State.

After the U.S. airstrike, pro-Iranian protesters, including Kataib Hizballah supporters, violently stormed the heavily fortified area around the U.S. Embassy in Baghdad causing two days of unrest and heightened tensions.

While U.S. military action against Iranian-affiliated targets marks a significant development, Israel continues to be a leader when it comes to offensive operations countering Iran's destabilizing regional activities.

Israel is preparing to face repercussions for escalating strikes against Iranian targets in neighboring countries. Israel "will regret" its attacks, which "will not pass without a response," a senior adviser to Iran's supreme leader warned earlier this month. These threats were issued amid alleged Israeli airstrikes in Damascus that reportedly killed three pro-Assad foreign operatives, likely of Iranian origin.

The UK-based Syrian Observatory for Human Rights last week reported another missile strike targeting an Iranian-affiliated militia operating on the Syria-Iraq border. A Hizballah-run military site reportedly was also targeted. Israel is suspected of recently escalating strikes against increasingly emboldened Iranian proxies and partners around Syria's eastern border and even inside Iraq itself. Expanding operations against Iran to Iraq signals a major regional development.

In 2015, Israeli airstrikes in the Syrian Golan killed 11 members of the Hizballah-Iranian axis, including senior Hizballah leaders and an Iranian general who were attempting to set up a base of terrorist operations to target Israel. Since then, Israel has waged a multi-faceted campaign, including kinetic military strikes, against Iranian regime targets across the Middle East. Most reporting of Israeli strikes abroad over the past few years centered on operations in areas bordering the Jewish state: Syria, Lebanon, and Gaza. Iraq, however, does not neighbor Israel and is a central battleground for US-Iranian competition.

Iran continues to exploit instability in Iraq to secretly move ballistic missiles into the country in an effort to strengthen its regional capabilities, American intelligence and military officials say. The United States recently has bolstered its capabilities to counter Iranian threats, sending an additional 14,000 soldiers to the region since May. But this build-up has largely failed to deter Iran from expanding its footprint throughout Iraq and the region. Large stockpiles of sophisticated Iranian missiles threaten American troops and the security of key allies, including Israel and Gulf states. Even short-range rockets based in Baghdad, with a range of 600 miles, could hit Jerusalem.

Iran disguises its destabilizing presence and activities in other countries as part of its hybrid-warfare strategy to minimize the chances for direct retribution. In September, Iran launched missiles against Saudi oil facilities – for which the Yemen-based Houthi insurgent group falsely claimed credit. The missiles' flight path was programmed in a deceptive manner to make it appear as if they were launched outside Iran. At the time, Israel treaded cautiously to allow for a robust response from the international community. That response never came.

Now, Israeli officials are concerned that Iran may try to get away with a similar strike against Israeli targets, according to Israel's Channel 12 News. Most of Iran's efforts to challenge Israel have been covert, usually through the use of terrorist proxies in Gaza or Syria. But Iran repeatedly has demonstrated that it is willing to directly confront Israel in military clashes. For several years, Israel has focused on punishing Iran for entrenching its forces in Syria, in an effort to consolidate a land bridge from Iran through Syria to Lebanon. But the key to Iran's plan runs through Iraq – a predominately Shi'a Arab country which Iran uses to transfer advanced weaponry to Hizballah and other militant partners.

Israel has set red lines throughout the Syrian civil war, focused on preventing "game-changing" weapons from landing in Hizballah's hands and a permanent Iranian military presence in Syria. Initially Israeli leaders never clearly drew their red lines in the sand – whether they would not tolerate Iranian entrenchment in all of Syria or only near the Israeli border. Israeli military Chief of Staff Aviv Kochavi clarified last week that Israel's red line even includes Iraq, in a speech delivered at Herzliya's Interdisciplinary Center.

In the past, Israeli officials sought diplomatic initiatives with the United States and Russia to negotiate a potential buffer zone free of an Iranian presence. But it is increasingly clear that Israel is largely left on its own to counter Iran's spread throughout the Levant region, even if other actors like the U.S. strike Iranian affiliates sporadically.

"It would be better if we weren't alone," Kochavi said. The United States only targeted Kataib Hizballah in Iraq because the terrorist group's missile attack killed a U.S. citizen. For Kochavi and other Israeli military figures, more direct confrontations with Iran are expected into the new year.