After Guns Go Quiet, Hamas Works with Hizballah and Iran to Learn Lessons for Next War 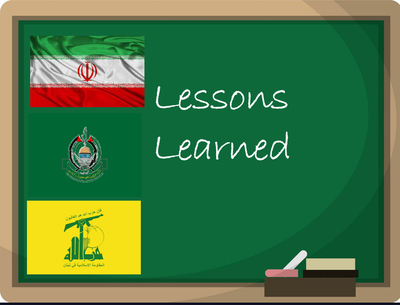 Over a month after the conflict between Israel and Hamas came to an end, a deceptive calm has taken hold, and a new, fateful learning competition is underway.

Hamas, the radical Islamist regime that rules Gaza, is working with its allies in the Shi'ite axis – Iran and Hizballah – to study the latest conflict and share lessons that can help in the next war.

According to an Israeli military source, Hamas is sharing its operational lessons with its allies.

Israel is sharing its own valuable lessons from the 11-day Operation Guardian of the Walls with the United States.

This learning competition shapes future conflicts between Israel and the terrorist armies on its borders. It also influences conflicts throughout the region, affecting any state that must face Iranian-armed, hybrid guerilla-terrorist forces.

The information sharing can help Hamas and its radical allies identify weaknesses in air defense capabilities, make new uses of combat tunnels, find new ways to use weapons such as anti-tank missiles, and search for new asymmetric warfare doctrines.

In the past, Iranian experience in producing and using rocket propelled grenades (RPGs), mortar attacks, and drones influenced Hamas's engineers and its Gazan combat battalions.

Hizballah's systematic use of Lebanese civilians as shields for the organization's arsenals of rockets and missiles has inspired Hamas's military wing to do the same in Gaza.

"In principle, every round of conflict is a learning tool. Ultimately, what we see during conflicts is the result of a learning competition between the two sides," Brig. Gen. (ret.) Yossi Kuperwasser, former head of the research division in the IDF Military Intelligence Directorate, told the Investigative Project on Terrorism.

"Each side learns as best as it can the lessons from the past round, and it tries to apply them in the next conflict," said Kuperwasser, director of the Project on Regional Middle East Developments at the Jerusalem Center for Public Affairs.

While Hamas is more ideologically affiliated with the Sunni Islamist Muslim Brotherhood axis, operationally, it also is a member of the Iranian-led Shi'ite axis, Kuperwasser explained.

Iran is a chief source of funding, training, and weapons-building know-how for Hamas's military wing, and Hizballah has cooperated with Hamas on multiple projects, such as building rocket factories and training camps.

Head of the Class

Fortunately, it is Israel that has proven so far to be the better student of past conflicts, said Kuperwasser. From the time of the 51-day, 2014 conflict with Hamas to now, Israel has remained ahead of its enemies in Gaza – Hamas and Palestinian Islamic Jihad – in terms of preventing surprises and planning capabilities.

"It's true that Hamas developed capabilities that were supposed to deal with the capabilities that Israel developed," said Kuperwasser, citing its launching of heavy rocket barrages designed to overwhelm Israel's improved Iron Dome batteries, the launching of a guided torpedo towards Israel's offshore gas rigs, and the development of drones. Israel had operational answers to all of these attacks, which were developed with Iranian cooperation, and under Iranian guidance, he said.

"This is all an expression of a growing realization in Hamas. According to the realization, relying on the attacks that worked in 2014, such as the firing of sporadic rockets with the hope that Iron Dome would struggle to deal with this, would mean that Hamas itself would struggle to gain achievements this time around. As a result, they went for the large barrages," he stated.

Iron Dome was able to take out 90 percent of the rockets it targeted during the latest conflict, reflecting the significant upgrades that gave it the ability to deal with large salvos.

In addition, anti-tank guided missiles arrived in Gaza with the help of elements "tied to Iran," said Kuperwasser. Hamas fired one such missile at an IDF jeep during the conflict, killing an IDF soldier and injuring two others, one seriously.

Hamas was also aware that its attack tunnels were becoming much more problematic as an offensive tool, due to Israel's underground anti-tunnel wall, which was completed in March.

"They understood their own vulnerability, due to the combat in 2014, when many hundreds of terrorists were killed, leading Hamas to construct the "metro" [a network of underground combat tunnels within Gaza]. This was supposed to defend them," said Kuperwasser. Israel was able to map out sections of the 'Metro' and destroy 100 kilometers of the underground network.

"Some of these things were developed internally by Hamas, others in conjunction with Iran and Hizballah," said Kuperwasser. "Hizballah has many underground assets, including many tunnels near the border with Israel. So we can see many signs that signal joint learning."

It is fair to assume that at this time, senior members of Hamas, Hizballah and Iran are seeking to produce fresh lessons from the May conflict, he added.

The IDF has to monitor this process as best as it can, to stay ahead.

"It has to study the lessons that the other side is preparing, prepare answers to that, while also strengthening its own capabilities to surprise them. This learning competition is set to continue," said Kuperwasser.

Israel has its own lessons to draw, despite its many operational and tactical gains during the conflict, he added.

While Israel was highly successful in merging its intelligence and firepower capabilities, it still has some way to go in better repressing future rocket attacks, and dealing with anti-tank missile fire at Israeli vehicles.

"The IDF, the defense establishment, and defense companies will sit together and study these lessons," said Kuperwasser.

Last week's visit to Washington by IDF Chief of Staff, Lt. Gen. Aviv Kochavi, likely included some talk with senior American defense officials about some of the lessons, such as dealing with enemy drones.

"Everyone understands that drones are a big next threat, including against American forces deployed in the area, as the Commander of CENTCOM (Central Command), Gen. Kenneth McKenzie, has pointed out," said Kuperwasser. "This is also a challenge for U.S. allies like Saudi Arabia and the United Arab Emirates, who are also exposed to the threat."

Saudi Arabia should also be trying to gain Israeli knowledge on how to deal with threats like drones, Kuperwasser said, as its territory has come under repeated, regular fire by Iranian-backed Houthis armed with suicide drones and missiles.

Multiple international media reports have said that Hizballah has played an active role in training the Houthis.

"In short, there is room for joint learning between Israel and the U.S. just as Hamas is doing with Hizballah and Iran," said Kuperwasser. "It is safe to assume that what Hamas shares with Iran and Hizballah will also be shared with the Popular Mobilization Forces [the pro-Iranian militias] in Iraq and the Houthis in Yemen. Israel must try hard to remain ahead in this competition."