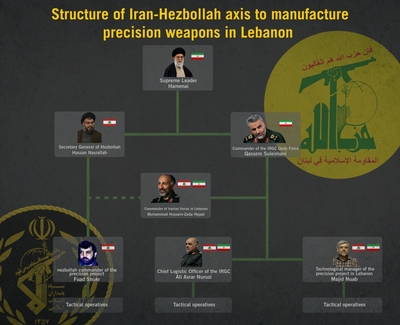 A shadow war raging between the Iranian-led radical Shi'ite axis and Israel became quite public in recent weeks.

This conflict is driven by Israel's determination to prevent Iran from building attack capabilities in Syria, Lebanon, and Iraq.

Shi'ite militia operatives under the command of the Iranian Quds Force fired rockets toward Israel early Monday from the outskirts of Damascus, according to the Israel Defense Forces (IDF). All of the projectiles failed to cross into Israel and fell in Syria. The Quds Force is the secret military force of the Iranian Revolutionary Guards (IRGC) operating around the globe.

That attack appears to be a response to a reported air strike on positions held by Iranian-backed Shi'ite militias at the Albukamal border crossing linking Syria and Iraq.

The Albukamal border crossing was the site of a May 2018 air strike, attributed by media reports to Israel. Iran has earmarked the crossing as a central link in its land corridor project, designed to enable Tehran to flood Syria and Lebanon with ground convoys carrying missiles, fighters, logistics, and military platforms.

In its haste to respond, the Quds Force appeared to launch an ineffective rocket attack, perhaps reflecting the fact that Israel's preventative campaign in Syria has succeeded in denying the Iranians the opportunity to entrench themselves militarily in Syria.

Meanwhile, the missile upgrade program, led by Hizballah and its Iranian sponsor, has intensified in recent years. This increased effort has seen Hizballah build secret weapons sites across Lebanon, for the purpose of converting inaccurate rockets of various ranges into precision guided missiles, according to new information released by the IDF.

This program, if continued without disruption, would constitute a new level of threat to Israel, giving the Iranian-led Shi'ite radical axis an ability to send accurate missiles towards Israel's sensitive strategic sites.

In effect, it would mean that Hizballah could target Israel's power plants, airports, seaports, military bases, and other critical sites. Israel has made it clear, in both deed and action, that it will not tolerate the build-up of such a capability, and the rising tensions surrounding this program carry with them the risk of deteriorating into regional conflict.

According to international media reports, Israeli explosive drones on Aug. 25 targeted an Iranian machine in southern Beirut which produces high-grade fuel for guided ballistic missiles. Hizballah vowed to respond by bringing down an Israeli drone – a threat it said it made good on early Monday. The IDF said that the drone had crashed, and that no sensitive information was at risk.

Hizballah's Sept. 1 decision to fire a volley of anti-tank guided Kornet missiles at an IDF base near the Lebanese border, narrowly missing an IDF vehicle, came days after Israel struck an Iranian-led terrorist cell in Syria in the final stages of preparing an explosive drone attack on Israel.

Ultimately, these incidents reflect a deeper struggle in which Israel is determined to prevent Iran and its terror proxies from building up unacceptably dangerous levels of firepower that would place Israel's civilian home front in grave danger.

Between 2013 and 2015, the IDF reported, Iran started smuggling ready-to-use precision missiles from Iran, via Syria, to Hizballah in Lebanon.

Most of these efforts were thwarted by "attacks attributed to Israel," the IDF said, and the Iranian project failed. As a result, in 2016, Iran and Hizballah shifted their tactics. Instead of transporting whole guided missiles, they decided they would convert existing imprecise rockets into guided missiles, and do this on Lebanese soil.

The Iranian plan involved producing unguided rockets at the Syrian Center for Scientific Research, known by its French acronym, SERS, a government weapons research and production center in northwest Syria. The second half of the plan was based on smuggling precision components from Iran to Lebanon.

On Lebanese soil, crews were to convert the rockets into precise missiles, and Hizballah set out to establish conversion facilities across Lebanon, including in the capital of Beirut.

Hejazi commanded over two senior IRGC officers: Col. Majid Nuab, a technological manager at the IRGC's precision project, who specializes in surface-to-surface missiles, and Brig. Gen. Ali Nuruzi, the IRGC's chief logistics officer. He is responsible for transferring components from Iran through Syria to the Lebanese project sites.

Fuad Shukr, a senior Hizballah commander, was named as the Shi'ite organization's commander of the precision project. An adviser to Hizballah Secretary-General Hassan Nasrallah and a member of the most senior forum, the jihad council, Shukr headed up the planning and execution of the 1983 bombing attack on the U.S. Marines barracks in Beirut, which killed 241 Americans. He is on the Department of State's most wanted list.

The Quds Force used three main channels to smuggle precision missile components into Lebanon, according to the IDF. The first is ground, using official border crossings, like the Masnaa, Syria-Lebanon crossing. The second is via civilian flights from Iran landing at Beirut's Rafiq Hariri International Airport. The third is through the sea, via the International Port of Beirut.

Yet despite the new tactic, between 2016 and 2018, the Shi'ite radical axis failed to meet its goals. In the past few months, Israel noticed an uptick in Iranian and Hizballah efforts to produce guided missiles in Lebanon. This effort involved a doubling down on construction of production and missile conversion sites in Lebanon.

These sites, according to the IDF, involve the assembly of missile stabilizers, engines, control and guidance components, and explosive warheads, for turning inaccurate rockets of various ranges into precision missiles.

On Sept. 3, the IDF exposed a Hizballah facility in Bekaa Valley in eastern Lebanon to convert and manufacture guided missiles. Set up by Iran and Hizballah, the site recently increased its activities. It features a "dedicated assembly line for precision weapons and transfer of sensitive equipment," the IDF said. The presence of a mass production center for guided missiles is the kind of threat Israel has warned it will not tolerate.

The Bekaa Valley missile production site contains machines to make missile warheads and motors, creating projectiles that have an accuracy rate of under 10 meters – considered highly precise in military terms.

"In order to manufacture the missiles, Iran supplies special machines and instructs the manufacturing crews, in addition to continuous supporting guidance," the IDF said.

Hizballah, in fear of strikes, evacuated valuable equipment from the compound to "civilian locations in Beirut," according to the Israeli military.

"What we're dealing with in this specific scenario is Hizballah's guided munition project in Lebanon, which we have exposed and have no intention of allowing to exist because of the severity of the threat," IDF international media spokesman, Lt. Col. Jonathan Conricus, said after Hizballah's Sept. 1 anti-tank missile strike. "That is the context from our point of view."

In response to the Israeli strike on the Quds Force drone squad a week earlier, Conricus said, "I know that Israel and the IDF are fighting from within Israel to defend our civilians and sovereignty. And I know that the Iranians are, on average, 600 to 1,000 kilometers away from their borders. They're trying to attack Israel. We understand that the Iranians will try to continue to attack. We are ready, and preparing for such operations... We are prepared for a large number of different scenarios and have the necessary offensive plans to retaliate."

In addition to these developments, new information has surfaced about Quds Force activity in Syria, following Israel's thwarting of a drone attack from Syrian territory.

Previously, the IDF identified the Quds Force as the entity that organized, trained, and commanded the drone squad, and the IDF identified two Lebanese Shi'ite members of the squad by name. The operatives, Hasan Zbibi, from the Lebanese town of Nabatieh, and Yasir Dahir, from the village of Blida, were killed in the IAF strike on their complex south of Damascus. They had previously traveled to Iran on many occasions, the IDF said, adding that they "underwent training" in operating unmanned aerial vehicles and explosive drones. They flew to Iran on-board Mahan Air civilian flights for training, the IDF said, releasing images that appear to have been taken with one of the operatives' cell phones on board the flight.

In the following days, new information revealed the identity of the Quds Force's Syria Corps. The Corps is headed by an Iranian General Javad Ghaffari, who operates under the direct command of the Quds Force chief Qassem Soleimani.

Ghaffari not only oversaw the drone attack squad – he also commands tens of thousands of Shiite militia members from various countries active throughout Syria, including in Damascus, Aleppo and eastern Syria. Ghaffari recruited the drone squad members – four Lebanese men – trained them and supervised the execution of the attack, before the squad was destroyed in an Israeli airstrike.