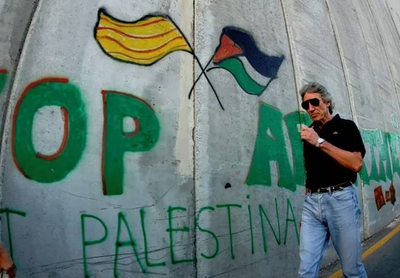 An anti-Semitic film, "The Occupation of the American Mind" will be shown Tuesday in Takoma Park, Md. at a taxpayer-funded screening despite public pressure to reverse course. The movie peddles in anti-Semitic tropes that claim Jewish and pro-Israel groups have disproportionate power over U.S. foreign policy and in effect brainwash Americans to support Israel.

"A municipality is using taxpayer money to show a widely rejected 'documentary' narrated by a notorious anti-Semite [Pink Floyd bassist Roger Waters] that peddles anti-Semitic canards," Ronald Halber, executive director of the Jewish Community Relations Council of Greater Washington, told the Jewish Telegraph Agency earlier this month. "They should be bringing people together, not dividing them."

After the movie, Islamist and anti-Israel figures from the Council on American-Islamic Relations (CAIR), American Muslims for Palestine (AMP), and Jewish Voices for Peace (JVP) will discuss the film. Each group actively promotes the Boycott, Divestment, and Sanctions (BDS) movement devoted to coercing the Jewish state.

BDS – which seeks to isolate Israel economically and culturally – is considered anti-Semitic because it singles out the world's only Jewish state and ignores countries with far worse human rights records.

CAIR's efforts to derail this bill or promote an anti-Semitic film are not surprising given the organization's record for spreading anti-Israel views that often transcend into the realm of bigotry.

CAIR is actively working to stifle an "Anti-Semitism Awareness" bill that directs the U.S. Department of Education to adopt a widely accepted working definition of anti-Semitism.

Elements of this working definition encompass modern anti-Israel sentiment that "crosses the line into anti-Semitism." That includes denying the Jewish people's right to self-determination, claims that Israel was founded as a racist entity, and applying double standards against Israel not expected of other democracies.

To add insult to injury, Takoma Park officials confirmed the participation of another radical Islamist: Taher Herzallah, associate director of Outreach & Grassroots Organizing for American Muslims for Palestine (AMP), according to a JCRC press release on issued Monday.

Herzallah is one of the "Irvine 11" prosecuted in 2010 following a hostile plan to silence a University of California, Irvine speech by former Israeli Ambassador Michael Oren. Three years later, as AMP's national campus coordinator, Herzallah proudly justified Hamas rocket fire into Israel while calling images of wounded Israeli soldiers "the most beautiful sight."

In November, Herzallah rationalized the slogan, "from the river to the sea, Palestine will be free," a call that leads to Israel's destruction.

"If giving Palestinians their right to live freely means the destruction of Israel, then so be it," Herzallah wrote on Facebook.

It's no surprise that he also called for violence against Israelis.

"Israelis have to be bombed, they are a threat to the legitimacy of Palestine, and it is wrong to maintain the State of Israel. It is an illegitimate creation born from colonialism and racism," Herzallah said during a 2014 AMP conference.

"Our goal is to create a space for people to listen, critique, discuss, and learn from each other," Stewart said in a July 12 statement.

Inviting Islamist figures who espouse extremist positions to participate in publicly-financed events, however, is the opposite of creating "a space for people to listen." In numerous speaking engagements Herzallah, like other U.S.-based Islamists, has used his platforms to preach hate and spread extremism in an effort to intimidate supporters of Israel. The film screening likely will be no exception.