Despite Criticism of Israel, Hamas TV Station is a Legitimate Target

Hamas and other Palestinian terrorist groups in Gaza fired over 460 missiles and rockets targeting communities in southern Israel Monday and Tuesday, killing one person and injuring at least 108 others.

Greenwald says that the Israelis are "not even pretending this was accidental; they admit they were targeted." 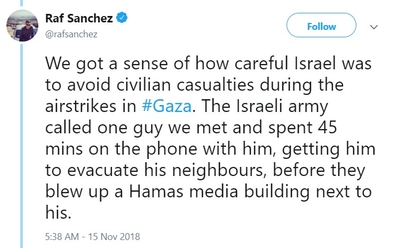 Enemy media and communications infrastructure can be justifiable targets in an armed conflict.

For example, an International Criminal Tribunal committee, created to review NATO's bombing campaign in the former Yugoslavia, argued that if media stations are used to incite crimes, then they can be a legitimate target for military action.

The stations also help Hamas communicate with its fighters.

"The [Al-Aqsa TV] station broadcasts violent propaganda against the State of Israel and its citizens, as well as operational messaging to militants, which include methods for carrying out attacks against civilians and soldiers and way to obtain weapons," the Israeli military said.

In 2010, the U.S. Treasury Department designated Al-Aqsa Television because it is controlled and funded by Hamas – a designated terrorist organization.

"Treasury will not distinguish between a business financed and controlled by a terrorist group, such as Al-Aqsa Television, and the terrorist group itself," Stuart Levey, former Under Secretary for Terrorism and Financial Intelligence, said in 2010.

To limit casualties, the IDF used roof-knocking techniques to warn people inside the Al-Aqsa TV station, allowing all of the personnel inside to evacuate.