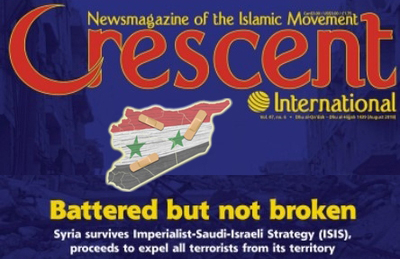 As the United States ramps up its sanctions campaign against the Islamic Republic of Iran to pressure it to stop its regional aggression and support for global terrorism, its North American supporters aggressively push pro-regime propaganda.

An editorial in the August issue of the Ontario-based Crescent International magazine calls terrorism an "integral part of U.S. foreign policy." It decries support by the U.S. and Iran's arch-enemy Saudi Arabia for the Mujahideen-e Khalq Organization (MKO), an exiled Iranian dissident group that seeks to overthrow Iran's government.

"With zero support in Iran and its ranks rapidly dwindling, how does MKO finance its programs?" asked Crescent International editor Zafar Bangash. "The Saudi regime funds them lavishly. The terrorists in turn pay tons of money to greedy and corrupt American officials and politicians. Not surprisingly it has become well known that America has the best democracy money can buy. We can add to this another truism: terrorism is an integral part of US foreign policy."

"Muslims should truly rejoice in the achievements of the Islamic Revolution and look forward to similar breakthroughs in the rest of the Muslim world," he added.

Not surprisingly, Crescent International dubs itself the "newsmagazine of the Islamic movement."

The Tasnim News Agency describes its mission as "defending the Islamic Revolution against negative media propaganda campaign and providing our readers with realities on the ground about Iran and Islam, specially [sic] current wave of the Islamic Awakening in the region...."

Bangash has appeared on other Iranian media, including on the Islamic Republic's state-funded Press TV where in 2014 he hinted at a conspiracy by "imperialist and Zionist forces in conjunction with the Saudi Wahhabis in order to undermine the reemergence of Islamic civilization in the world." He also featured in a short video published last year by Islamic Pulse based out of the Iranian holy city of Qom, where he explained why the "Iranian Revolution" is in reality an "Islamic Revolution" and has relevance to the entire Islamic world.

Crescent International is managed by the Institute of Contemporary Islamic Thought (ICIT). ICIT promotes the works and ideas of Kalim Siddiqui, an Iranian revolutionary ideologue who died in 1996. While living in England, Siddiqui promoted Ayatollah Khomeini's fatwa calling for writer Salman Rushdie's murder for publishing The Satanic Verses. It was not just a religious decree, Siddiqui said, but "an order that must be carried out as and when it becomes possible to do so."

Bangash serves as the ICIT's director.

Other pro-Iran propagandists affiliated with the ICIT include Imam Muhammad al-Asi and Afeef Khan. Al-Asi and Khan are also part of Crescent International's editorial team.

Al-Asi, a former imam at the Islamic Center of Washington, has called the Trump administration "the poodles of Zionism on Capitol Hill." During a sermon at June's Al-Quds Day, an annual Iranian regime led celebration to "liberate" Jerusalem, al-Asi advocated the use of force to "dislodge" the "Zionist colonialist force in the Holy Land."

Al-Asi routinely makes appearances on Iranian television. The Islamic Center of Washington expelled him in 1983 after an alleged falling out with the Saudi Embassy over a "cache of arms" found on the mosque premises. Al-Asi now gives his sermons on the sidewalk opposite the mosque.

Al-Asi spoke at the May 2016 International Conference on Solidarity with Aqsa [Jerusalem] held in Tehran. Attendees included Iran's judiciary chief Ayatollah Saed Amoli Larojani and Zahra Mostafavi, who is the daughter of Islamic Republic's founder Ayatollah Khomeini and the secretary general of the International Union of NGOs to support the rights of Palestinians. Investigative Project on Terrorism founder and Executive Director Steven Emerson featured al-Asi in the 1994 documentary "Jihad in America." Al-Asi was shown urging Muslims to take up arms against non-Muslims at a 1990 conference. "We should be creating another war front for the Americans in the Muslim world," al-Asi said. "Strike against American interests."

Khan, meanwhile, argues that Zionists set up Muslims in the 9/11 attacks.

"...we can say with 100 percent confidence that Muslims had nothing to do with 9/11 even if there were certain patsies with Muslim names involved in the event," he said at a 2014 program marking the 13th anniversary of the attacks. "And those who had everything to do with the planning and the execution and the fallout of that event we are 100 percent confident in assigning blame to the Zionists, to the Israelis, to the imperialists and the colonialists in the world today."

Crescent International's latest issue features an article by 9/11 Truther Kevin Barrett accusing the Trump administration of "playing the Islamophobia card and pandering to ordinary Americans" by imposing the "Muslim ban." The "Muslim ban" alludes to President Trump's travel ban legislation proposed soon after he assumed office that banned entry into the U.S. of people from several Muslim majority countries.

Americans "were brainwashed by 9/11 propaganda, 'the most successful and most perverse publicity stunt in the history of public relations' according to National Medal of Science winner Lynn Margulis," Barrett wrote. "Trump and [Chief Justice John] Roberts are leaders of the world's biggest terrorist group, the so-called US government. They and others like him—not the innocent people of nations victimized by American terrorism—would be the real targets of any real war on terror."

An editorial in the same issue alleges that Israel's new nation-state law that reinforces the country's Jewish character "confirms Israel as an apartheid state, even worse than what existed in South Africa prior to its abolition in 1994." Also embedded in the editorial is a cartoon that shows Israel represented as a show performer throwing knives at a picture of a bleeding woman symbolizing Gaza. The cartoon caption reads: "The horror show called Israel..."

In the magazine's Special Reports section, Eric Walberg compares Israel with the Islamic State and Hamas. "Long-term strategy is what motivates both ISIS and the Zionists. All's fair in love and war, so torturing and killing civilians is the order of the day. It is all about land, so both are aggressively expansionist...The ISIS fantasy is the same as the Zionist 'foreign policy.' Just replace Jew with Muslim (that is, Wahhabi/Salafi). At least the Zionists aren't picky about who they call a Jew," Walberg wrote.

Another article derides the United States for giving up its past bravado talk about "defeating the Taliban" and offering to enter into peace talks with the group. It also claims the United States pressured Saudi Arabia to issue a fatwa (religious ruling) against jihad in order "to make Muslims fight among themselves to cause confusion and shed their blood." "The Taliban should be extremely wary of taking any American promises at face value. As the saying goes, when supping with the devil, use a long spoon. The Taliban would need a very long spoon indeed."

Crescent International's inflammatory rhetoric is not new. The magazine and its leaders and its sponsoring institution, the ICIT, have a long history of advocacy for Iran's regime, engaging in America and Israel bashing and promoting pro-terrorist apologia. As the Iranian economy teeters on the brink of collapse from crippling sanctions, and anti-government protests gain traction across the country, the Islamic Republic continues peddling pro-regime propaganda through its North American supporters in a desperate bid to stay afloat.