"This might be the biggest boycott, divestment and sanctions win – ever. Congratulations to all the activists around the world who made this happen!" the anti-Israel group Jewish Voice for Peace (JVP) posted on Facebook.

Even Hamas, a designated terrorist organization, thanked Argentina for cancelling the friendly soccer match via twitter.

But other reports dispel the BDS narrative, exposing an ugly truth. The match was scrapped due to death threats targeting Argentina's star player Lionel Messi. Argentina's foreign minister described the threats as "worse than ISIS," the Washington Post reported. 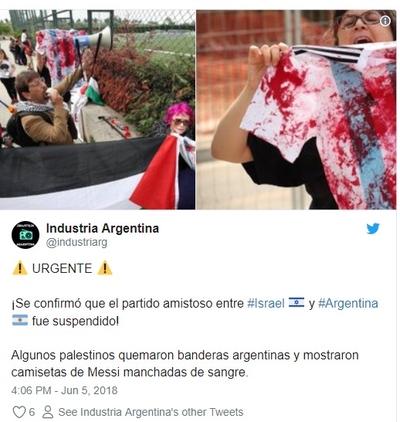 Palestinian Football Association chief Jibril Rajoub led a campaign against Messi specifically, inciting those to "burn his picture and his shirt and to abandon him," if he played in Israel.

"A small group of youths wearing Palestine soccer scarves demonstrated outside the [Argentine] representation office [in Ramallah] and attempted to set fire to an Argentinian flag," Reuters reported.

But the intimidation and the extortion tactics used should not be touted as a win for BDS activists.

"The cancellation of a friendly match in Jerusalem with Argentina's national soccer team was not the result of pressure applied by Israel boycott activists, but was rather a capitulation to terrorism," said Israeli Culture and Sports Minister Miri Regev.

It's a form of diplomatic terrorism, former Israeli ambassador to the United Nations Ron Prosor argued. The BDS activists "tr[ied] to create a change in the political, public, and civil attitude towards Israel. It's not about a legitimate political debate – it's about undermining Israel's legitimacy," Prosor wrote.