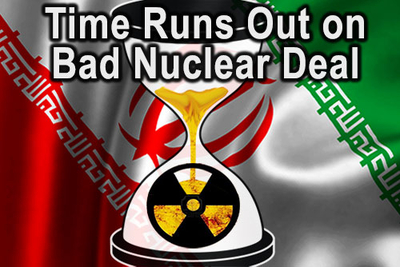 As the threat of open warfare between Iran and Israel escalates, experts and world leaders are divided on what President Trump's decision to exit from the nuclear deal means in practical terms.

Trump has long criticized the 2015 deal limiting Iranian nuclear activity in exchange for sanctions relief, calling it "insane," "ridiculous" and something that "should have never, ever been made."

The agreement, formally known as the Joint Comprehensive Plan of Action (JCPOA), was negotiated by the Obama administration, and accepted by Iran and the five permanent UN Security Council members – China, Russia, France, United Kingdom, United States – plus Germany and the European Union.

While Trump's decision to leave the JCPOA has renewed debate about the deal's shortcomings and broader concerns about Iran, Israeli defense officials warned on Sunday that Iran may have its proxies fire missiles at military targets in northern Israel. A top Iranian official blamed Israel for last month's missile barrage on the T-4 Air Base near Palmyra in central Syria and threatened to respond. Iran's threats appear to go beyond words: in the last week Syrian rebels in southern Syria arrested a suspected Hizballah member who said he was awaiting orders to fire rockets at Israel.

Israel has threatened to attack all Iranian bases in Syria in retaliation for an Iranian strike and even to kill Syrian President Basher Assad for allowing Iran to target Israel from his territory. Hours after Trump announced his decision to exit the Iran nuclear deal, the IDF reported "abnormal" activities by Iranian forces in Syria and conducted an airstrike on a suspected Iranian military base south of Damascus, which reportedly killed 15 pro-Syrian-regime forces, including eight Iranians.

But an open Iran-Israel war is unlikely, said Tel-Aviv University Professor Uzi Rabi, who thinks that "both sides will opt for a partial conflict and strive to reach a middle way, not a full-blown war ... At this point it is a psychological war – we hope it stays in this format, as a bunch of twisted perceptions will lead to a real war. The Iranians have a lot to lose, financially (they are stretched to the limit) as well as politically at home. Israel needs to keep this detained as well, and to keep the US on its side to go against Iran."

Russia's presence in Syria also complicates Israel's options. "Every action with a strategic implication must be coordinated with Russia," Rabi noted.

There is an increased "likelihood of an Israeli attack on the Iranian nuclear infrastructure," Middle East Forum President Daniel Pipes told the Investigative Project on Terrorism. That is because of Trump's decision to leave the JCPOA, "plus the direct confrontation of Israel and Iran in Syria."

The consequences of the U.S. decision depend on which side is perceived as having breached the agreement, said Meir Litvak, a Tel Aviv University professor of Middle Eastern and African History. "My fear is that the US will be isolated, not Iran, unless Trump is able to build an international coalition. So far, he hasn't moved in this direction," Litvak said in an email.

The JCPOA required Iran to "address past and present issues of concern relating to its nuclear program," for the International Atomic Energy Agency to certify Iran's compliance. "Had the IAEA known then what it will see for itself when its experts study the material Israel obtained and is making available to the agency, the deal might have never gone into effect," Ahren wrote.

Netanyahu's televised presentation of Iran's secret nuclear file may have highlighted a second Iranian breach of the JCPOA by keeping computer models which could be helpful in developing future nuclear weapons.

Rabi thinks that Netanyahu's revelations about Iran's nuclear file provided legitimacy to Trump's decision to leave the agreement. "It shows the world that the agreement was not signed in good faith by the Iranians," he said. He notes that there was also a powerful psychological impact: "Israel showed the Iranian people as well as the regime that it has a hidden hand within Iran."

But only the United States saw the revelations as violations worthy of ending the JCPOA instead of pursuing tougher supervision, Litvak said. "Trump's chances to convince Europe to follow him are nil. Europeans believe that any deal is better than no deal. At best, we can hope that Europe will agree to increase pressure on Iran to improve the deal."

Pipes is not optimistic: "Fans of the JCPOA will ignore almost any evidence of Iranian misbehavior, so this will not reach them."

"Iran will suffer," by the U.S. withdrawal, "but it may be able to contain the damage if Russian, Chinese, East-Asian countries and companies will continue to trade with it," Litvak said.... With oil prices going up, it will be difficult for the US to impose [an] oil embargo on Iran."

On the other hand, Iran's economy is already on the ropes, as Fortune magazine noted during December's opposition protests. Thus, sanctions by the U.S. alone might be enough to threaten the Iranian regime. The unrest has continued even before Trump's announcement. Iran was hit recently with labor strikes and worker protests over inflation and unpaid wages. Such problems have frustrated ordinary Iranians even more, given their expectation that the lifting of sanctions, thanks to the Iran deal, would improve economic conditions.

Pipes doesn't expect Europe, which stands to lose about $20 billion if it resumes pre-deal sanctions, to help bring Iran to heel: "They will stay in no matter what: trade is trade."

Indeed, the EU partners in the JCPOA announced Wednesday that they intend to uphold the deal despite the U.S. withdrawal.

Thus, Iran is more likely to gauge European reaction before an immediate dive back into enrichment activities, said Tel Aviv University Contemporary Middle Eastern History Chair Eyal Zisser. "Only if everything falls apart, then they will consider becoming nuclear."

Iranian President Hassan Rouhani appears to be pursuing this precise strategy of dividing the deal's other signatories. He offered Monday to keep Iran in the deal even if the United States pulls out, provided the EU guarantees that Iran would continue benefiting from the accord in terms of Iran's trade with Europe.

Noah Beck is the author of The Last Israelis, an apocalyptic novel about Iranian nukes and other geostrategic issues in the Middle East.