Iran's New Interest in Nuclear Talks is Nothing to Celebrate 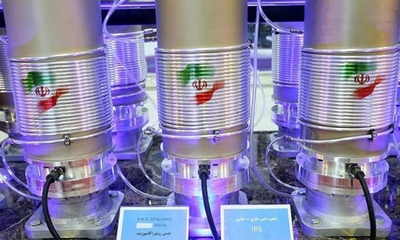 Iran is signaling its willingness to return to talks with the P5+1 countries (the United States, China, France, Russia, the United Kingdom, plus Germany) over reviving the 2015 nuclear agreement.

In light of Iran's large-scale progress on its nuclear program since 2018, as well as the proposed deal's short-term sunset clauses, and Tehran's regional malign activities, reviving the Joint Comprehensive Plan of Action (JCPOA) at this point seems like an option that will carry far more costs than benefits. Proponents of the deal say it would place a cap on Iran's nuclear activities and roll back to some degree Iran's recent advances. But the deal's short-term sunset clauses pave the path for Iran to resume its nuclear activities in the near future, with the expiration date of the sunset clauses looming far closer than they did when the original deal was signed in 2015.

It is easy to see why a return to the deal could set the region on a collision course to conflict, in which a resurgent Iran on the nuclear threshold destabilizes the entire region and beyond.

The most important sunset clauses of the JCPOA involve the production of Iranian advanced centrifuges, the amount of enriched uranium that can be at Iran's disposal, and the uranium enrichment levels. All of those clauses expire between 2025 and 2031. This means that the agreement would, within a few short years, provide international legitimacy for the Islamic Republic to become a nuclear threshold state.

In recent years, only two courses of action appear effective in delaying Iran's nuclear progress. The first is the reported series of sabotage attacks, attributed by international media reports, to Israel. Reported examples include the dramatic April explosion at the Natanz uranium enrichment facility, which according to some assessments took out around half of Iran's actively enriched centrifuges.

The second is the threat of military action if Iran crosses the red line.

Ultimately, all of these measures have been temporary attempts to roll back the countdown clock to Iran's nuclear breakout. Meanwhile, a second theoretical clock, which counts back the time left until the fall of the Iranian regime, is shrouded in mystery, its dials invisible. Those who hope that the radical Iranian regime collapses before it can build nuclear weapons have no indication of how long the Islamic Republic will exist.

In January, IDF Chief of Staff Lt. Gen. Aviv Kochavi took the unusual step of publicly stating his opposition to the prospect of a return to the deal. In a remarkable speech, Kochavi said that "return to the nuclear deal from 2015 or even a similar deal with a few improvements is bad and wrong. It is wrong operationally and strategically. Operationally, because it would again allow at its end, or before, the Iranians to enrich uranium, develop centrifuges, and a weapons capability [taking them up to] breakthrough. Strategically, it would present an intolerable threat to Israel and apparently spark a nuclear arms race in the Middle East. Hence, anything that resembles the current deal or an improved [version of that] agreement is wrong."

Raisi is the former head of Iran's judiciary and a notorious ultra-conservative judge, known as the "butcher of Tehran" for his role executing thousands of political prisoners in the late 1980s.

Raisi's cabinet looks just as one would expect. Former Quds Force commander Ahmed Vahidi has been appointed interior minister, and Mohsen Rezai, a former senior officer in the IRGC, is the new vice president of economic affairs. Both of them have been linked to the 1994 terrorist bombing of the Argentine Israelite Mutual Association (AMIA) in Buenos Aires, an attack that killed 85 people and injured hundreds. The attack was one of the worst pre-9/11 terrorist atrocities in the western hemisphere.

Raisi's "election" signals the completion of Iranian hard-liners' maneuvering to take over all three power centers in the country – the executive, legislature and judiciary. This does not bode well regarding Tehran's future intentions, and comes after a period of heightened Iranian aggression against civilian commercial ships at sea, including a deadly drone attack in July.

Iran's hard-line ideological camp is utterly committed to the goal of exporting the Islamic revolution to the world using terrorism, intimidation, and destabilizing actions. To this end, Iran invests enormous state resources into building a war machine, which includes a network of Iranian armed proxies. These infiltrate weak sovereignty zones, attack and destabilize moderate Middle Eastern states, and promote Iranian hegemony. Iran has also been seeking to set up terrorist sleeper cells all over the world.

Since former president Donald Trump unilaterally exited the nuclear deal in 2018 and placed crushing sanctions on Iran, the Islamic Republic, according to its own assessments, suffered $200 billion worth of economic damage. On the other hand, during those three years, Iran has been able to make significant progress on its nuclear program, edging closer to breakout status, and it has been systematically evading international inspections.

Iran continues to stonewall the UN's International Atomic Energy Agency over suspicious activities at four suspicious undeclared sites, according to a September report by the Institute for Science and International Security, co-written by former UN weapons inspector David Albright. Iran refuses to answer questions about the findings of nuclear material at three of those locations, the report said.

Gauging Iran's true nuclear progress is no easy task, but warning signals have been sounding loud and clear. Iran has been making alarming progress in its uranium enrichment efforts, and according to some assessments, is within a few weeks of being able to amass enough material for a single nuclear bomb.

It is still apparently some distance away from figuring out how to turn that uranium into uranium metal, and shape it into a fission core – an essential aspect of an atomic bomb.

Iran's progress in creating a nuclear explosive device – also an essential aspect of the bomb – is unclear. The 2020 assassination of its chief nuclear scientist, who headed a secret nuclear weapons project dubbed Amad, represents a blow to Iran's ability to turn enriched uranium into a bomb – but only a temporary one.

Iran must also figure out how to assemble the bomb as a nuclear warhead within its missiles. It has already developed an extensive array of missiles that have ranges of between 300 to over 2,000 kilometers (Israel is less than 1,800 kilometers from Iran). Some of these missiles could be converted by Iran from conventional to nuclear.

According to a recent estimate by Israeli Military Intelligence Directorate officers, Iran is roughly two years from having a fully operational nuclear weapon. However, the knowledge and infrastructure that it has already gained puts it close to the breakout category, and much of this progress cannot be rolled back.

"Under the present circumstances, any re-establishment of the JCPOA will be under a very dark cloud," the report co-written by Albright warned. The report is not the only one ringing the alarm bells over a return to the JCPOA, though so far, there are no signs that the international community or Washington is taking much heed.

Nevertheless, the talks could resume, and with them, the prospect of flooding the Iranian regime with tens of billions of dollars in sanctions relief, as well as tens of billions of dollars in Iranian economic growth. This would alleviate significant pressure that the Iranian regime has been feeling due to economic woes, which have led to a new wave of protests over the regime's failure to supply water and electricity to some of its regions.

But sanctions relief would enable Iran to boost funding for its region-wide war machine. This includes approximately $700 million a year worth of funding that Iran sends to its Lebanese proxy, Hizballah, the most heavily armed non-state terrorist actor on earth, and hundreds of millions of dollars for Hamas and Palestinian Islamic Jihad in Gaza.

Iran reportedly has spent $30 billion since 2011 propping up the murderous regime of Basher Assad in Syria. It also invests a fortune in its military entrenchment program in Syria, a program designed to set up missile bases and an army of militia factions with which to threaten Israel.

It also supports a network of armed proxy organizations in Iraq, and the Houthis in Yemen. The latter have launched no fewer than 240 drone and missile attacks on Saudi Arabia in 2021 alone. There is no reason to doubt that Iran would use new cash infusions to do anything other than deepen its regional hegemony program and threaten the security of both Israel and pragmatic Sunni states alike.

Should Iran go on to become a nuclear state, it can be expected to extend a nuclear umbrella over its terrorist proxies. This development would boost its deterrence against America's allies in the region, as they become encircled by increasingly confident and provocative Iranian proxies.

Additionally, a nuclear Iran would very likely set off a nuclear arms race in the Middle East, with those same Sunni states seeking to attain their own nuclear deterrent against the radical Shi'ite regime in Tehran.

Such a development would represent a drastic deterioration of regional security but also of international stability, which is why attempts to present Iran as a regional concern are highly misleading.

Currently, senior Israeli defense and government officials appear to be holding a series of marathon talks with their American counterparts in an effort to quietly share Israel's threat perception regarding the Iranian situation, and coordinate responses.

Such efforts may be receiving even quieter assistance from the Sunni Arab states who are badly threatened by Iran's capabilities and intentions.

According to one report by Walla News, the Israeli-American talks are aimed at setting up a parallel "Plan B," in case nuclear talks fail.

Israel's emphasis on strengthening intelligence and defense ties with its No. 1 ally ahead of critical developments on Iran make sound strategic sense.

Meanwhile, the Israeli military is accelerating strike capability preparations for Iran's nuclear program, and has requested billions of shekels in extra budgeting to help those preparations along.

"Iran's nuclear program has hit a watershed moment, and so has our tolerance," he said. "Words do not stop centrifuges from spinning. There are those in the world who seem to view Iran's pursuit of nuclear weapons as an inevitable reality, or they've just become tired of hearing about it. Israel doesn't have that privilege. We will not tire. We will not allow Iran to acquire a nuclear weapon."

Referring to the recent protests against the regime in Iran, Bennett added that "Iran is much weaker, much more vulnerable than it seems."

Last year, Israel fast-tracked the acquisition of a series of advanced weapons systems from the United States – weapons that could prove crucial in a confrontation with Iran, such as additional F-35 stealth fighter jets, new transport helicopters, and refuelers essential for long-range air operations.

Despite these preparations, the prospect of Israel having to face down Iran's nuclear program alone, without the assistance of the U.S., would represent a strategic failure with serious consequences – one that the ongoing high level discussions can hopefully avert.