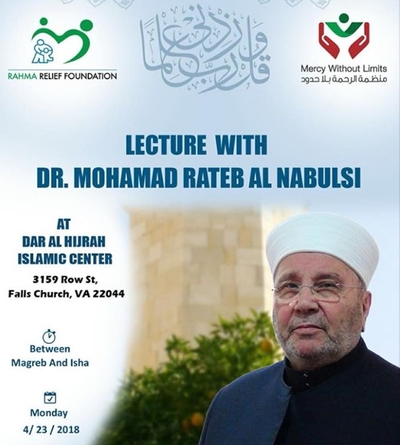 A Syrian imam who sanctioned Palestinian suicide bombings and who was banned from Denmark last year as a "hate preacher" is visiting several mosques in the Eastern United States.

"All the Jewish people are combatants" acceptable as targets for attacks in Israel, Sheikh Mohammed Rateb Nabulsi wrote in his 2001 "ruling on martyrdom operations in Palestine."

"They do not have a career that a military rank does not encounter: doctor, pilot, engineer, for example, is a tank commander. Every civilian, citizen," he wrote. "They do not have a regular army; they have a reserve army, and all the people can fight, so this is essentially an entirely aggressive entity from A to Z. This is the Sharia ruling."

He deleted this fatwa from his Arabic website in 2014 after the Investigative Project on Terrorism (IPT) first wrote about a U.S. visit on behalf of the Syrian American Council (SAC) and Shaam Relief. A cache of the original post remains available. SAC worked to cover up the fatwa for State Department officials.

Nabulsi, who endorsed the death penalty for homosexuals, also suggested in a 2010 post on his website that same-sex marriage was a reason for Muslims to wage violent jihad against the West.

His fundraising tour benefits the Rahma Relief Foundation and Mercy Without Limits, both charities that say they aim to help Syrian refugees.

Mercy Without Limits chairman and President Mohamad Albadawi also serves as a trustee of the Muslim American Society (MAS), which prosecutors say was founded as the "overt arm" of the Muslim Brotherhood in America. He was listed in 1997 as the registered agent of the Muslim Arab Youth Association (MAYA) and his Mercy Without Limits biography says he served as executive director. MAYA hosted Osama Bin Laden's mentor Abdullah Azzam in 1989 and Muslim Brotherhood ideologue Sheikh Yusuf Qaradawi in 1995. Albadawi spoke at MAYA's 1993 convention in Detroit.

Zuhdi Jasser, a Syrian-American and founder and president of the American Islamic Forum for Democracy, condemned the mosques for treating Nabulsi as mainstream.

"It is incumbent upon every American Muslim especially the Syrian community to marginalize and defeat the ideas of radical Islamism peddled by the likes of Nabulsi," Jasser said.