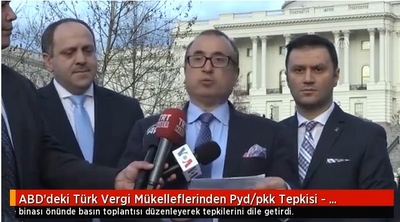 In a September 2016 speech to the group, Erdogan promised to help TASC, which he called an effective mechanism for uniting Turkish-American groups that lets them campaign on issues of common interest.

Last week's lobbying effort took place although none of the organizations registered with the Justice Department as agents of a foreign government under the Foreign Agents Registration Act (FARA). All who lobby on behalf of foreign governments or political parties are required to register under the act. It was organized by Murat Guzel, a Pennsylvania businessman who sits on the boards of MUSIAD USA and TASC, the Turkish news site Haberler.com reported.

Guzel complained about $550 million in SDF support that the Pentagon has requested from Congress at a Capitol Hill news conference covered by Turkish media outlets and by Voice of America.

"This money is being paid for with our taxes, and it is ironic that US intelligence organizations also describe this group as an extension of the PKK as a terrorist organization," Guzel said. "We have received very positive results especially from the talks that we had yesterday and today and we will increase our visits."

Turkey invaded Syria's predominately Kurdish Afrin region in January seeking to punish the YPG, which the Erdogan government views as an extension of the Kurdistan Workers Party (PKK). The PKK has waged a violent campaign for Kurdish autonomy in Turkey during the past 40 years and is designated as a terrorist organization by the State Department.

Turkish leaders including Erdogan have become increasingly militant in their rhetoric since the Afrin military campaign began, with some calling their invasion a "jihad." Even as its American branch lobbied Congress, Cihannuma's top leader in Turkey, Mustafa Sen, claimed that Turkey is at war with the United States in Syria,

Asserting they are part of a multi-ethnic group dedicated to fighting ISIS, Syrian Democratic Front officials distanced themselves from the PKK in January. State Department officials responded to Turkish complaints about the SDF that month, saying it "serves the cause of regional stability." The SDF redeployed 1,700 fighters in the past week who had been fighting ISIS to resisting the Turkish army and its jihadist allies in the Free Syrian Army around Afrin.

MUSAID USA President Mustafa Tuncer also criticized U.S. support for the SDF at the news conference, saying the SDF is made up of terrorists.

Last week's lobbying effort used talking points similar to those offered by Turkish officials in their dealings with the Trump administration since the invasion of Afrin.

"Washington is crawling with Turkish organizations whose true purpose seems to be to engage in lobbying on behalf of Erdogan's positions or obsessions of the day," American Enterprise Institute Turkey expert Michael Rubin told the Investigative Project on Terrorism (IPT). "There's two reasons for this: Turks figure that if they violate the law, they can just go home. But even if they get caught, the price is worth it because getting in President Erdogan's good graces can be very lucrative indeed.

"It's not just MUSIAD USA: There's at least a half dozen organizations and maybe twice that who have gone down the same rabbit hole."

Influence operations by MUSAID USA and TASC have gone on for the past few years.

Guzel and Tuncer wound up on the FBI's radar in 2016 on suspicion they were spying for Turkey, according to a leaked Sept. 8, 2016 email from MUSIAD USA Executive Director Ibrahim Uyar to Erdogan's son-in-law Berat Albayrak. It also noted that two FBI agents questioned Uyar, Guzel, Tuncer and two other men about MUSIAD and TASC.

Albayrak, who is Turkey's energy minister, is widely considered to be Erdogan's heir apparent. Media reports suggest that Albayrak personally profited from sales of ISIS oil.

"[The FBI agents] asked about MUSIAD and TASC. They are accusing me of trying to intervene in American politics on behalf of our President and making secret agents in the name of the Republic of Turkey. They have studied our work in the last two years and they have questions because of the report they received," Uyar wrote.

Other emails released by WikiLeaks disclose that Guzel had frequent communications with Albayrak about his work.

The leaked documents show that these groups likely are funded through a secret discretionary budget used by Erdogan and his prime minister, said exiled Turkish journalist Abdullah Bozkurt, who said he reviewed them in-depth. Businesspeople who finance these operations in return receive favorable government contracts in Turkey, Bozkurt said.

TASC and MUSIAD USA have courted U.S. Islamist groups, including the Council of American Islamic Relations (CAIR) and the United States Council of Muslim Organizations (USCMO).

"I am sending this earmarked to you to keep you informed. Your Ambassador is working to solve the problem. It will be better for us. Inshallah ... We will be able to give thanks to you. I will continue to fight for our cause in our country," Uyar wrote.

This wasn't the first time that TASC's activities allegedly had a link with Turkish intelligence operations in the U.S.

TASC organized an April 2015 demonstration in conjunction with U.S. Islamist groups to downplay the 1915 Armenian genocide that killed 1.5 million people. Turkish intelligence agents attended an earlier meeting where the demonstration was planned, Egypt's Al-Bawaba newspaper reported. Leaders of the pro-Muslim Brotherhood Egyptian Americans for Freedom and Justice (EAFJ) and an assistant to the Turkish Ambassador Serdar Kilic also attended, according to a Facebook post by EAFJ leader Mahmoud ElSharkawy. Al-Bawaba also described ElSharkawy as a member of the international Muslim Brotherhood. EAFJ itself has strong ties with the Egyptian Muslim Brotherhood.

ElSharkawy and EAFJ President Hani Elkadi, another attendee at the 2015 demonstration's planning meeting, became contacts for the march. They promoted a website called FactCheckArmenia.com on their Facebook pages. The Poynter Institute found that meeting attendee Ayhan Özmekik ran FactCheckArmenia.com. It also found that Özmekik had connections to Erdogan's son, Bilal. Özmekik's Facebook post about the planning meeting also noted that the organizers discussed how to get Egyptian Islamists in America to coordinate with the Turkish ambassador's assistant.

Due to the revelations in the leaked documents, it would be "judicial malpractice" for the Justice Department to not investigate these groups to determine if they acted as agents of a foreign power, Rubin told the IPT.

"There's also the danger of not doing so: If Turkey gets away with this, not only might the agents of Turkey become emboldened in the way they have in Europe, where they have been caught red-handed engaging in espionage and perhaps even in attacking dissidents, but it sends the signal to other countries that they can skirt US laws with abandon," Rubin said.