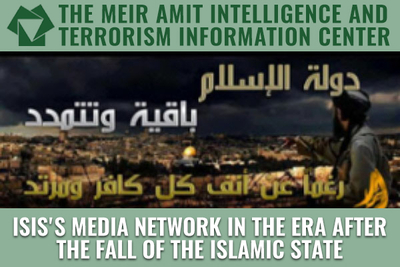 Since ISIS lost most of its territory in Syria and Iraq, the terrorist organization has faced other considerable setbacks. For example, it is desperately scrambling for new revenue sources – even trying to sell its own minted currency as memorabilia.

ISIS's media network has taken a big hit as well. With the demise of its "caliphate," there has been a noticeable and significant reduction in the quantity and quality of ISIS media production, a new study from the Meir Amit Intelligence and Terrorism Information Center finds.

At its height, ISIS used its media network to brag about its governance, encouraging others from around the world to join the "new Caliphate" and build a fundamentalist Islamic state. Now, ISIS primarily calls on its adherents to carry out terrorist attacks abroad and be patient while the group goes through a period of reconstruction.

But by the end of 2017, the ISIS media network showed some signs of revival. Most of its websites and media institutions are fully functioning again and the quality of its publications improved. These improvements are noticeable in Syria and Iraq, along with some of its key regional affiliates including in the Sinai Peninsula and the Afghanistan/Pakistan region.

The Meir Amit Center study finds that improved media production is generally associated with higher levels of ISIS activity and terrorist operations in those Islamic State provinces. Therefore, the quality and frequency of ISIS' media output can be seen as a proxy for the organization's durability.

Despite its territorial loses, ISIS remains a major threat to regional and international stability. Without a "state" to defend and manage, it can now focus on conducting terrorist attacks across the Middle East, its other regional affiliates, and in the West.

The study is based on primary research of various ISIS media outlets and other prominent research on the subject. It is divided into four parts exploring ISIS's media network at its organizational peak, features of its current media landscape, media activity within ISIS regional affiliates, and social network communications.