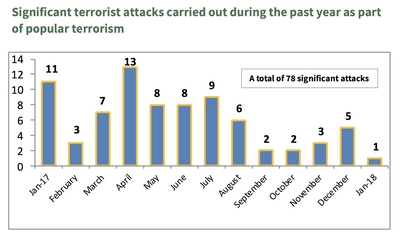 Palestinian President Mahmoud Abbas has issued another veiled, public call for violence and terrorism against Israelis.

The problem is that the Palestinian Authority (PA) does not actually advocate for "quiet protest" through "peaceful means," as Abbas claims. Abbas knew that the world would be watching his remarks at the latest PLO meeting, and decided to put up a more moderate face when describing Palestinian "resistance."

In reality, Abbas and the PA systematically promote violence and attacks against Israelis. The Palestinian leadership often uses the code word "popular resistance" in reference to individual terror initiatives – which has emerged as the norm in Palestinian terrorism recently.

During his Jan. 14 address, Abbas also seemed to have threatened U.S. President Donald Trump, saying: "May your house be destroyed."

On Tuesday, the United States announced that it would withhold roughly half the aid originally allocated for the United Nations Relief and Welfare Agency (UNRWA) – a UN agency dedicated solely to serve the Palestinians. UNRWA-run schools in the Palestinian territories feature textbooks that demonize Jews and encourage Palestinian youth to embrace suicide terrorism.

Palestinian figures are escalating their war of words with the U.S. administration, still enraged by the Trump administration's recognition of Jerusalem as Israel's capital. Palestinian leaders have been disappointed since President Trump warned Abbas to cease inciting violence and raised concerns over the PA's program of paying terrorists and their families.

According to statistics released by Israel's foreign ministry on Wednesday, Palestinians conducted 54 terrorist attacks in 2017. Another 400 attacks were foiled. The vast majority of terrorist attacks against Israelis in recent years are perpetrated by individuals, not organized groups. This phenomenon is largely motivated by the "PA's strategy of 'popular resistance' (i.e., popular terrorism) adopted by the PA and Fatah at the Sixth Fatah conference in August 2009."

Since that conference, 112 Israeli civilians have been killed by Palestinian terrorism fueled by PA and Fatah incitement.