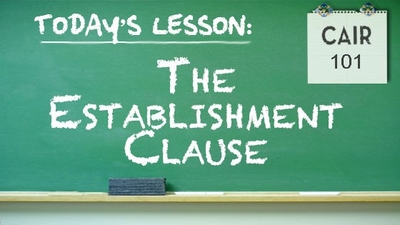 CAIR attorneys conducted a presentation for educators on Election Day, focusing on Islamophobia and the civil rights of Muslim students, a November press release said. The seminar was described as the first in a series of planned workshops on those issues.

"In the current political environment, Muslim American students are facing increased rates of bullying, emotional abuse, physical threats, and verbal epithets due to their faith, race, or ethnicity," CAIR Philadelphia said in the release.

Still, the director of the school system's Multilingual Family Support Center argued that, "We need CAIR helping our schools."

For a subsequent session, Fazlullah and Houldin would discuss "issues of diversity, equity, and fairness" at a January 3 professional development day, Colette Langston, principal at Philadelphia's Swenson Arts and Technology High School, wrote in an email to teachers. The morning seminar was called, "Cultural Sensitivity and Diversity Workshop #1 Topic: Islamophobia."

The school district did not provide course materials in response to the IPT's public records request. School district officials did not respond to queries as to whether they conduct sensitivity training for other religious groups including Christians, Jews, Sikhs, or Hindus.

The school district's reliance on CAIR could raise constitutional issues because the group's executive director has described CAIR as a religious ministry.

Nihad Awad, CAIR's executive director, testified before the National Labor Relations Board (NLRB) last spring that CAIR was a religious organization whose primary purpose is to spread Islam.

"[Awad] testified at length about the Employer's role in conducting educational services in the fields of religion, culture, education, society, and history concerning Islamic issues. These services are provided to both Muslims and non-Muslims alike. [Awad] described the Employer's role in explaining the Islamic faith itself," Charles L. Posner, regional director of the National Labor Relations Board, wrote in an April 7 ruling.

Awad's acknowledgement prompted the San Diego Unified School District (SDUSD) to publicly back away from a CAIR-sponsored anti-bullying program. The Freedom of Conscience Defense Fund (FCDF) was suing to bar CAIR from influencing public school programming.

San Diego's anti-bullying plan violated California law, along with students' 1st and 14th amendment rights because CAIR is a religious organization and because the program gave Muslim students special treatment, the lawsuit said.

Those arguments could apply equally to Philadelphia's public schools. "The San Diego case is far from over, so there is no doubt it could have precedential value in a legal challenge to Philadelphia schools' partnership with CAIR," FCDF Executive Director Daniel Piedra told the IPT.

School districts may not aid one religion, one religion over another, or religion over non-religion, an American Civil Liberties Union (ACLU) legal bulletin said. It cites the seminal 1972 U.S. Supreme Court case, Lemon v. Kurtzman.

In the San Diego case, FCDF argued that CAIR's definition of Islamophobia is too vague and that what it considers bullying could ensnare legitimate criticisms of Islamic practice. FCDF also asserted that the SDUSD's "anti-bullying" program unconstitutionally established Muslims "as a privileged group within the school community."

FCDF cited a 1993 statement by CAIR's national spokesman Ibrahim Hooper to The Minneapolis Star-Tribune as part of its complaint against SDUSD. Hooper told the paper he "wouldn't like to create the impression that I wouldn't like the government of the United States to be Islamic sometime in the future. ... I'm going to do it through education."

"We know that CAIR is committed to advancing its anti-Islamophobia initiative nationwide, so we are equally committed to making sure it dies in San Diego. Ideally, that would be done by a precedential court decision," Piedra said.

None of the school district records indicated that the program is being repeated this school year. The Philadelphia School District declined to comment whether the San Diego case would impact future decisions about working with CAIR.