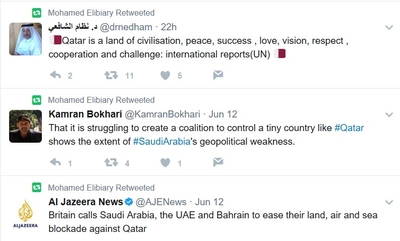 A former Homeland Security Advisory Council (HSAC) member with Muslim Brotherhood sympathies expressed support for Qatar this week, as the Gulf State finds itself increasingly isolated for its terror support.

Another retweet shows Gazans rallying in support of Qatar five days after Saudi Arabia and its allies announced a blockade. 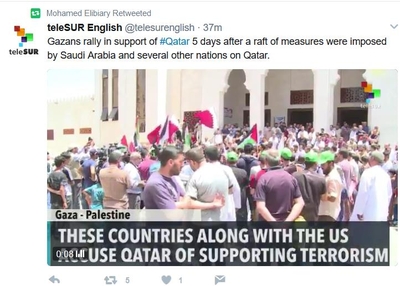 "People should not be surprised that many in West support Qatar & rightly see the coordinated KSA-UAE-Trump blockade as unjust. #QatarCrisis," Elibiary said in a June 11 Facebook post. In May, Elibiary insinuated that Egypt's Coptic Christians had it coming when ISIS attacked them.

"Reading ISIS's latest mag 'otherizing' Egypt's Copts. Subhanallah how what goes around comes around. Coptic ldrs did same to MB Egyptians," Elibiary tweeted on May 7.

Elibiary served on the DHS advisory council until early 2014. He whipped up a firestorm with tweets suggesting that the restoration of the Caliphate was inevitable after ISIS began its rampage across Iraq and Syria.

He also drew criticism in 2013 for describing America as an "Islamic country" with an "Islamically compliant constitution."

Elibiary has praised the late Muslim Brotherhood ideologue Sayyid Qutb, whose ideas have undergirded the modern jihadist movement – especially Qutb's call for violent jihad and for the purification of Islam from the forces of unbelief.

Researcher Patrick Poole reported in 2011 that Elibiary accessed confidential information from a Texas state database and shopped it to journalists in hopes of harming then Gov. Rick Perry. Rep. Louis Gohmert, R-Texas, confronted then Secretary of Homeland Security Janet Napolitano at a 2012 congressional hearing about Elibiary's actions. Napolitano deflected Gohmert's criticism suggesting he only cared because Elibiary was Muslim.