Admitting When You're Wrong

Editor's note: The IPT has chronicled an attempt by the Council on American-Islamic Relations (CAIR) to smear Senior Fellow Patrick Dunleavy. We've noted CAIR's inability to cite any specific statement Dunleavy has made in his teaching to justify this attack on him. Now, it seems, CAIR's guilt-by-association play has failed. 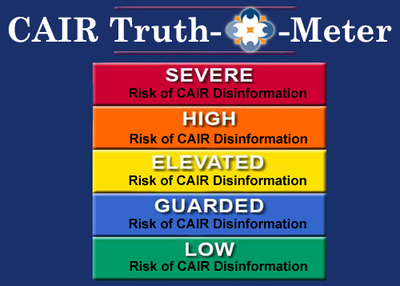 Everyone makes mistakes. Not everyone admits it. Plowing headlong into something you know is wrong is a sign of stubbornness. Directing false accusations and innuendos towards an individual is often a sign of vindictiveness.

Nowadays we've coined a phrase for it: "Fake News." Its purpose is to mislead. When directed at an individual its purpose is to slander. If you have ever been the victim of it, I can empathize with you.

Recently, the Council on American-Islamic Relations (CAIR) and another activist organization put out several press releases trying to end my work as a guest instructor for the United States military. I have spoken at the Army's Counter Terrorism Symposium and the Air Force's Special Operation School. CAIR called me names, accused me of prejudice and conduct unbecoming of, and detrimental to the goals of the United States military. Its exact words were, "...Mr. Dunleavy does not fit the U.S. military's standards..."

It demanded that I be removed from any position involving training of U.S. servicemen and women. It followed up the accusations with another press release 45 days later stating that, as a result of their public pressure on the USAF command, the Special Operations School Commandant was ordered to conduct a review of my class. "We welcome this review and hope it results in our military personnel receiving training based on balanced and accurate information, not on personal or political agendas," said CAIR-Florida Communications Director Wilfredo Ruiz.

If Mr. Ruiz spoke the truth, then he and the entire CAIR organization owe me an apology.

I have been informed that the review of my class material by a group of military officers, which included two commissioned officers who serve as Muslim chaplains in the United States Air Force, is complete. Their findings; Nothing in my course curriculum was found to be denigrating to Islam or Muslims.

I'm not holding my breath waiting for CAIR's apology.

I realized long ago when I started my career in law enforcement that when you enter public service you have to be ready to take some criticism. I remembered the words of Theodore Roosevelt: "It is not the critic who counts; not the man who points out how the strong man stumbles, or where the doer of deeds could have done them better. The credit belongs to the man who is actually in the arena, whose face is marred by dust and sweat and blood; who strives valiantly; who errs, who comes short again and again, because there is no effort without error and shortcoming."

Have I made mistakes or errors? Absolutely. But not when it comes to the subject matter I teach about. The Air Force review makes that clear.

I teach a class on Prison Radicalization and Homegrown Terrorism. It is based on my investigative experiences in the criminal justice system as an undercover agent infiltrating organized crime and other criminal enterprises. Part of my career involved working with the both the New York Police Department's Intelligence Division and the FBI. I don't teach theory. It is a practicum and it helps military and law enforcement personnel understand how a person can become radicalized.

Training is a necessary component in the war on terrorism. That doesn't just involve combat tactics but also understanding the enemy – how they operate and draw others to their fight. Islamic radicalization is a very real threat. It operates in society at large and in a particularly vulnerable segment of society, the prison environment.

We call prisons "correctional systems" because we hope in some way to rehabilitate offenders. Jihadists call them training grounds and universities. They have produced terrorists. The most recent examples are Khalid Massood, who killed four people, including a police officer, in London's Westminster area. Anis Amri killed 12 people in Berlin. Both were former inmates radicalized while incarcerated.

If we ignore the facts or attempt to silence those who speak about the subject, we become like the terrorists, refusing to hear anything that might challenge our own dogma.

Wars are fought in many places other than the battlefield. Wars are also fought in the arena of public opinion.

Honest debate is healthy, slanderous accusations are not.

Maybe CAIR learns a lesson from this episode. But again, I'm not holding my breath.