For Some, Sex Appeal is Part of Jihad's Lure 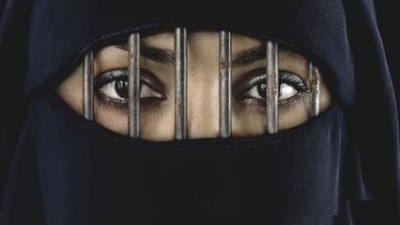 Earlier this month, the U.S. State Department issued a new travel warning for Americans, cautioning them about travel to Europe this summer. The extent of that warning was remarkable: not just a single country has been deemed dangerous, but an entire continent.

And with good reason: terror attacks are becoming more frequent Europe-wide, from Paris to Berlin, from Stockholm to Brussels.ISIS was quick to claim responsibility for last week's suicide bombing at an Ariana Grande concert in Manchester, England.

What's more, British intelligence recently warned that as many as 350 British nationals may soon return from Syria, where they have been fighting alongside ISIS, many of them prepared to continue their violent jihad at home. They'll have ample support: England's MI5 suspects there up to 3,000 "violent Islamic extremists" in Britain, according to the London Times.

Accordingly, civilians and military, police and politicians across the Western world prepare for the terrorism we have come to know, be it attacks in our own cities or the gruesome images of beheadings we've seen on the internet and TV – and even our streets.

But a newly released United Nations Security Council report exposes the one weapon for which the West is wholly unprepared, and it may be the most powerful: women.

According to the report, women captured and enslaved by ISIS, Boko Haram, and other Islamist terror groups are not only being raped: they are frequently forced to convert to Islam; used as revenue streams via, prostitution, sex trafficking or demands for ransom from their families; or "treated as the wages of war, being gifted as a form of in-kind compensation or payment to fighters who are then entitled to resell or exploit them as they wish." They are offered up as enticements in recruitment efforts, which often come with promises of wives or private sex slaves. And they are often forced to act as human shields or suicide bombers.

In short, women have become the ultimate terror tool, used to recruit new terrorists, create a new jihadist generation (through forced pregnancy), and to kill.

Sexual violence is not new in warfare. But Islamic terror groups have taken it to new and horrifying extremes, from the 2014 kidnapping of 276 girls forced into sex slavery by Boko Haram, to the ethnic cleansing of Yazidis by ISIS terrorists, who took thousands of Yazidi women and girls as their slaves.

But even more shocking, as Baku Center for Strategic Studies fellow Najiba Mustafayeva wrote in Modern Diplomacy, "social media has converted [this] brutality into a form of propaganda to incite, radicalize, and attack recruits."

And it has done this with particular success in Europe, where some 6,000 Muslim men and women have made the trip to Syria to join in the jihad and the formation of the Islamic State.

Put another way: young men raised in a European culture that decries violence against women, where the rape of young girls is viewed not just as criminal but pathological, are being seduced by the thousands to leave their homes and families by the hope of enslaving and raping women and young girls.

And Europe has only itself to blame.

Although these young men were raised in a secular, Western culture, many Muslim youth have never fully accepted it as their own. From the time immigrant workers, largely from Turkey, Morocco, and Algeria, first arrived in Europe in the 1960s, Europeans kept them at arms length. They were guest workers, not immigrants. They were not expected to do the things immigrants might be, like learning the local language. They formed their own communities, and over the years, brought their families to join them, or married women from their home villages – women who, like them, were largely uneducated, religiously conservative, and naïve about the values of the countries they now lived in. They often wore headscarves. Their marriages were arranged. They were expected, and expected themselves, to follow the rules and values they'd grown up with.

And Europe, still guilt-ridden over the religious persecution that became the Holocaust, simply looked away.

In fairness, most Europeans, even politicians, were as ignorant of the cultural and religious traditions of conservative Muslims as the Muslims had been of Europe's. But even as they came to understand the immigrants, the European officials stood awkwardly silent in the face of domestic battery, honor killings, and child marriages taking place in the Muslim communities.

Not that these things were rampant, or taking place in open view. But until the arrival of the Somali-born Ayaan Hirsi Ali, who in 2003 brought these issues public as a member of the Dutch parliament, even when they did happen, no one said a word. Even honor killings went ignored, registered as "suicides" or "accidents."

Nor had anyone previously observed, as Hirsi Ali did, that more than 60 percent of the women in domestic violence shelters in the Netherlands were Muslim, while Muslims accounted for just 6 percent of the population. Similar situations soon also emerged in other countries.

Laws since have changed. Immigration rules have tightened, and this, alongside a greater awareness of forced marriages, has made it more difficult to arrange so-called "import brides" – girls brought to Europe from a family's village of origin in an arranged marriage. France and Belgium have banned the burqa, that dehumanizing garment that not only underscores the notion of woman as sexual object, but removes her face, her human-ness.

But it has taken decades.

The young European Muslim men enticed by promises of a sex slave of their very own have grown up in this changing environment. Their mothers may have been import brides themselves, women raised in a world that does not recognize Western views of women's rights, and who similarly instilled those values in their sons – as did their husbands.

But the sons have a harder time now bringing girls like their mothers to Europe. And anyway, they know, treating women this way in Europe is against the law. Even if, as they believe, it's what they're entitled to.

Clearly, the pursuit of female slaves is not the only motivation for young men to join the Islamic State and other terror groups. Ideology, a belief in the creation of a pure Islamic culture, and the hope of martyrdom have all played a role. But for many young men, so, too, have the promises of (sex) slaves and life in a culture that reflects their own views of male and female roles.

And so they go to Syria. Or Libya. Or Iraq.

And they learn the art of terrorism.

Many of those men will be among the 350 who return to England, and the hundreds, if not thousands, of others whom European officials expect will also try to return home as the caliphate collapses. They will bring with them the sons who were born there, children of rape, of sex slaves, of mothers who have been traded away. The psychological impact of these backgrounds, coupled with their lives in a war zone and the indoctrination of ISIS training camps, is as unfathomable as it is unpredictable; but it does not bode well for the European communities that will become their new homes.

And what will happen to the women?

Nonetheless, there is some hope.

Education, the IMAGES authors maintain, can make a significant difference. "Men with higher education scored notably higher on the [gender equality] scale, and women even more so," they write. Consequently, they offer several recommendations for change within the region. Among them:

Some of these ideas are already in play in Norway. Other Western countries would be wise to follow suit, not just for the sake of Muslim women, but as a crucial weapon again Islamist terror now, and for the future.