Correction: De Standaard is a Belgian newspaper and Antwerp a Belgian city. The original version of this story misidentified both. 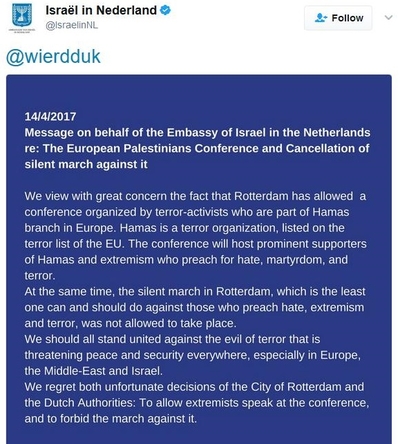 The Palestinian Return Center (PRC) – banned by Israel in 2010 for alleged Hamas ties – organized the "Palestinians in Europe" conference that attracted a few hundred people. In a statement released Friday ahead of the conference, Israel's embassy in the Netherlands voiced "great concern" over the event and identified the PRC as a Hamas front organization. Israeli embassies rarely issue comments or statements concerning similar events abroad.

The PRC conference featured speakers like Dyab Abou Jahjah, who has a history of anti-Israel and anti-Semitic statements. He was fired by the Belgian newspaper De Standaard earlier this year after praising a truck ramming in Jerusalem that killed four soldiers.

"I know there are officers of justice in the room, waiting to write down things. Let me tell you from now on: I have no problem supporting the Palestinian resistance against occupation by any means necessary," Jahjah said at the event on Saturday.

His call for violence against Israelis generated loud applause. In the past, Jahjah has referred to the Belgian city of Antwerp as the "international capital of the Zionist lobby."

Meanwhile, officials denied a petition to protest the conference by Christians for Israel – a move condemned by some Dutch politicians.

"It defies logic that people are free to preach for subjugation, whereas a peaceful group like Christians for Israel is banned from performing a silent protest," said Dutch politician Joel Voordewind in a statement on Friday.

The German government previously referred to the PRC as an affiliate of Hamas – a Muslim Brotherhood offshoot and designated terrorist organization according to several countries and the European Union.

"Hamas does not operate openly in Europe. Instead it uses, for instance, the Palestinian Return Center in London as a forum," the German Ministry of Interior said in a 2011 report.

Additional widespread support for Islamism was expressed in Rotterdam over the weekend.

After Turkish President Recep Tayyip Erdogan appeared to emerge as the victor in that country's historic constitutional referendum on Sunday, supporters approached the Turkish Consulate in Rotterdam to celebrate the Islamist leader's consolidation of power. An overwhelming majority (71 percent) of Dutch-Turks who participated in the referendum voted in favor of a stronger executive branch, which will accelerate Islamist encroachment throughout Turkey.