The new Palestinian curriculum for grades 1 to 4 "is significantly more radical than previous curricula," concludes a new study by Hebrew University's Institute for Monitoring Peace and Cultural Tolerance in School Education (IMPACT-se). It "teaches students to be martyrs, demonizes and denies the existence of Israel, and focuses on a 'return' to an exclusively Palestinian homeland."

In response to pressure from President Trump, Israel reportedly is preparing a series of concessions to Palestinians in a bid to re-launch peace talks. Trump may want to consider pressuring the Palestinians for parallel gestures, including correcting educational policies that are antithetical to peace.

Indeed, the IMPACT-se study warns that the "educational system has created a Palestinian nationalism that absolutely rejects the Other and is therefore incompatible with Israel's existence." Even more alarming, the report notes that the "Struggle against Israel and its disappearance is the main theme," and "The 1974 PLO's Phased Plan for the conquest of the Land of Israel/Palestine is taught. The curriculum reflects a strategy of violence and pressure in place of peaceful negotiations."

The "Palestinian school curricula are inspected by the international donors who finance the Palestinian Authority and, by extension, its public education system," the Times of Israel reported.

Islam is not used as a radical political tool in grades 1–4, but the educational message "includes biases towards non-Muslims," the IMPACT-se study says. And, in grades 11-12, "Religion is clearly abused...to foment hate amid calls for eternal war in the Levant."

The Palestinian curriculum of violence and hate highlighted by the IMPACT-se study is just one of the many ways in which Palestinian leaders have forced their violent agendas onto children.

Islamists have a particularly robust history of weaponizing children in their war against Israel. Last summer, a Gaza kindergarten graduation ceremony sponsored by Islamic Jihad, featured children dressed in military fatigues, holding toy weapons, acting out attacks on an Israeli army base, firing mortar shells, planting explosive devices, kidnapping soldiers, and even delivering mosque sermons that praise martyrdom. Absurdly, one of the senior Islamic Jihad members present at the event, which the terror group filmed in high definition and broadcast on YouTube, declares to spectators that the show was meant to spread a message of peace and love. "We are a life-loving people," affirms Hader Habib, a senior member of Islamic Jihad. "We honor and appreciate mankind...The message of Palestine's children today is a message of love to the whole world."

In 2012, senior Hamas commander Zaher Jabarin told Hamas' Al-Quds TV that Hamas labors "day and night" to educate Palestinian children in Gaza to become suicide bombers. In 2013, Gaza's Hamas-run al-Aqsa TV showed children singing the virtues of suicide attacks and wishing to blow themselves up to liberate Jerusalem and Palestine, according to a translation by the Middle East Media Research Institute (MEMRI). 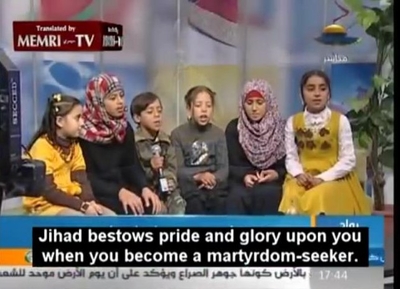 "Jihad bestows pride and glory upon you when you become a martyrdom-seeker," the elementary school-aged children sing. "Oh explosive device of glory – with her blood she created freedom."

Islamist abuse of Palestinian children extends beyond the educational context. Tens of millions of foreign aid dollars intended to benefit injured children "was instead taken by families of Hamas members who falsely registered their children in the program," the Times of Israel reported last August.

The use and abuse of children by Islamists also occurs outside of the Israeli-Palestinian conflict. The Islamic State uses child soldiers and brainwashes them to perform gruesome acts at an early age, including mock beheadings of dolls.

In 2015, Boko Haram, an Islamic extremist group based in Nigeria, sent 44 children on suicide missions in Nigeria, Cameroon, Chad, and Niger. The use of children as suicide bombers in Islamic countries is explored in greater depth by Lawrence A. Franklin, a former Defense Department Iran Desk officer.

But radical Islam isn't always the main factor in Palestinian terrorism committed by children. Last month, a report by Israel's Coordinator of Government Activities in the Territories (COGAT) found that children from troubled backgrounds were often ripe for radicalization because they viewed attacks as a way to commit suicide with glory. Child terrorists might be further motivated to die trying to kill Israelis because the Palestinian Authority often rewards such deaths by paying the bereaved families a monthly stipend.

According to COGAT, non-ideological reasons for lone-wolf attacks include "domestic violence within the household ... social criticism for an immoral act such as adultery, lack of respect for the family, matriculation failure and more; and serious psychological issues stemming from depression, despair, and mental illness."

Reforming the anti-Israel indoctrination of Palestinian children will not be easy. Palestinians reportedly responded with threats over reports that the United Nations Relief and Works Agency for Palestinian Refugees (UNRWA) is considering curricular changes that might curtail incitement.

Nevertheless, if world powers are serious about promoting a genuine Israeli-Palestinian peace, they must pressure Palestinian leaders to start preparing future generations for peace by replacing anti-Israel incitement and "martyrdom" adulation with messages of peaceful coexistence, including maps and history that acknowledge Jewish claims to Israel proper and territories in dispute.