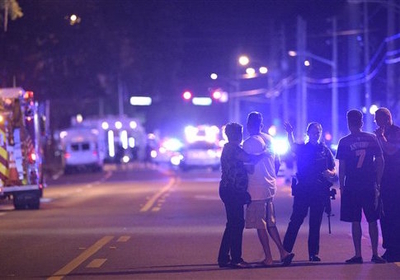 The domestic terrorist behind the Orlando nightclub massacre was motivated by a Pentagon drone strike in Iraq a month before the shooting, according to police transcripts made public last week.

Conversations between Omar Mateen and an Orlando police negotiator on June 12 were kept secret by FBI and local police until Friday. The secrecy contributed to misleading media accounts of the terrorist's motives in the days after the killings.

The transcripts were released by Orlando police Friday after a Florida court hearing held in response to a lawsuit filed by several news organizations.

Mateen killed 49 people during the attack on the Pulse, a gay nightclub, and wounded 53 others. Police eventually stormed the club and killed Mateen in a shootout after talks aimed at convincing him to surrender failed.

During an exchange in the early morning hours of June 12, an Orlando Police Department negotiator identified only as "Andy" asked Mateen, who was speaking by cell phone from inside the club, to tell him what was going on.

"Yo, the air strike that killed Abu Wahid a few weeks ago... that's what triggered it, okay?" said Mateen, who earlier in the conversation identified himself as a follower the Islamic State terror group.

"They should have not bombed and killed Abu Wahid," the former security guard declared. "Do your fucking homework and figure out who Abu Wahid is, okay?"

Additionally, Mateen praised one of the bombers of the 2013 Boston Marathon, Tamerlan Tsarnaev, and another domestic terrorist whose name was transcribed as unintelligible in the released transcript.

At other points, Mateen told the negotiator that the United States needed to stop all bombing in Iraq and Syria.

Initial reports from several news outlets reporting on the mass shooting variously described Mateen as gay, a "homophobe" and a "wife beater," despite his having made claims of allegiance to the Islamic State.

The New York Times, for example, stated in an editorial three days after the shooting that the "precise motive [of Mateen] remains unclear." The editorial then said it was "evident that Mr. Mateen was driven by hatred toward gays and lesbians." Investigators later dismissed as a false claim that Mateen was driven to the killing spree by gay self-hatred.

The Orlando attack was the deadliest terrorist incident since the September 11, 2001, attacks. The FBI would later reveal it investigated Mateen twice but claimed there was a lack of evidence he was linked to Islamic terrorism.

The Orlando attack came just over a month after the Pentagon announced on May 9 that a U.S.-led coalition air strike killed Abu Wahib, a middle-level Islamic State military leader in charge of Iraq's Anbar province on May 6.

Wahib was blown up along with three other jihadists in a drone strike on the car they men were riding in. The terror leader had been a high profile figure who appeared in several gruesome execution videos.

A defense official said the raid that killed Wahib employed a missile-firing unmanned aerial vehicle against the terrorist's car. The fact that a drone was used in the attack also may explain the government's reluctance to release the transcript.

The secrecy surrounding the transcripts of Mateen's comments appears based on Obama administration fears that publicizing the jihadist's statements would fuel further attacks.

The administration has sought to play down domestic ISIS-inspired terror attacks as disconnected from the Islamic ideology. The number of ISIS-linked attacks has increased over the past year.

FBI and Orlando police spokesmen declined to comment when asked why the full transcript was not made public earlier.

Heather Fagan, deputy chief of staff in the Orlando mayor's office, said the transcripts were withheld by the FBI during the Joint Terrorism Task Force investigation and released last week.

"The Department of Justice and the FBI recently advised the city of the FBI's determination that the 911 calls no longer need to be protected as their release would not compromise the ongoing investigation into the Pulse nightclub massacre," she told the Free Beacon.

The FBI and Justice Department released a partial transcript of the calls June 20—eight days after the attack. But those transcripts made no reference to the Iraqi airstrike that killed Wahid, or the Boston Marathon bomber.

Rep. Mike Pompeo (R., Kan.), a member of the House Permanent Select Committee on Intelligence, said during his first call with the crisis negotiator, Mateen explicitly stated U.S. involvement in Syria and Iraq motivated the attack.

"This fact differs dramatically and widely from the initial media and police reports," he said. "It is important for us to understand why that was the case. If officials intentionally sought to downplay the threat from radical Islamic terrorism, that would not only be wrong, but would also be a disservice to the American public."

Counterterrorism experts questioned the FBI's failure to release the full transcript sooner and suggested it is part of U.S. government efforts to obscure the nature of the domestic terror threat.

"Omar Mateen isn't a random individual discontented from a broader conspiracy," Gorka said, noting the terrorist's claim of allegiance to the Islamic State ties him to a broader global jihadist movement.

Also, Mateen's references in the transcript to the Islamic observance of Ramadan and fasting the day of the attack "flies in the face of the administration's argument that these attacks are wholly disconnected from Islam," added Gorka, a professor of strategy and irregular warfare at the Institute of World Politics.

"Justifying the attack as a response to our targeting of Abu Wahib, the ISIS head of the Al Anbar Lions, reemphasizes to reality that this is a borderless war in which the individual neutralization of high value targets will not bring us ultimate victory," Gorka said. "Only the delegitimization of the ideology that men like Mateen adhere to can do that."

"It is very disappointing that information like this is consistently withheld," Hoekstra said. "It's a pattern that is deeply troubling and calls into question the FBI's whole strategy of keeping America safer by hiding information."

Said Andrew McCarthy, a former federal prosecutor who handled terrorism cases: "The catalyst for all jihadist terrorism is Islamic supremacist ideology and its agenda to impose sharia."

"We remain willfully blind to this ideology, so we are increasingly vulnerable to attacks," McCarthy added. "And by failing to expose and discredit the ideology, we fail both our security and our pro-Western Muslim allies at home and abroad."

The transcript also reveals that Mateen used deception in his calls to police in an apparent effort to prevent SWAT teams from conducting a raid against his location. Mateen falsely told the negotiator that he had planted car bombs around Orlando and was preparing to outfit four explosive vests on hostages, which he described as similar to the suicide bomb vests worn by Islamic terrorists in the November 2015 mass shootings in Paris.

During the initial conversation, Mateen was asked his name and told the negotiator, "My name is I pledge of allegiance to (unidentifiable name) of the Islamic State."

The FBI statement said the 911 calls made by Mateen would not be released "out of respect for the victims" of the mass shooting. It stated that Mateen wanted the United States to stop bombing in Iraq and Syria. The FBI said Mateen told police, "I'm in Orlando and I did the shootings" and that he pledged allegiance to ISIS leader Abu Bakr al Baghdadi.

A joint Justice Department-FBI statement issued June 20 included a partial release of the Mateen calls but did not disclose the details made public on Friday.

"The purpose of releasing the partial transcript of the shooter's interaction with 911 operators was to provide transparency, while remaining sensitive to the interests of the surviving victims, their families, and the integrity of the ongoing investigation," the statement said.

"We also did not want to provide the killer or terrorist organizations with a publicity platform for hateful propaganda."

The statement went on to say that unreleased portions of the transcript that named the terrorist organizations and leaders "have caused an unnecessary distraction from the hard work that the FBI and our law enforcement partners have been doing to investigate this heinous crime."

"As much of this information had been previously reported, we have re-issued the complete transcript to include these references in order to provide the highest level of transparency possible under the circumstances."

The statement was referring to the first 911 call made by Mateen. The detailed calls to the police negotiator were withheld from release.

Police in Orlando released a number of 911 calls from victims in and around the club during the attack, but are withholding 230 calls made by victims to 911 emergency dispatchers under a law that allows keeping audio and transcripts secret when the calls involve a person being killed.