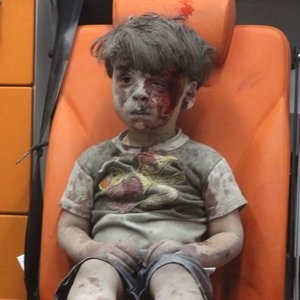 Syria's civil war claimed 470,000 lives since it started in March 2011, the Syrian Centre for Policy Research announced in February. That's an average of about 262 deaths per day and 7,860 per month. The carnage has continued unabated, so, applying the same death rate nearly 200 days after the February estimate, the death toll is over 520,000.

Such numbers are staggering, even by Middle East standards. However, the violence has become so routine that it only occasionally captures global attention, usually when a particularly poignant moment of human suffering is documented. The most recent example is Omran Daqneesh, a 5-year old Syrian boy who was filmed shell-shocked, bloody, and covered in dust after the airstrike bombing of his Aleppo apartment block.

The tragic image of Omran caused outrage around the world, as did the image of Aylan Kurdi, the drowned Syrian boy whose body washed up last September on a beach in Turkey. Yet Omran's plight demonstrates that, nearly a year after the last child victim of Syrian horrors captured global sympathy, nothing has changed.

If anything, the violence in this multi-party proxy war seems to be getting worse. Since Aylan Kurdi's drowning, Russia began blitz-bombing Syria in support of the Assad regime. The Syrian Observatory for Human Rights (SOHR) estimates that nine months of Russian airstrikes have killed 3,089 civilians – a toll that is greater, by some estimates, than the number of civilians killed by ISIS. By contrast, Syrian civilian deaths caused by U.S. airstrikes are probably in the hundreds (over roughly twice as much time, since U.S. airstrikes began in the summer of 2015).

But Syrian airstrikes are responsible for the bulk of civilian deaths in Syria. The Assad regime killed 109,347 civilians between March 2011 and July 2014 (88 percent of the total casualties at the time), according to estimates by the Syrian Network for Human Rights. That works out to about 91 civilian deaths per day. More recently, the SOHR documented 9,307 civilian deaths from 35,775 regime airstrikes over a 20-month period running from November 2014 through June 2016. Thus, roughly one innocent Syrian was killed every hour, during the 20 months that the SOHR documented civilian casualties caused by Russian and Syrian airstrikes.

Compare those figures to the number of innocent Palestinians killed by Israel from 2011 to 2014. According to Human Rights Watch (HRW), which has been accused of anti-Israel bias, 37 Palestinians were killed in 2011, 103 in 2012, 15 in 2013 and 1,500 in 2014 – the year when Hamas fired rockets at Israel from highly populated Gazan areas. That's a four-year total of 1,655. During roughly the same four-year period, the number of Syrian civilian deaths was about 76 times greater than the HRW total of Palestinian civilian casualties.

Yet the European Union singles out Israel for conflict-related consumer labels without any similar attempt to warn European consumers about goods or services whose consumption in any way helps the economies of countries responsible for the Syrian bloodshed, including Syria, Russia, and Iran. Human rights lawyer Arsen Ostrovsky has http://www.huffingtonpost.ca/arsen-ostrovsky/israel-apartheid-week_b_1304686.htmlwww.huffingtonpost.ca/arsen-ostrovsky/israel-apartheid-week_b_1304686.html how none of those countries is targeted by those advocating a boycott of Israel out of a purported concern for human rights. Even more absurd, most of the results produced by a Google search for "academic boycott of Syria" or "academic boycott of Iran" concern academic boycotts of Israel. That asymmetry precisely captures the problem.

In addition to supporting the Assad regime in Syria and contributing to the violence there, Iran executes people for everything from drug offenses to being gay.

Indeed, the global outcry over Syrian suffering is embarrassingly weak when compared to reactions to Israel's far less bloody conflict with the Palestinians. Imagine if Omran Daqneesh had been a Palestinian boy hurt by an Israeli airstrike on Gaza. College campus protests, the media, NGOs, and world bodies around the planet would be positively on fire. Israeli embassies would be attacked, French synagogues would be firebombed (eight were attacked in just one week during Israel's 2014 war with Gaza), Jews around the world would be attacked, and condemnations would pour in from the EU, the United Nations, and the Obama administration. UN resolutions and emergency sessions would condemn the incident. International investigations would be demanded. Global blame would deluge Israel, regardless of whether Hamas, a terrorist organization, actually started the fighting or used human shields to maximize civilian deaths. Israel would be obsessively demonized despite any risky and unprecedented measures the Israeli military might have taken to minimize civilian casualties.

Moreover, when an occasional Syrian victim captures global attention, the protests are generally for some vague demand for "peace" in Syria, rather than blaming and demanding the punishment of Syria, Iran, and Russia, even though those regimes are clearly responsible for the slaughter. The starkly different reactions to Israel and Syria are even more shocking when it comes to the United Nations.

From its 2006 inception through August 2015, 62 United Nations Human Rights Council resolutions condemned Israel, compared to just 17 for Syria, five for Iran, and zero for Russia, according to the watchdog group UN Watch. The lopsided focus on Israel is equally appalling at the UN General Assembly, as UN Watch has highlighted. In each of the last four years, as the Syrian bloodbath claimed hundreds of thousands of lives, there were at least five times as many resolutions condemning Israel as those rebuking the rest of the world:

A corollary of the anti-Israel bias ensures that no Israeli victim will ever enjoy the kind of global sympathy expressed for Omran Daqneesh or Aylan Kurdi. When a Palestinian man enters the bedroom of a 13-year old girl and stabs her to death in her sleep, Obama says nothing even though she was a U.S. citizen and the world hardly notices. By contrast, imagine if the Israeli father of Hallel Yaffa Ariel had decided to take revenge by entering a nearby Palestinian home to stab a 13-year old Palestinian girl to death in her sleep. The global anger would be deafening.

Why do Israeli lives matter so much less? And why do student activists, the UN, the EU, the media, and the rest of the world focus so much more on alleged Palestinian civilian deaths than on Syrian civilian deaths? Doing so is woefully unjust to Syrians. It is also deeply unfair to Israel, which has endured terrorist attacks on its people throughout its existence as a state. It is the one country that, according to Col. Richard Kemp, former commander of British forces in Afghanistan, has done more to protect civilians during war than any other in the history of war.

The global obsession with condemning Israel not only defames a beleaguered democracy doing its best, it also enables the truly evil actors like the Assad regime and Hamas, by giving them a pass on some of the world's worst crimes.

Please note, that clear evidence link the boy with individuals linked to Sunni Islamist Takfiris. One individual was seen with Sunni Islamic terrorists who recently beheaded a Palestinian boy in Syria. Therefore, the boy is nothing more than a victim of pro-Sunni Islamist propaganda.

Also, even individuals like Dr. Rand Paul note that Christians are not being slaughtered by the Syrian government side - on the contrary, Christians in many parts of Syria support the government and this applies to religious leaders.