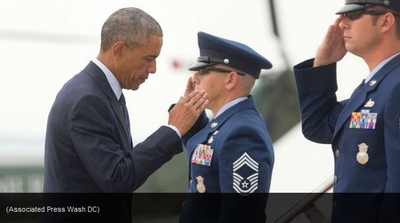 U.S. leaders have developed a disgraceful habit of casting aside those who serve their country with honor and dignity – as well as those from other countries who worked as foreign assets – when they no longer find them useful.

Portugal will soon extradite former CIA officer Sabrina de Sousa to Italy for incarceration. Her crime? She executed the orders of her CIA superiors, who were acting under the direction of the administration with oversight from Congress.

A dual citizen of the United States and Portugal, an Italian court convicted her in absentia in 2009 for her alleged role in the kidnapping of radical Egyptian imam Hassan Mustafa Osama Nasr in Milan. De Sousa says that she was nearly 200 miles away from the incident when it occurred.

Even Nasr, whom the CIA rendered to Egypt where he claimed he was tortured, said de Sousa is a scapegoat.

De Sousa followed a command issued by her agency and her country. If the Italians truly believe anyone committed a crime, then they identified the wrong criminal. Their judicial system should target the officials within the United States government who directed the operation.

Her spending even one day in a prison cell will stain American leadership.

I hope frantic diplomatic efforts are underway to prevent her imprisonment. But recent history does not offer much optimism.

Dr. Shakeel Afridi – the doctor who proved instrumental in ascertaining the whereabouts of Osama bin Laden – continues to languish in a Pakistani prison. Official Washington celebrates the great victory of killing the world's most wanted terrorist, but they left a man critical to the undertaking in the dust.

Even more outrageous is that those same people boasting about the operation disclosed highly classified information that enabled Pakistan to identify Afridi's alleged role. The U.S. left Alfridi behind, and it appears they will soon leave de Sousa behind.

The rendition program in which de Sousa participated in Italy generated controversy. The raid in Pakistan remains controversial in some circles. Both reportedly caused diplomatic friction among representatives of their governments.

However, controversy does not excuse Washington from dropping like dead weight those who implement their national security decisions. America's leaders should be ashamed.

As Afridi languishes and de Sousa likely not far behind, the "Leavenworth 10" military service members remain incarcerated for supposed crimes committed during the wars in Afghanistan and Iraq. To many, the sentences are unjustified given situations in which they are forced to make life-and-death decisions within fractions of a second.

Many of those jailed assuredly do not deserve life sentences for erring on the side of protecting their own when threatened. They were simply executing the orders of our commander-in-chief – with the full consent and knowledge of Congress – to the best of their ability.

Meanwhile, the administration works feverishly to release radical Islamist terrorists from the Guantanamo Bay, Cuba detention facility, and close its doors forever. Officials believe at least a dozen detainees released from the facility have launched attacks on allied forces in Afghanistan that left members of the Armed Services dead.

A March 2016 summary on recidivism from the Office of the Director of National Intelligence indicates that of the 676 detainees released to other countries, 118 are confirmed of reengaging in terrorism and 86 are suspected of doing so.

The administration's priorities are backward.

Common sense would dictate the U.S. rehabilitate those who may have committed some crimes while serving in deadly combat zones. Common sense also dictates that the leaders not leave behind those who have sacrificed, often at great personal risk, to support the U.S. and its interests.

Prioritizing the rehabilitation and release of Islamist terrorists who have committed themselves to murdering Americans stands at the height of absurdity.

Who will ever again jeopardize their life to serve their country when they see how it treats its heroes versus how it treats those guilty of harming and killing its heroes?

Americans and foreign assets deserve so much better.

Republican Pete Hoekstra is the Shillman senior fellow at the Investigative Project on Terrorism and the former chairman (R-Michigan) of the U.S. House Intelligence Committee. He is the author of "Architects of Disaster: The Destruction of Libya" (The Calamo Press, October 2, 2015).

We can only hope and pray

If Donald Trump keeps his word(s) about leaving no American in or out of uniform behind, then the demands DEMANDS for their release should begin now!

Treason by any other name

Let's be honest Obama has and is committing treason and destroying our intelligence assets and agents is a primary weapon for his blatant treasonous against this nation...

He rewards Iran with 150 billion dollars to commit destruction and mayhem, supports the release of terrorist from GITMO and wants to disarm the American to prostrate this nation before Islam, with Ben Rhodes crowing about the deception of the nation.

Thank you for the article. But Obama's priorities are only absurd if one assumes that he values America as a free country and wishes to see us to continue to live free and well.

In fact, I believe Obama hates and fears freedom and individual rights and does his best to destroy them wherever he finds them, both here in America and around the world.

Every single action which Obama and his appointed cronies have taken since Obama assumed office. Particularly his enthusiastic embrace of vicious murdering tyrants, Castro and Chavez and their followers, as well as crude Middle Eastern Islam driven dictators.