ISIS Commander Claims To Be In UK

An ISIS commander with a reliable presence on Twitter claimed to be in Scotland or elsewhere in the U.K. this week.

Abu Amer al-Jazrawi posted a photo March 24 under a now-deleted account "Jazrawi_Dar3a," showing Japanese food he claimed he was eating. 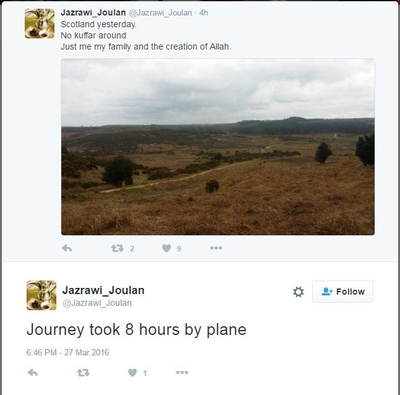 Three days later, al-Jazrawi posted a tweet from a different account, "Jazrawi_Joulan" claiming he was in Scotland along with a picture of a barren landscape similar to Scottish moors. "Scotland yesterday. No kuffar around," he wrote. "Just my family and the creation of Allah."

"Journey took 8 hours by plane," he wrote in a separate tweet.

Wednesday, al-Jazrawi tweeted a notice of a meeting for Muslim converts in Crewe, England, which is located 36 miles south of Manchester.

Al-Jazrawi does not appear in the photos, and it is not known whether he was telling the truth about his location. But his tweets come at a time when the world is on alert against the threat from ISIS infiltration of Europe.

The task we face is not unlike that faced by Western intelligence agencies that must pore through thousands of pieces of information looking for facts.

Al-Jazrawi is believed to be a Saudi who, according to Italy's Il Tempo newspaper, is part of an effort by ISIS to transfer operations to Libya with a goal of attacking Europe.

"Among the team of prominent jihadist elements there would be Abu Amer al-Jazrawi, a Saudi commander in the organization," Il Tempo reported in February.

Last year, ISIS announced that it created a continent-wide jihadist network to help slip jihadis undetected in and out of Europe, which the Investigative Project on Terrorism reported in December. Intelligence sources have since corroborated much of what ISIS announced in its "Black Flags" publications, evidenced by a New York Times report published this week.

The IPT has observed a pattern of bragging from al-Jazrawi, who tweeted during the Paris attacks last November, "Syrians were sent by Islamic state as special undercover sleeper cell agents."

As it turned out, several of the members of the Paris/Brussels cell fought in Syria and infiltrated the flow of Syrian refugees into Europe.