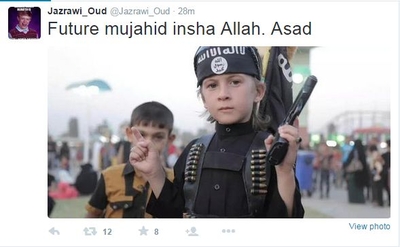 We've all seen them by now: the nightmarish photographs of a young boy holding up a severed head; Or carrying a Kalashnikov he is well-trained to use, schooled and prepared for the killing of infidels. We have seen them strapped with suicide vests, eager to die for Allah. Now a new report, "Depictions of Children and Youth in the Islamic State's Propaganda 2015-2016," reveals that there are more such child militants in the Islamic State than we'd previously realized – and it's only getting worse.

Terrorist organizations such as al-Qaida, Hamas and Hizballah have long engaged children in their attacks, and child soldiers are a tragic, if long-held reality of rebel warfare. But the Islamic State (ISIS), according to Georgia State University researchers John Horgan, Mia Bloom and Charlie Winter, has "heavily championed" using children as militants and as messengers for their cause, especially through propaganda videos. "Indeed," the authors note, "on an almost daily basis, children are featured in multiple contexts, from highly-publicized executions and training camps to Qur'an memorization fairs and dawa [proselytizing] caravans."

To do this, they examined "the children and youth's [sic] country of origin, role, location of death, and under what circumstances they were killed," with an eye towards understanding "the Islamic State's long-term vision for its children and youth."

Hogan and Bloom have written previously about ISIS children, often referred to as "cubs," or "ashbal," who are "subjected to a systematic process of indoctrination as they're trained by the group to be fully-fledged militants." Many of these children are born to ISIS fighters and their wives or sex slaves. Others are brought there by their families from abroad. Some have come themselves, alone – several of them from Europe and the U.S. But others, Hogan and Bloom discovered, are "abandoned children found in IS-controlled orphanages [and] children coercively taken from parents."

The indoctrination process is slow, measured, and skillful. Children are brought to public executions from an early age, so as to inure them to the horror and to acclimate them to violence itself, like a vaccination against empathy or compassion. They are schooled in warfare along with Quran studies, and taught early the glories of martyrdom – so much so that in the photographs of 89 martyred children the Georgia State University team studied, nearly half had died with smiles on their faces. "In one case," the authors write, "a pre-adolescent child smiled widely at the camera, wearing his baseball cap back-to-front, sitting atop what appears to be a fairground ride." Whether this is a propaganda photograph, used to encourage other children to "come to the fair," as it were, or a depiction of the child's actual mood knowing he was soon to die a martyr, we will never know.

Although the 89 photographs depict all the known children and youth eulogized on the Internet by the Islamic State between January 2015 and January 2016, the authors note, there may be more for whom records have not yet been found. All of them are male. Sixty percent of them were adolescent (defined as between the ages of 12 and 16); 34 percent older-adolescent (ages 16-21); and six percent "pre-adolescent" (ages 8 -12). A third came from abroad, either from the West or elsewhere in the Middle East-North African region.

Those numbers are rapidly increasing. "On a month-to-month basis," the authors say, "the rate of young people dying in suicide operations rose from six in January 2015 to 11 in January 2016." Notably, too, the number of child suicide attacks in January tripled January 2015 figures. The authors believe this increase signals that such methods of war "are becoming more tactically attractive" to ISIS leaders.

Most of the children killed in the Islamic State over the past year were native to the region, coming especially from Syria and Iraq, such as 11-year-old Abu Imara al Omri, who drove an explosive-packed truck into a group of Syrian soldiers. But surprisingly, more children from some Western countries were killed than from Lebanon, Libya, or Saudi Arabia, with the majority of Westerners coming from Britain (like Abu Khalid al-Britani), Australia (like Jake Bilardi, a convert), and France.

"It's interesting the degree to which the parents are giving the organization access to their children," Mia Bloom told CNN. "It's not a coercive endeavor like what we saw in Africa. The kids are not being kidnapped. The kids are not being coerced. For the most part, what we're seeing is kids posing with a big smile and at least in one case saying goodbye to the parents."

Some children do escape, according to a January CNN report. One, age 12, told CNN that he had been one of 60 boys being trained as a suicide bomber, including a 5-year-old. Interestingly, his testimony contradicts Bloom's finding that the children were not coerced; in fact, it seems from this and other news reports that some children are starved and terrorized.

Couple this with the stories of young girls being forced into marriage, and an image emerges of the kind of future being built by ISIS leaders. These are children without a childhood, children for whom suffering, violence, death and despair are a normal way of life. There is no joy here. There is no innocence, no tenderness.

Soon, these children will be grown. Even sooner, some will begin having children of their own – children they will raise to know all that they've been taught, children born and raised empty of humanity or love. These children, and their children, become the most powerful, most lethal weapon of the Islamic State – not for what they do, but for who they are and are becoming: a force no bombs, no army, can defeat. Unless we find a way to save them. Soon.

Correction: The study's authors are from Georgia State University. An earlier version of this article incorrectly stated their affiliation.

Islam is Islam any where in the world. American infidels should be extremely concerned on Islam's expansionism in the U.S. and support and vote for candidates that will embrace traditional Christian values! Our countries and children's future are in imminent danger by Islamic dogma!