Oberlin College Joy Karega has posted numerous anti-Semitic sentiments on her personal Facebook page, including claims that Jews or Israelis are behind the Sept. 11, 2001 terrorist attacks and control most of the world, reports The Tower. 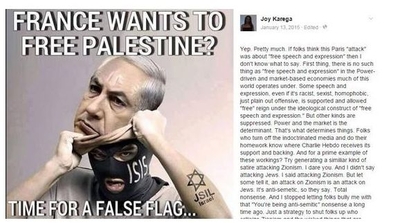 Karega, an assistant professor of Rhetoric and Composition, even blamed the Israelis and the Mossad, Israel's national intelligence agency, for orchestrating the Charlie Hebdo terrorist attacks in Paris and even for creating ISIS itself. Shortly after the January 2015 attacks, Karega shared a picture that explicitly suggests the Mossad was behind the attacks in order to prevent France from supporting the Palestinians.

"This ain't even hard. They unleashed Mossad on France and it's clear why," wrote Karega in her status associated with the picture.

The professor also claimed that ISIS was not Islamic and that the terrorist organization is a product of "a CIA and Mossad operation..."

Moreover, Karega shared a blog post that featured a video speech by Louis Farrakhan, the radical Nation of Islam leader who is notorious for his anti-Semitic views. In the video, Farrakhan states that "is now becoming apparent that there were many Israeli and Zionist Jews in key roles in the 9/11 attack.

"Farrakhan is truth-telling in this video," writes Karega.

She shared other anti-Semitic posts suggesting that Jews rule the world and the U.S. government. One post featured a photo of Jacob Rothschild featuring text that reads: "We own nearly every central bank in the world. We financed both sides of every war since Napoleon. We own your news, the media, your oil and your government."

The professor even took issue with a report concerning the Obama administration granting $12 million to Holocaust survivors.

"One of these days some of My Peoples gonna learn who ALL American presidents work for and why they are chosen and placed in office."

Oberlin College officials do not appear to have reacted to a consistent stream of conspiracy theories involving Jews.

**Update: Oberlin President Marvin Krislov issued a statement Friday saying the school respects Karega's right to express her opinions, but that "does not signal institutional support for" them.

Karega made a point Thursday of striking a defiant tone in the Tower article's wake, describing herself as a victim of "bullying and intimidation."

The exposure of Karega's extremist posts comes amid rising concern that Jewish students at Oberlin campus are subject to increasing anti-Semitism. In contrast, Connecticut College Professor Andrew Pessin was forced to take a leave of absence nearly a year ago based on one Facebook post that was twisted out of context.

In an open letter to the Oberlin administration, a student-led group dedicated to combating anti-Semitism at the college outlined various anti-Semitic incidents that occurred on campus.

George Mason University Law Professor David Bernstein cited the example of an Oberlin alumna, for example, recounted how various students on campus dismissed the Holocaust as "white on white crime."

A "Professor of Composition" that uses the word "Ain't"?

If a White professor uttered such venom about the alleged misdeeds and malevolence of Africans and African-Americans, her tenure would be measured in nano-seconds.

I'm disappointed in Krislov's acceptance of Karega. Though she has every right to express her views, because her views are dangerous and distorted, Oberlin needs to distance itself from her. It is extremely irresponsible to keep her as an Oberlin educator, as she is in a position of misleading students and fostering hate and stereotyping. She may think of herself as a "free-thinker" and Oberlin has always supported free-thinkers of all kinds. But this is not simply "free-thinking". This is venomous and baseless discourse. She represents the kind of dangerous hate-mongering that is poisoning our country.

Dangerous person in an influential position

This is not freedom of speech but a person of power over young, idealistic minds trying to incite hate and vitriol on the premise of educating. This is very dangerous and reminds me of the 1930s rise of hitler with his propaganda and incitement to hate and blame on the Jewish people!!....to allow such a person to maskarade as a teacher of critical thinking based on unbiased exposures really reduces the quality of this fine college!! WHAT IS THE ADMINISTRATION THINKING.??? I certainly cannot recommend Oberline anymore to students wishing to great a quality education!!! This is not free speech but the equivalent of showing Pornography in the classroom!!!! SHAME ON YOU, OBERLIN for your allowance of a pretense for education !!!