Dozens of Swedish citizens received threatening letters with "ISIS" signatures, calling for them to either convert to Islam, pay tax to the terrorist organization, or be killed – according to a Russia Today (RT) Arabic report Sunday translated by the Investigative Project on Terrorism (IPT).

Official Swedish television reports that police are taking the threats seriously, considering the messages were disseminated in Swedish to people throughout the country. The messages included the national identity number of the targeted individuals in an effort to enhance the terrorists' credibility.

"The messages gave a choice between Islam, tribute, and murder by beheading or perhaps blowing up houses of the owners, after the deadline set by the sender three days from the date of dispatch," reads the report. 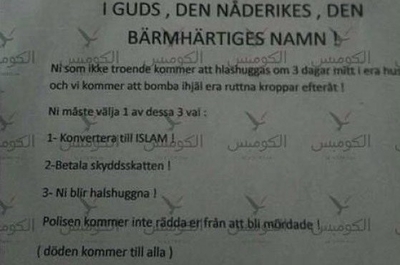 The city of Sigtuna's policy chief, Emil Anderson, "called on the population to deal with all developments seriously and to report any suspicious behavior in the vicinity of their residences." Police were increasing their presence where the threats were received, according to an IPT translation of the Arabic service associated with Sweden's Sverige Rost newspaper.

It is unclear who sent the emails and an investigation is underway, Anderson said.

Sigtuna's head of security, Thomas Mile Born, is skeptical that the threats came from ISIS, believing that they may be a hoax, reports Sweden's Sigtunabygden newspaper.

However, Swedish citizens previously have been targets of radical Islamist messages.

In October, members of the Assyrian Christian community in Sweden were told to "convert or die" in messages linked to the Islamic State, reported the Daily Mail. Threatening graffiti was found on restaurants and businesses in Gothenburg – a major hub for radical jihadist recruitment. Terrorism expert Magnus Ranstorp has referred to the city as "the Swedish Centre for Jihadists."

One Assyrian Christian living in the city said he discovered threatening messages written on his restaurant walls, including "convert or die" and "the caliphate is here." Similar messages and the ISIS logo were painted on a neighboring pizzeria, while other non-Assyrian-owned establishments were not vandalized, reported Breitbart.

According to the Swedish newspaper Aftonbladet, at least 150 jihadists from Gothenburg are believed to have fled to join ISIS.