The Nov. 20 terrorist attack at the Radisson Blu hotel in the capital city of Bamako shows that radical Islamists continue to be active in Mali. Reportedly, the attack was to thwart the peace accord between the Azawad National Liberation Movement (MNLA) seeking autonomy, and the Mali government. I believe the Islamists embedded in the northern region want to hinder the peace process so they can create an Islamic caliphate.

The Islamists reportedly affiliated with Moktar Belmoktar's al-Mourabitoune militia killed 18 hotel guests and one local guard. Two of the Islamist gunmen were also killed. I had stayed at the Radisson Blu hotel in the past and found it popular with foreign business people, diplomats, and airline personnel.

In March 2012, Mali's President Amadou Toumani Toure was deposed in a military coup due to his lack of support for fighting the northern Tuareg separatists who had become affiliated with radical Islamists and continually put the Malian soldiers under siege. The Islamists took advantage of the poorly equipped military and seized control of the towns of Timbuktu, Gao, and Kidal.

Instituting Sharia law, the Islamists brutalized the townspeople, destroying radios, TV's, musical instruments and modern conveniences not in accord with their strict interpretation of Islamic tenets. To add to the instability, massive amounts of weapons came back from Libya with Tuareg fighters after the fall of Muammar Gadhafi. With the arms also came an influx of jihadists. Northern Mali, the size of Texas, became the epicenter for Islamists from as far away as Pakistan and Afghanistan. Some of the Islamists had been involved in the Sept. 11, 2012 attacks on the U.S. diplomatic mission in Benghazi, Libya.

I first visited Mali in January 2000 with an archeological group, visiting UNESCO World Heritage Sites in Africa and the Middle East. Mali was a highlight with its ancient mud mosques in Djenne and Timbuktu. A center of education and religious learning Timbuktu's importance dated back to the 15th century; home to a vast collection of historical manuscripts which the radical Islamists tried to destroy.

I was in Mali again on Sept. 18, 2012, shortly after the Benghazi attack, and chatter indicated al-Qaida affiliates were involved. My visit was for the dedication of an elementary school that our foundation helped fund for my friend Yeah Samake, who was the mayor of Ouelessebougou, a town located 50 miles south of Bamako. Yeah arranged for me to meet with government and religious leaders, and to visit the Mintao refugee camp in neighboring Burkina Faso where we met with Tuareg elders. The Malians I met with were moderate and very concerned about the radical Islamists who had taken control of the northern region displacing 400,000 ethnic Tuaregs and Arabs.

Within weeks, the Islamists were driven from Timbuktu, Gao, and Kidal, scattering them into the vast desert and frontier mountain region near the Algerian border. The French forces, however, should have destroyed the Islamist militias when they had the chance since the concern was that they would return. Today, the French and U.N. peacekeeping forces are still fighting these radical Islamists, with over 40 soldiers killed since 2013.

AQIM was the outgrowth of a dissident group in Algeria that in the 1990s attempted to overthrow President Abdelaziz Bouteflika's regime. In 2003, they moved into Mali and became affiliated with Ansar al-Dine, a terrorist group composed of Tuareg fighters that had left the MNLA. The region soon became a safe haven for Islamists including Movement for Oneness in Jihad in West Africa (MOJWA) and other foreign insurgents.

The Tuaregs were pushed aside in a power struggle with the Islamists. In a dispute with al-Qaida leaders, Moktar Belmoktar broke away and formed his own militia, which in January 2013 was responsible for the attack on an Algerian natural gas plant, killing 39 foreign workers.

When I visited Mali in March 2013, the French had driven the Islamists from the three northern towns. Yeah arranged for me to meet the French ambassador, who was confident the Islamists would be defeated. French troops would stay until after the national elections could be safely undertaken. Planning to visit Timbuktu, I met with Yeah's friend Mahamadou Alou Toure, the mayor of Bourem Sidi-Amar, a town located 30 miles from Timbuktu. Knowing the area well, he agreed to travel with us and arrange for meetings with village elders, and Tuareg dissidents in Timbuktu.

Early the next morning, we started our long drive to Douentza, a town 400 miles north of Bamako, where an army escort would take us through the desolate desert to Timbuktu. Earlier that day we stopped at the Islamist base in Konna that was destroyed by the French. Burned out gun-mounted pickup trucks, armored vehicles, and ammunition bunkers indicated a fierce battle had taken place, with many Islamists being killed. 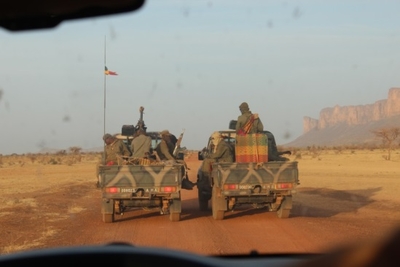 Our military escort consisted of 20 soldiers and four pickup trucks with mounted machine guns. The route covered 120 miles over the rugged terrain. The concern was that Islamists could still be embedded in the area, especially near the Niger River crossing. Mahamadou made arrangements for a ferry to take us across, arriving in Timbuktu after midnight; encountering only two flat tires in the twenty-hour trip.

We met the next morning with Col. Keba Sangare at Fort Elbekaye. Sangare noted security had improved dramatically since a year earlier when Timbuktu was under siege. More than 1,000 Islamists had been driven out of the area since January. However, Sangare noted that if the French troops were to leave it would be difficult to keep the region secure since the Islamists would return.

With six added military vehicles and more than a dozen soldiers, the caravan traveled to Mahamadou's village, Bourem Sidi-Amar. Hundreds of people lined the narrow dirt road waving Malian and French flags and cheerfully dancing, singing songs, and playing musical instruments which were not allowed under Islamist control. Sangare told the villagers that they could count on the military to protect them. The village elders said they were thankful the Islamists were gone and free of their brutal acts.

Timbuktu felt peaceful, with shops open again and people mingling around. On a street corner, young boys huddled around a radio listening to music, which was forbidden under Sharia law. The Hotel Colombe where we stayed barely managed to remain open, the manager told me. Without the foreign journalists and government people they could not survive. He was hopeful that security in the area would continue so tourists could again arrive at the airport, the main access to Timbuktu.

I was awakened at 4 a.m. the next day by several explosions. At first I thought it was a dream. Then reality set in as the continuous gunfire lasted several hours. At daybreak, Mirage jets traversed overhead. A knock on the door summoned me to meet at the neighboring military base where Col. Sangare gave us a briefing. He noted that at a checkpoint five miles from Timbuktu a vehicle drove past without stopping. In the firefight that ensued, five insurgents were killed and one was captured. An insurgent in the vehicle detonated his suicide vest, killing one soldier and injuring six others. At the airport, two suicide bombers were killed before they could detonate their vests. Timbuktu was under tight security, and leaving would be difficult since no military escort would be provided.

In the hotel lobby, the next morning a Swedish TV producer alerted me that a U.N. Humanitarian Air Service plane was coming to pick up 10 journalists. He suggested I call to see if I could get on the flight since there were no other evacuation plans. With the help of the U.S. embassy in Bamako, the U.N. dispatcher luckily had a seat available. Under tight French security, the plane departed mid-morning for the town of Mopti, where I arranged for an SUV to drive me back to Bamako, a grueling fourteen-hour journey.

The attacks in Timbuktu were the first in several weeks. A few days after we left, the Islamists came back and attacked the military base, coming over the back wall of the hotel where we had stayed. The liberation of Mali's northern towns may be short-lived since Islamists continue their hit-and-run attacks. The insurgents' tactics now include suicide bombers infiltrating the towns and villages, scaring people and their freedom. The attacks at the Radisson Blu hotel in Bamako, and in Kidal last weekend have further shaken Malians.

With limited French and U.N. peacekeeping forces and a stretched Malian military covering such a wide territory, the recent attacks will not be the last by the Islamists. If France could not stop the Islamists from creating the carnage on Nov. 13 in their own backyard, then attacks in Mali will be even more difficult to stop since intelligence resources are limited. If Moktar Belmoktar was behind the Radisson Blu hotel attack, it could have been in retribution for the French military incursion in northern Mali, and to show support for the Islamist attacks in Paris.

Disrupting the peace accord between the Tuareg separatists and the Mali government could also give the Islamists more time to reach their goal of an Islamic caliphate in northern Mali.

John Price served as Ambassador to the Republic of Mauritius, Republic of Seychelles, and Union of Comoros from 2002-2005.