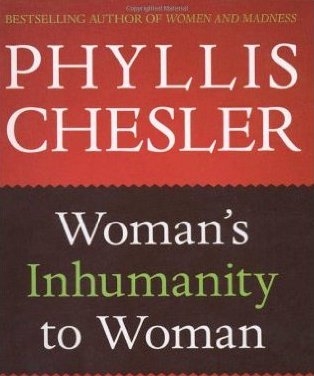 There was a time when most people believed that honor killings – if they had even heard of them – took place far away, in places like Afghanistan and Algeria and Iran.

These days, we know otherwise. They happen here in the West as well: in Texas, in Toronto, in Paris and Amsterdam.

Now Phyllis Chesler, the pre-eminent authority on the phenomenon and author of the most comprehensive study on honor killings, has found something else we didn't know before: that many of these killings (and other honor violence) are perpetrated by women. "Women play a very active role in honor-based femicide," she writes in her latest report, "both by spreading the gossip underlying such murders and by acting as conspirator accomplices and/or hands-on killers in the honor killing of female relatives."

In an e-mail interview, Chesler, also the author of the award-winning memoir, An American Bride in Kabul, spoke about her findings and what they mean.

Abigail R. Esman: Most people, I think, would be surprised to know that women are involved in honor killings and honor violence. It's even more shocking to see how often they are the ones who actually commit the murder. Were you surprised by what you found?

Phyllis Chesler: Most people, including scholars, underestimate or deny the extent of women's violence towards women mainly because male violence is far more pervasive and dramatic. The fact that feminists insisted that women are morally superior to and more compassionate than men led me to research, and after 20 years, to publish Woman's Inhumanity to Woman. Thus, I was able to recognize the crucial role that women play in honor killing, especially in tribal, shame-and-honor cultures.

Like men, women also internalize sexist, anti-woman values; further, unlike men, older women are expected to force younger women to conform and to punish them if they fail to do so. We are, by now, increasingly familiar with the role women play in arranging female genital mutilations. But I also noted that a number of high profile honor killings in the West featured women in "starring" roles: the Palestina Isa case in Missouri, the Sarah and Amina Said case in Texas, the Noor Al-Maleki case in Arizona, the Shafia case in Canada, (in which three daughters and a first wife were killed), the Shafilea Ahmed (2003) and the Surjit Athwal cases in the UK. Mothers either physically killed their daughters or served as conspirator accomplices without whom the honor killing would not have succeeded.

ARE: Can you cite some numbers here so we have a better sense of what we're talking about?

PC: Reliable and comprehensive statistics do not exist. This is a "hidden" and largely unprosecuted crime, like incest, normalized daughter-beating, arranged marriage, forced face-veiling, and polygamy. The United Nations insist that only 5,000 honor killings take place each year. In my opinion, that may be true only for the Punjab or for Pakistan. In 2010, there were roughly 900 reported honor killings in the northern Indian states of Haryana, Punjab, and Uttar Pradesh alone while 100-300 additional honor killings took place in the rest of the country. Also in 2010, according to the Human Rights Commission of Pakistan, 800 women were killed for honor in Pakistan. According to the Aurat Foundation, a Pakistani human rights organization: "the cumulative number of women and girls who died during the years 2008 – 2012 due to murder, 'honor' killing or suicide is 13,583."

Women do not honor kill more often or more torturously than men do. Their role is mainly that of warning, monitoring, and then gossiping against the targeted girl—and then luring her to her death with false promises of forgiveness. However, in this study, I found that 39% of the perpetrators in my small, non-random, qualitative study were hands-on killers—and that they torture-murdered their daughters 92% of the time. Sixty-one percent of the women, served as conspirator-accomplices. One hundred percent of the hands-on female killers were arrested as compared to 53% of the conspirator-accomplices. This difference is statistically significant.

ARE: How do you account for this? Why would women kill their own daughters and not protect them?

PC: An honor killing family which is geographically located in a rural, agricultural, illiterate society has good reason to believe that if they fail to kill a "disobedient" daughter, they will be socially shunned, economically impoverished, and that no one will marry their other daughters and sons. And they are right. However, citizens of such cultures—including highly educated, mobile, wealthy, and professional mothers—still practice honor/horror killing in situ as well as transport this custom with them to the New World. Women fear being blamed and punished for having a "disobedient" daughter who brings shame to her family. Also, the female hands-on killers in this study may have torture-murdered their daughters because they are enraged that a daughter would force them to act in so ugly a way—and because this is their only opportunity to treat another, younger female relative the way they have been treated (bullied, beaten, terrorized) by older women and men all their lives.

ARE: Are there factors that make some women, or women in certain cultures, more inclined to contribute to honor killings than others? That is, are there more Iraqi women or more Syrian women or more Indian women who are likely to do this? And if so, can you hazard a guess as to why?

PC: I believe this practice is essentially tribal and ethnic, not religious, in origin. Therefore, Hindus (but only in India) as well as Muslims perpetrate this crime. However, in both instances, those who honor kill believe, truly or falsely, that their religion backs them up, demands it, or at least will not punish it.

ARE: How do the numbers look for these occurrences in the West, and among which communities?

PC: This is my fourth study on honor killing. I have found that it is practiced in almost all Muslim-majority countries, in Hindu India, and in Muslim India. I have also found that among immigrant communities in the West that in this study, such perpetrators come from Afghanistan, Egypt, India, Iraq, Pakistan, Turkey, and the West Bank. In my previous studies I found that perpetrators also came from Albania, Algeria, Bosnia, Egypt, Ethiopia, Guyana, and Morocco, among others.

ARE: How do these numbers compare with the number of women who kill their daughters in ordinary domestic violence?

PC: Women do not routinely kill their daughters in Western settings where child abuse and domestic violence certainly exists. An honor killing is different. It is a family conspiracy that targets a young girl or young woman, one backed up by parents, grandparents, sisters, brothers, cousins, aunts, and uncles. Nothing like this exists among Western families. At most, some religiously fundamentalist families in the West may shun a disobedient daughter but they will not kill her.

Having said that, the FBI does not break down "parents" by gender in ordinary domestic violence involving children. But it does admit that the majority of children who are killed by their parents are killed by their fathers, not their mothers, and that they are very young children: with exceptions, mainly infants and toddlers. And the fathers do this on their own, they do not act in concert with other family members and they beat and even kill children because their cries interfered with a baseball game, or because they were not toiled trained, or because the fathers were angry men who were also drunk or high. Addict mothers do seriously neglect and abuse children whom they sometimes kill but never as often as their male counterparts do. We have no comprehensive statistics about this.

And yes, some American mothers do psychologically and verbally abuse their daughters (because they are not sons, because the mothers dislike women and dislike themselves, because they can get away with it) but they do not kill them; they do not kill their teenage daughters or their daughters between the ages of 18-30 and they do not do so as part of a planned family conspiracy. When and if a mother kills a child, daughter or son, she is not seen as having redeemed her family's honor. She does not commit murder in order to save her family's reputation or redeem her own. If she does, and she is caught, she is prosecuted, not glorified. She is seen as a criminal, or as mentally ill.

Some individual studies suggest that stepmothers kill stepchildren more often than biological mothers kill their own children—but we are talking about children under the age of five who are not yet old enough to be considered culturally "disobedient." Again, no comprehensive state by state or national statistics can be found. But it is very clear that these are two completely different situations.

ARE: What alerted you to this issue in the first place to make you want to study it so thoroughly?

PC: As anyone who has read An American Bride in Kabul knows, I myself was, quite unexpectedly, held captive there when I was very young. I saw the rivalry and hatred between co-wives in a polygamous family. I saw how my mother-in-law abused her female servants. I lived gender apartheid and was able to see versions of it anywhere, everywhere.

ARE: Do your findings have any bearing on the refugees and immigrants coming to the West? How can we manage the influx of people from these cultures and still protect girls and women, daughters and wives?

PC: Given the huge humanitarian crisis the West now faces in terms of refugees, I would suggest accepting the persecuted first and the persecutors not at all. Thus, Christians and Yazidis before Muslims; women before men—although, we are, disconcertingly, seeing a male-majority among the wave of immigrants to Europe. Here's the task: As I've shown, women have also internalized tribal shame-and-honor values. We would need to educate them very carefully about Western values and laws. Eventually, the same is true for their male counterparts. This will be an expensive and time-consuming proposition. It is important to note that many pro-Western immigrants from tribal cultures oppose the mass immigration currently underway because, they say, such immigrants will transport the same values with them to the West.

ARE: Do you think this will help save other girls going forward? What else can we do?

PC: First, it is important to hold accomplices liable for their crimes. To some extent, we already do so in the West. Second, we need to educate law enforcement, physicians, social workers, and schoolteachers that when a Muslim girl is escorted to and from class by her brother, misses classes, is visibly bruised, insists on covering her bruises with a face veil—that she may be in imminent danger. If such a girl is actually courageous enough to turn to the authorities and ask for help (as a number of victims in the West have done), she will likely need appropriate housing and a witness protection program. Ideally, it will also be necessary to find alternative, extended families for them since these potential victims are often individuals whose identities are moored in collectivity, not individualism. It's all a huge and difficult undertaking. But it must be done.