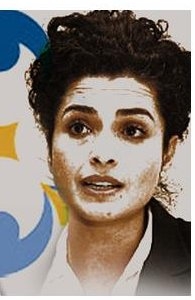 Last week, we showcased some pretty rabid, hateful rhetoric posted on social media by Lamis Deek, a lawyer and board member for the Council on American-Islamic Relations-New York (CAIR-NY).

The story showed how Deek's blind hate for Israel is consistent with many of her CAIR colleagues, including some who equate the marauding, beheading barbarians of the Islamic State terrorist group with the Israel Defense Forces (IDF). It featured a picture reposted on Deek's Facebook page last August, glorifying the Palestinian Islamic Jihad terrorist group's Al-Quds Brigades. The PIJ logo is clearly visible on a masked man featured in the image we published. 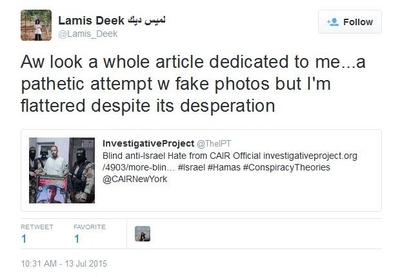 The self-described "Human Rights Advocate" must not be a regular IPT reader, because she just caught wind of the story Monday.

"Aw look a whole article dedicated to me...a pathetic attempt w fake photos but I'm flattered despite its desperation," she wrote on Twitter. 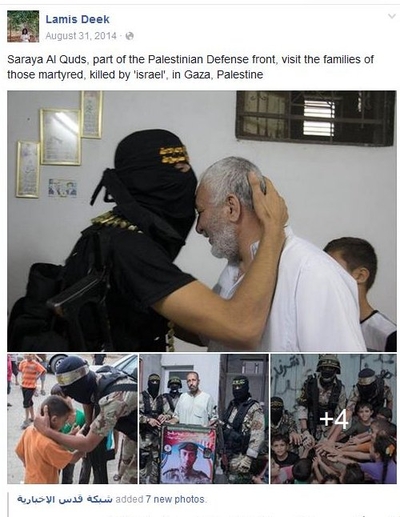 With all due respect to Ms. Deek, a couple things need to be noted. If the image is a fake, you only have yourself to blame. We took it straight off your Facebook timeline where you reposted it and others from the Quds News Network. The entire post, including the picture you say is a fake, was still on your timeline this afternoon.

The next time you accuse someone of posting fake photos you might want to check to make sure you haven't first shared them publicly yourself.

And we're not sure you're really flattered. 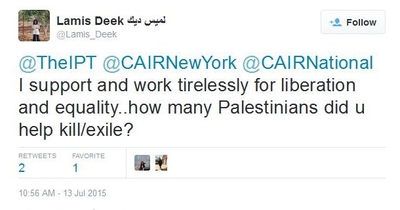 After falsely accusing us of doctoring an image, you then fired off a series of accusatory Twitter posts based on nothing at all. When we didn't immediately reply, you wondered if we were "puckered out from milking ur creative juices on that article....take a nap I'll wait."

Among them, "how many Palestinians did u help kill/exile?" and "tell me about ur service in the least moral army (gang of thugs) in the world."

We've never served in armies for Syria or Iraq, which have used chemical weapons against their own people, or fought in armies for Iran or even Israel. We just accurately noted what you've said. That seems to have upset you.

Thanks for making her known

I've never known about her but I see hate is still alive and well in CAIR and lo and behold, tied to "Palestinians" (quotes intended). When someone from the very organization that sponsors pro-Islamic events and hijacks a Women's March for a Sharia platform, shows their true colors of racism, genocide, manipulation of facts, and claims victimhood, you know this is a real problem for America. CAIR is playing the Liberal sheep well....and the battle is just beginning.

It appears Ms Deek is trained in the Art of Propaganda to some degree. When she has no defense she attacks to set you off kilter and put you on the defensive. It makes no difference, since truth wins out in the end although sometimes it seems like an eternity waiting.Actions do speak louder than words and the envisioned Islamic Jihad that is modeled after that of the MuslIm Brotherhood wIll by Its very nature eventually become inexplicable for CAIR. They under estimate the strength, conviction of faith, and disdain for outsiders telling them they're idiots and have been living under a terrible government for 280+ years. This is why people cross deserts or hide in wheel wells of planes to come here.

What a stupid woman! Good for outing her!