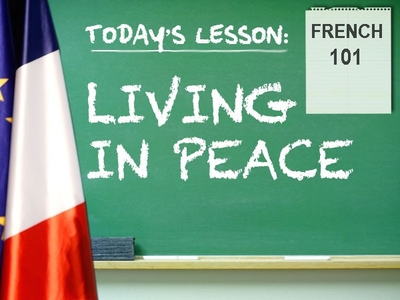 On a street in Paris's popular 6th Arrondissement, men in camouflage wielding Famas assault rifles patiently stand guard throughout the day. It is an unexpected sight amidst the chic designer boutiques and crowded restaurants, but one a hotel attendant nearby explains with a knowing glance: the building they guard houses an organization for Jews.

This is life now in Paris after the terrorist attacks that took 17 lives in January – including four Jews, massacred at the kosher Hyper Cacher market in the hours before the Sabbath.

And it isn't only here: in the Marais, long known for its Jewish population, a heavily-armed military presence has become commonplace, as France's government struggles to protect its Jews – and the rest of its population – from the murderous violence of Islamic terrorism in its streets.

Fear of impending terrorist attacks has gripped most of Europe since the outbreak of war in Syria, and particularly since the rise of the Islamic State (IS or ISIS). Of the several thousand European Muslims who have joined the IS and other jihadist groups there, hundreds have died in battle. But hundreds more have returned home, and of these, dozens have been arrested for planning to wage domestic attacks in Europe. (Amedy Coulibaly, the gunman in the Hyper Cacher attacks, did not join the jihad in Syria, but did pledge his allegiance to the Islamic State before the killings.)

In response, European officials have wrestled to find solutions to the threat, both punitive and preventive – from immediate imprisonment of those who return from Syria and Iraq to confiscating the passports of those suspected of planning to join the IS and its jihad.

But France is now instituting an additional approach, recognizing that the "war on terror" – and especially the war against Islamic terrorism – is not merely a traditional fight about nations and territory and power. It is a war about ideology. And so it cannot be fought, or won, simply with bombs and armies, with Kalashnikovs and beheadings and the capturing of combatants, but with ideas and propaganda and the capturing of minds.

Since 2012, for instance, the Catholic University of Lyon has offered classes on secularism for imams and other Muslims working in the civic sphere. In the wake of the January attacks, according to recent reports by Elisabeth Bryant, France plans to make such education mandatory across the country, enrolling "hundreds of imams," along with "chaplains working in prisons or the military." Prisons are known to be hotbeds for radical Islam and recruiting for jihad; Coulibaly converted to radical Islam while serving time in Fleury-Mérogis Prison, as did Cherif Kouachi, one of the two brothers who carried out the Jan. 7 Charlie Hebdo attacks.

Even more significant, France now is taking its war against radical Islam and racism to the schools, from teacher training to the addition of courses in secularism and ethics to the standard school curriculum. It is an initiative the rest of Europe – and the United States – would be well-advised to consider as well.

Such measures mark a major departure from the policies that European governments followed in dealing with their Muslim populations since the arrival of Muslim guest workers from the Middle East and North Africa in the 1970s. For the first several decades, the Muslim communities of Europe operated in something of their own universe, often ignoring European secular traditions as they established and pursued highly religious traditions of their own. In turn, Europe cast a blind eye on their activities, the mixed result of residual guilt over religious discrimination during the Holocaust and the belief – long-since abandoned – that Muslim guest workers would eventually return to their home countries anyway.

But they didn't; and as the European Muslim community grew, makeshift prayer spaces in vacant storefronts and cafes became too small to house their congregations. Mosques needed to be built. Yet the communities themselves could not afford to build them, and secular governments refused to provide funds, leaving the way open for (largely) Saudi-sponsored mosques across Europe, where Saudi-sponsored imams preaching a strict, fundamentalist and often violent version of Islam gained influence over Europe's rapidly-growing population of Muslim youth. Even in the past four years, according to Bryant, who cites figures from Le Figaro, "the number of mosques controlled by fundamentalist Salafi preachers [in France] has doubled from 44 to 89."

Coupled with this has been a similar approach in public schools, where Muslim students have been able to alter curricula to suit their own religious demands. Muslim girls frequently have been permitted to miss co-ed school field trips, for instance, or skip mixed-sex gym classes; and teachers are often threatened so severely by Muslim students when attempting to teach classes about the Holocaust that some have given up the lessons altogether. In such an environment, the powerful reach of recruiters for radical Islam – and for jihadist groups like the Islamic State – find easy prey. Essentially, Europe's current system has opened all the doors for them already. They only have to step through.

France's new initiative could begin to change all of this. While some accuse France of trying to replace Islamic fundamentalism with "secular fundamentalism," defenders of the program like Prime Minister Manuel Valls argue rightly that, "Secularism must be applied everywhere, because that is how everyone will be able to live in peace with one another."

Whether this will work in the face of the vicious Hydra of Islamic terrorism remains to be seen. Certainly, any change will take time – perhaps as long as a generation, or even more. But if it is idealistic in its aims, it is no less an ideal worth striving for; it was no less a warrior than Napoleon who once observed, "There are but two forces in the world: the sword and the spirit. In the long run, the sword is always vanquished by the spirit."

It's always been about ideology of Islam

It's not about any one group or sect. It's always been about the ideology of Islam. "Peace" or secular education will never work as long as people of any ilk practice and read from the texts of Islam. End of story. Now let's watch Obama open that massive mosque in Maryland.