A Palestinian terrorist stabbed and injured nine Israelis, four of whom remain under serious condition, on Wednesday morning after boarding a Tel Aviv bus. Security camera footage obtained by Israel's Channel 10 shows the terrorist chasing after civilians running from the bus following the initial attack, stabbing a woman in the back, reports the Jerusalem Post.

Witnesses and police said the terrorist repeatedly stabbed the bus driver before attacking other passengers. Three Israel Prison Service officers driving behind the bus chased the terrorist through parking lots and alleyways before shooting him in the leg and arresting him.

The Shin Bet, Israel's domestic intelligence agency, revealed that the 23-year old terrorist, Hamza Muhammad Hassan Matrouk from Tulkarem, admitted that he was motivated by this past summer's war in Gaza, recent Temple Mount unrest, and radical Islamic propaganda that glorifies "the reaching of heaven." 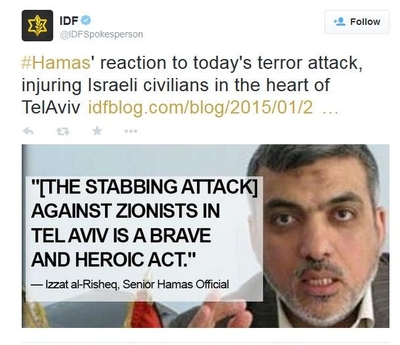 Hamas leaders quickly praised the attack and called for others to conduct similar attacks.

"A morning of resistance, a morning for the nation," Hamas spokesman Fawzi Barhoum wrote on his Facebook page, the Times of Israel reports. His post featured a photo of a combat knife on the ground surrounded by police tape.

Hamas official Husam Badran referred to the terrorist attack as "extraordinary" on Facebook and called for further "acts of resistance" by groups and individuals.

Hamas and Palestinian Authority officials and media frequently incite their populations to commit violence against Israeli civilians. Palestinian institutions systematically glorify terrorist attacks and praise the attackers, advocating for other Palestinians to emulate their violent actions.

Only an hour after the terrorist attack ended, Palestinian media glorified the Tel Aviv stabbing with numerous cartoons. 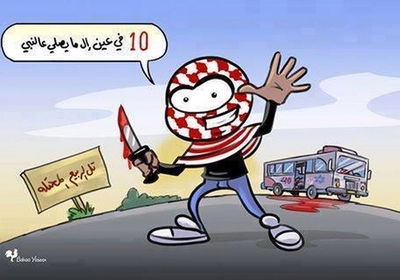 One of the cartoons, posted within 90 minutes after the attack, features a smiling terrorist with a bloody knife, praising the attack. The cartoon bus includes a Jewish star and the number of the bus line where the attack occurred with blood pouring out of the doors onto the street.

Palestinian media often boasts of terrorist attacks shortly after they have occurred. Numerous social media posts, for example, called for a "Knife Intifada," an uprising that entailed widespread stabbing of Israeli civilians.

Click here for an Investigative Project on Terrorism (IPT) comprehensive report on recent Palestinian terrorist attacks and incitement to violence.