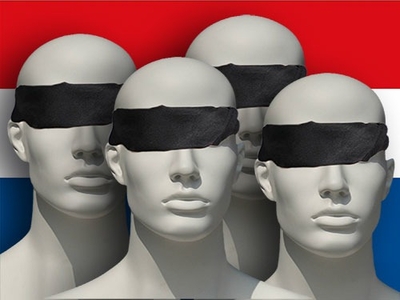 It took her more than nine years of working in the Dutch Ministry of Justice and Security, but Yasmina Haifi finally uncovered the secret truth about the Islamic State: It isn't Islamic at all. Actually, it's a Jewish plot.

Yes, really: that terrorist group formerly known as ISIS, responsible for acts of genocide in Iraq, for the beheading of American journalist James Foley, and for the murder of countless women and children in their war to establish a new Islamic Caliphate, Haifi revealed in a recent post on Twitter, is in fact a "preconceived idea from Zionists deliberately to make Islam look bad."

And IS leader Abu Bakr al-Baghdadi is not a Muslim terrorist, either. He's an agent of Mossad.

This, of course, is pure conspiracy theory, ranking in egregiousness somewhere between the blood libel and the theory that Jews are responsible for the 9/11 attacks. And yet, astoundingly, Haifi is not alone in her belief: numerous Islamic and Islamist websites claim NSA whistleblower Edward Snowden possesses documents proving the US, Israel, and the UK conspired to create ISIS in order to preserve the Jewish state.

And that is good enough for Haifi. Although she was dismissed from her post at the ministry immediately following her statement, she maintained in a subsequent radio interview, "I've read articles about it. There is plenty of evidence linking Israel and ISIS."

This must come as surprising – and surely disappointing – "news" to any number of Muslims, including the leader of Holland's own Muslim Unity Party (Partij van de Eenheid), Abdoe Khoulani, who earlier this summer announced his support for the terrorist group, posting on Facebook: "Long Live ISIS and inshaa-Allah on to Baghdad to take on all that riffraff there."

And how, too, to explain the all-Muslim pro-ISIS rallies in Amsterdam, The Hague, in Paris and elsewhere across Europe? How to explain that those same ISIS supporters march the streets performing Nazi salutes and chanting "Death to Jews"?

The combination of events – first, the anti-Semitism expressed by IS supporters and, then, the anti-Semitism by calling IS itself a Jewish plot – is more than simply dizzying. It is treacherous. And it can lead only to the creation of more widespread Jew hate, and thorough confusion among politicians, security agencies, and the police.

That, in fact, is the situation already being played out in The Hague, where Mayor Josias van Aartsen's response to pro-IS demonstrators who called for "All Jews to the gas" and threatened the execution of Jews and infidels worldwide, was to do absolutely nothing. Indeed, even after Dutch Parliament leaders demanded he cut short his vacation and return home to handle the issue, he defended his previous decision to remain on holiday in France during the unrest: "There was no chaos, no anarchy," he said. "I saw no point in bowing down to this."

Yet notably, many Muslims in The Hague – particularly those living in the neighborhood of the pro-IS marches – see it differently. Said one 34-year-old, identified only as Brahim, to a reporter for Dutch daily Telegraaf, "They need to get out of our [neighborhood] – or heads with beards are gonna roll."

Locals Kurds also voiced complaints. "I fled Iraq 14 years ago," one told the Telegraaf. Now I'm in Holland, and I have to deal with the same fundamentalists. No one protects me. The Netherlands has to crack down hard, before things get entirely out of hand." Agreed Brahim: "Pick them up and lock them away, would you, please?"

And yet it doesn't happen. The Josias van Aartsens of the West continue to wave off the threat of radicalized Muslims in European cities, American villages, the provinces of Canada. Think, for instance, of former Archbishop of Canterbury Rowan Williams, who felt Sharia tribunals would "unify "Europe and former Attorney General Marion Boyd, who advocated involving Sharia law in Canadian family courts. Such examples bring to mind the wise words of former British Home Office Minister Mike O'Brien, who 14 years ago observed that "multicultural sensitivity is not an excuse for moral blindness."

Except "moral blindness" is only a beginning. That "chaos" did not erupt in The Hague on July 26 is not the point. The worst violence, the most devastating abuse, does not spontaneously blast its way out of the blue. It begins with words, and with the ideologies that well-placed words create. Those words can be as simple as "kill Jews" or as complex as "Jews created the terrorist group ISIS, which beheads Muslim men and slaughters and enslaves women and children."

And as Brahim observed, during the demonstrations in The Hague, even toddlers "got a flag shoved in their hands, and cried allahu akbar" in support of IS – words, too, that drive the hate and brutal atrocities that define the Islamic State.

If we can no longer remain morally blind to the actions of the IS and its supporters, wherever they may live, then we can no longer, either, remain deaf to the words that, in their arsenal of hate and violence, form perhaps the most powerful weapons of their jihad.

But the West happily accepts propoganda spewed by Pakistan against India and continues to sermonize India.

When I first saw the subject line, I naturally thought that I was about to read the rantings of yet another "pig/monkey-spewing" mullah...suffice it to say that I was actually amused at the fact that such verbal sputum had legs amongst the culturally blind haters!!! In my time, I've read some highly volatile and infectious garbage, but this one simply proves that there is no bottom to the septic tank of hatred. Stephen Strachan, York, PA, USA

ISIS looks horrible because it is horrible

Neither Israel nor any country in the West are capable of the atrocities committed by the IS Caliphate hordes . The supporters of the Islamist hate mongers believed the anti-Semitic tirades of Judeophobes as well as all the self hatred of cultural relativists and cannot believe their eyes now when Islam shows its real face .

how about the Jewish Isis, in the 40's Irgun terrorist organization and others...they had jewish jihadists from more than 40 different countries...

No, it's not confirmation

RIchard, you either did not read the piece or don't understand it. ISIS is NOT a Jewish plot, and it is not created either by the US or Israel.