When I first glanced at the headline on today's Jerusalem Online and reports in the Jerusalem Post and other Israeli newspapers, I thought they must have been a satire: "Washington officials have told Egypt that the US will guarantee Israel's commitment to any agreement signed." But it was not a satire. This was deadly serious, confirmed by other Israeli newspapers and sources in Cairo. 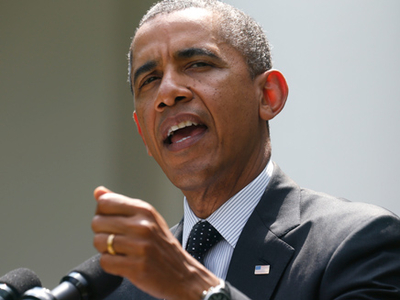 The US offering to Hamas to "guarantee" Israeli commitments to any agreement signed? As if anyone needed proof of the Obama administration's antipathy to Israel, here it was in black and white. If any party needed a commitment to enforce its agreements in any deal, it would have been Hamas, which has been known to break every commitment it ever made. To pick just a few at random:

And at the same time, it should be noted that President Obama personally signed an official letter at the time of the 2012 negotiated ceasefire to Prime Minister Benjamin Netanyahu that the US would provide Israel with the technology to defeat and stop Hamas smuggling of weapons. But subsequent to that promise, Hamas soon received in massive quantities from Iran, Sudan, and North Korea. That promise was never carried out.

Israel, on the other hand, meticulously fulfilled its part of the bargain by significantly relaxing the blockade on Gaza, allowing tons of previously restricted cement and steel into Gaza, increasing the number of daily truckloads of food, medical stuff and building equipment through the two Israeli checkpoints into Gaza by more than 250 truckloads ( a commitment that continued during the Hamas war against Israel, a fact mostly ignored by the mainstream media blindly committed to the Hamas narrative that Israel was the aggressor).

Remember when Obama spoke to the annual AIPAC conference a few years back and ceremoniously declared, "I got your back"? This is the same president who, as the Wall Street Journal disclosed last week, personally held up the Israeli request for additional Hellfire missiles that it had depleted in its war with Hamas.

And in the current round of negotiations being held in Cairo now, according to leaked details in Egyptian newspapers reported by today's Jerusalem Online

It should be noted that even during the recent murderous war waged by Gaza, Israel opened up its borders to treat wounded Gaza civilians in Israeli hospitals and continued to supply more than 500 tons daily of humanitarian assistance and food to Gaza daily, even as Hamas launched thousands of rockets and attempted mass murder of Israeli civilians, fortunately thwarted by Israel, to infiltrate dozens of fully armed Hamas terrorists into Israel via the tunnels dug by Hamas.

And what did the Hamas commit to?

That was it. Virtually the identical commitments it agreed to in December 2012. Quite interestingly, Hamas insisted—which Israel did not agree to—to the immediate opening of a Gaza seaport and airport. But the party that suggested to Hamas that they insist on these demands was none other than the Qataris, the country—the top financial patron to Hamas, the Muslim Brotherhood and many of its terrorist offshoots—curiously selected personally by Obama to be the official diplomatic interlocutor in the Cairo talks. The role that Qatar was supposed to play was to convince Hamas to make concessions. But the opposite happened. Qatar, the country to which that the US just sold $11 billion worth of military weapons, actually sabotaged the negotiations. So far, the president has been silent on this betrayal.

In light of the fact that Hamas has never upheld any of its past commitments, the salient question that has to be asked is why did Obama feel compelled to assuage Hamas with an assurance that the US would "guarantee" that Israeli upheld its commitments? The word "guarantee" has a rather expansive and vague latitude for definition. The most recent demonstration of an American guarantee that Israel would halt its defensive war against Hamas was the suspension of critical military deliveries to Israel during the height of the conflagration instigated by Hamas.

Indeed, for all the public affirmations made last week—after the WSJ expose-- by the Obama administration that the U.S. was "totally committed to the security of Israel," Obama suddenly decides to make a promise to Hamas—whose covenant differs not one bit from the fascist radical Islamic doctrine adopted by ISIL—that it would enforce the commitments made by Israel, which in fact have historically been studiously upheld by Israel.

If Obama was truly sincere in his now obviously contrived promises to "watch [Israel's] back," he would have offered to guarantee Hamas commitments, a terrorist group that has repeatedly violated its commitments in previous agreements. But with his statement that he would "guarantee" Israeli commitments and not those made by Hamas, the president has revealed his true colors for everyone to see.

Steven Emerson is executive director of the Investigative Project on Terrorism (www.investigativeproject.org), a non profit group that investigates the threat of radical Islam, author of 6 book on terrorism and national security and executive producer of the award winning 2013 documentary "Jihad in America: The Grand Deception" (www.granddeception.com)

So many words castigating Obama. Certainly he was a disappointment to those who elected him, because in many ways he simply pursued the policies of his predecessor.

Despite the hostile comments, the same is true of his policy towards Israel - the bottom line being the $3.5 billion handout the US gives Israel each year.

When President Obama said that the US has Israel's back he forgot to add the words 'as long as Israel does what I dictate'.! Judging by his misjudgments re the Middle East it should be obvious that the President has not learned from any of his multitude of errors in the region. Countries that were previously friendly to the West have joined those of radical Islam because of Obama's miscalculations. He and Hillary pushed for the overthrow of Mubarak of Egypt and then his successor, Morsi of the Muslim Brotherhood was elected - then removed for his Islamicist views. Obama and Biden said that al Qaeda was dead yet ISIS has grown out of al Qaeda. Time for the President to stop being the advisor to others and to concentrate on reducing the damage he has done to the U.S. domestically. Following the not completely success of the first World Trade Center bombing,Emerson predicted the second one and, sadly, he was right. Time to listen.

Emerson is full of *it!

Geez... if Emerson actually read the article understood what was said, all it says is that the United States stands behind what Israel commits to. The US is not telling Israel what to do. The US will let Israel decide what to do and we'll stand by them.

Go read the article. The link is in the first sentence. If you can get past your hatred for the president you will see that there is nothing nefarious about the statement.

Emerson is a hater looking to stir the pot. Judging from some of the comments, he succeeded in stirring the emotions of those who didn't read the article. If you educate yourself, you might find that most of the (not all of the time) the official U.S. policy is reasonable and not what the haters are saying.

Remember, Emerson was castigated by the administration for getting the Boston Marathon bombing news wrong. I'm sure he's not holding a grudge!

Twice, I voted for Obama, I had no choice in the matter as I could not stand the Republicans who were running against him.

Although I consider myself to be liberal, I am not far left, more like I'm slightly more left than right.

President Obama has turned out to be a disappointment regarding Israel. However, it is Congress that has held back the money that is required to slow, if not stop, ISIS. Congress has prevented the president from accomplishing ANYTHING because of their bigotry; they simply have refused to accept that there is a Democrat in the White House that is black.

However, I do agree that POTUS has become too wishy-washy on many fronts including Israel. Islam has neither ethics or morality. It is beyond time that POTUS defecates or gets off the facility.

Obama is like a Merry-Go-Round, he is for Israel, then against, for, then against. He is a pathalogical liar who believe's that is is fooling us or that we don't remember his past speeches. He lies so much he doesn't even know when he is contradicting himself. I don't see how anyone could trust anything this man says. Besides that, he has no right to "guarantee" anything that has to do with another country.