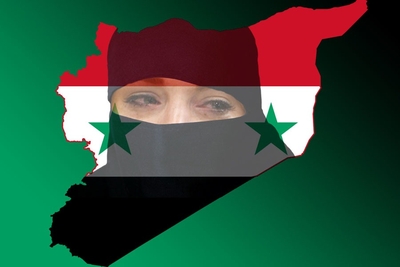 Like many girls her age, 15-year-old Moezdalifa El Adoui left her family's home on a summer afternoon without stopping to say goodbye. But unlike other teens, she wasn't going shopping or meeting friends downtown. The Dutch-Moroccan girl with the sweet warm smile was running away for Syria, to join in the jihad.

The moment they noticed she was gone, her parents phoned the police and her brother spread the word on Facebook. The next day, June 22, Moezdalifa was stopped at the airport in Dusseldorf, from where she planned to fly to Turkey and – like thousands of other European Muslims before her – to cross the border into Syria.

It is hard to imagine a 15-year-old girl, raised in the luxury and opportunity of Europe, running away to join an insurgency abroad, choosing to exchange friends and family for a life on the battlefield of a violent civil war. But over the past year, more and more underage European girls have headed off to Syria to take part in the Islamist uprising. Some go with boyfriends; others, like Moezdalifa, are lured by promises of a better life and lifelong romance once they arrive.

Indeed, according to Janny Groen, a reporter for Holland's Volkskrant, Moezdalifa was one of a group of several girls from the Netherlands all planning to make the trip.

They were by no means the only ones: around the same time, for instance, 16-year-old twins Salma and Zahra Hulani slipped out of their parents' Manchester, England home in the middle of the night, also for Syria. And in April, Samra Kesinovic, 16, left home in Vienna with her friend Sabine Selimovic, aged 15. Austrian officials, reports the UK's Mail Online, now "believe that the pair are in a training camp and are not only already married, but also already living in the homes of their new husbands." Both girls, daughters of (Muslim) Bosnian refugees, were born and raised in Vienna.

All of these seem to be part of a new campaign by ISIS to recruit Western Muslims. "The self-proclaimed Islamic State, formerly known by the acronym ISIS, is actively recruiting Western women and girls," according to the Daily Beast. "And in the process this 'caliphate' that now occupies large swathes of Syria and Iraq is showing, once again, that it's almost as shrewd with social media as it is ruthless on the battlefield."

It is perhaps tempting to wave off such disappearances with a "you know how kids are," or observe that other kids in the 1960s, say, also ran off to join a "revolution" – usually to London or to Berkeley, Calif. But those girls were running away from a culture of war; these are running to its front lines. The first wanted peace, equality, universal love. These girls seek conquest. The children of the '60s imagined "no religion." The children of the jihad imagine only one.

Even so, much of what motivated '60s teens to join the hippie movement is still part of what stirs even underage Muslims in the West to join the extremists in Aleppo. Dutch adolescent psychiatrist Carla Rus, who specializes in treating Muslim girls, notes that their age makes them especially vulnerable to manipulation by recruiters. "They are already turning, because of puberty, against their parents and their society," she observed in a recent e-mail. "Some of them may also be smitten with a jihadist boy, and easily sucked in by his ideology and ideas. Or they may have problems at home, where they get little attention."

Problems at home can be a particularly influential factor for Muslim girls, who are frequently overlooked by their parents in homes where sons are king and where they are often repressed by parents and by brothers. The girls' urge to break free from their families, coupled with a defiant attitude ("I'll show them") and a wish to prove themselves as worthy also make them easy prey for recruiters – many of whom they encounter in local mosques (as the Austrian girls did) or online.

In Moezdalifa's case, one of her friends told Dutch newspaper NRC Handelsblad, the contact came through Facebook, where two Muslim women from Belgium assured her that, "In Syria she could have a perfect life and get married." Others are specifically targeted by young men around their own age, like 18-year-old Dutch-Moroccan Oussama C, alias Abou Yazeed, who was arrested in June in The Hague just days before Mouzdalifa disappeared.

And ISIS jihadists reportedly have recently released English-language videos aimed at encouraging Westerners to join them. "All my brothers, come to jihad," says one, according to an NBC News report. "Feel the honor we are feeling, feel the happiness that we are feeling." A similar video, created in Dutch, received 57,000 hits in its first day.

Tragically, Muslim parents in the West have been sounding the alarm for well over a year now, warning of recruiters targeting underage youth. In the Netherlands, at least one father filed suit against the Dutch intelligence agency for failing to address the problem.

Now, with a reported 3,000 Europeans having joined Syrian jihadist groups, officials are cracking down. Dual Dutch citizens can lose their Dutch passports, for instance; and in early July, EU leaders announced a "confidential action plan" to address the problem, with measures that include passport confiscation and international arrest warrants.

But for girls like the Halane sisters, you have to ask yourself if this is really the right answer. What happens when reality reaches these girls, when the thrill and the romance are over, and they find themselves trapped in a marriage to a Muslim extremist, living in a foreign land, subjected to the violent oppression of Sharia law? Arguably, as dual citizens, such girls still have someplace to go, but most carry passports for Turkey or Morocco, where conditions are deteriorating – especially for women. And how do you tell a child of 15 that she can never come back home, just because she believed in something that turned out to be a lie? Do we refuse these young girls – and their future daughters –because they may pose a danger to the West, or provide the safe haven they (inevitably) will need?

These are questions we have never had to face with any other war, but as the Syrian battles keep raging, and as Western girls continue to join Syria's Islamic jihad, they are questions to which we will soon, urgently, need to find the answers.

they are attracted to these killers because they are evil at heart, even though they are young.So let them suffer with extremist pigs when the excitement wears off. I have no sympathy for them.

And why are these twisted minds being stopped from leaving Europe?

If they stay back, they will resort to violence in Europe. Would it not be better "good riddance to bad rubbish"? Just don't let them come back.

NO civilians in JIHAD

male or female, old or young)

when the enemy has surrounded the Muslims (0: on every side, having entered our territory, even if the land consists of ruins, wilderness, or mountains, for non-Muslim forces entering Muslim lands is a weighty matter that cannot be ignored, but must be met with effort and struggle to repel them by every possible means.

Good article, up to the point when you started waving the victim card for these girls. They go to Syria etc to kill people. You are saying "Now that you have killed a few Christians and you want a bit of a rest, pop home and we'll welcome you". Europeans have enough killers of our own without importing trained ones, thank you very much. WE DON'T WANT YOU BACK HERE so you can practise you killing skills when you get bored!

I wonder if any of this involves the allure of the "bad boy". It has just progressed from the one who smoked cigarettes and drove motorcycles to the drug dealing pot smoker and now to the AK-47 toting decapitator.