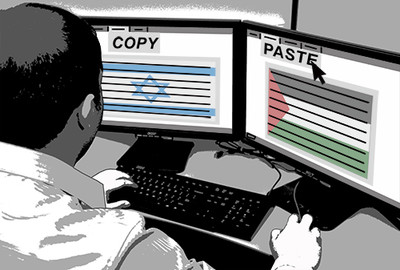 The Israeli and Palestinian media recently reported the bodies of dozens of Palestinians buried in Israel throughout the decades of anti-Israeli terrorism had been exhumed and transferred to the Palestinian Authority. The festive – if overloud – ritual that the Palestinian establishment carried out every time Israel returns the bodies of their murderers is curious, to say the least. After all is said and done, according to Islamic religious law, the dead are buried where they die, even if they die on a pilgrimage to Mecca. Exhuming bodies and transporting them elsewhere is considered desecration and lack of respect for the dead.

The latest example came Sunday, when Israel gave the remains of 18-year-old Ayat al-Akhras to the Palestinian Authority for burial in Bethlehem. In 2002, Akhras killed herself and a grocery store security guard who saved countless other lives when he stopped her from entering the Supersol market.

The Palestinians spent decades without even feigning interest in dead terrorists, but recently pressure has been exerted to transfer their bodies to the Palestinian Authority. What changed? Why is it so important for the Palestinians to take possession of the bodies of terrorists buried in Israel who killed and maimed thousands of innocent Israelis? What changed decades of lack of interest in rotting graves? Until now, there was never any serious attempt to negotiate for the return of forgotten terrorists who were sent to murder Israelis and died in the process.

The answer can be found in the Palestinians' observation and study during their years in Israeli jails. Some of the prisoners who were released, in one deal or another forced on Israel, today have important positions in the Palestinian leadership and know they can copy Israel as the model for a successful state, that they can use Israel as a template to promote the Palestinian project. The better educated among them spent their prison terms carefully studying the biographies of Israel's founders, the narrative and symbols accompanying its establishment, how it achieved its final form and became powerful.

They changed the identity of the Israeli symbols into milestones along the winding path of the Palestinian narrative. Most of them were student activists and signed up for Open University courses, a privilege given them by the "oppressive Israeli occupation." Strangely enough, the most popular courses were related to Zionism and the Jewish people.

One of the themes distinguishing Israel is how it relates to its prisoners and fallen. It is a part of the Israeli ethos related to the ancient Jewish religious practice of the redemption of captives. It is also a tenet of the IDF's moral code not to leave dead or wounded Israeli soldiers in the battle arena. Another Jewish practice of great importance is giving a Jew a proper funeral according to Jewish religious ritual. Such ideology helped shape the Jewish people throughout their history, both as a sovereign nation and in the Diaspora, and certainly since the establishment of the State of Israel in modern times.

The State of Israel has often paid the high price of releasing terrorist prisoners to receive even the dead bodies of IDF soldiers. For example, after a 2008 deal with Hizballah, Hassan Nasrallah boasted he had body parts of IDF soldiers and was willing to barter them. It was clear to the objective observer that Israel's concern for the bodies of its soldiers was greater than its enemies' concern for the lives of their own men.

As time passes it becomes more and more obvious that the Palestinians learned from Israel that the return of the dead causes the country to close ranks. They are exploiting the theme to foster social solidarity and reinforce the idealization of martyrdom and sacrifice. In an attempt to win the same kind of support the Israeli government receives when its prisoners are released and its dead are buried in their own country, the Palestinian leadership is attempting to make political capital from the release of terrorists as part of the peace negotiations with Israel.

Now, after years of neglecting both the living and the dead, and inspired by Israel's legacy, these Palestinians proclaim the issue of dead terrorists a new national theme. In the foreseeable future, it will be integrated into the ideological indoctrination of children (and adults) subjected to the propaganda machine that serves Palestinian terrorism and its death industry of shaheeds.

The Palestinian leadership is attempting to turn a rabble of internecine terrorist organizations into a political entity groping its way towards a uniform identity and common narrative which will help it meet the international criteria of a "people" as understood by the civilized world. The coffins are draped in flags to lend them the air of fallen soldiers instead of calling them terrorists who died blowing up innocent people. In the same way the Palestinians hijacked the term "resistance" from the French to make the deliberate and indiscriminate mass murder of non-combatants acceptable to Western ears.

The festivities held in the streets after the release of Palestinian prisoners are also an expression of their intense Schadenfreude, and cause great pain to the victims of terrorism in Israel, especially the families of Israelis murdered by the terrorists who are released. The Palestinian families who receive their relatives' bodies are used by the Palestinian propaganda machine, which is working day and night to stock its arsenals with potential shaheeds who will murder Israeli civilians and glorify death and self-sacrifice.

Palestinian Authority President Mahmoud Abbas has enjoyed great support from the release of terrorists from Israeli jails and the return of bodies. He represents himself as concerned about the dead as well as the fate of living prisoners."

The Islamic religious tradition, however, gives more importance to the survival of the soul of the shaheed and less to the burial of his body. Palestinians who carried out terrorist attacks against Israel have often said that the shaheed does not die; he lives with Allah who tends to him and his welfare. They have also said that when the graves of the shaheeds are opened, their eyes shine and their bodies are whole. According to the shaheed concept, the laws of nature, such as the dissolution of the flesh after death, do not apply, their bodies do not rot. If they were blown to shreds they will become whole in the grave and their bodies will give off a musky odor that will pervade the entire village.

A suicide bomber caught by the IDF before he could carry out an attack said he put a bottle of perfume in his pocket for insurance, to make sure his body parts wouldn't smell after his death. According to Islamic religious ritual, the bodies of shaheeds are not purified after death; they are not washed, but are buried in the clothes in which they died rather than in shrouds. The world waiting for "the living shaheed" is pleasant for both soul and body. They conceive of the future promised them in paradise as actually existing, and that motivates the younger generation of terrorist recruits to carry out suicide bombing attacks.

Israel recently delivered to the Palestinian Authority – almost in secret – the bodies of 36 terrorists who had murdered and maimed Israeli civilians. The Israeli authorities felt it was necessary, not because of an Israeli-Palestinian dialogue or even the "peace" negotiations, but because of a ruling of the Israeli Supreme Court, which had received pleas from the Palestinian families. Although it was prompted by a court decision, this delivery is still perceived as a gesture to Mahmoud Abbas and another phase in the release of Palestinian terrorist operatives, bowing to pressure exerted by John Kerry. In 2011, the Palestinian Authority received 84 bodies and the following year 91 bodies; 80 went to Ramallah and 11 to the Gaza Strip.

As part of the Palestinian national ritual currently being established along with all the other trappings of "statehood," the bodies were delivered to the Palestinian Authority in coffins draped with the flag of "Palestine." It was as though they contained the bodies of soldiers being returned home, although Israel tried to conduct the transfer in a strictly judicial atmosphere. There are two sides to the story. One is the appeal that Palestinian families lodged with the Israeli Supreme Court, which indicates a kind of recognition of the government of Israel. The other is the Palestinian Authority's frequent and flagrant use of Israel's democratic institutions in the war it is waging against Israeli civilians. There are also those who claim that, in any case, Israel wanted to get rid of the terrorists' bodies and it was convenient to say it was forced to do so by the Supreme Court. It may also have been a way for the government to avoid facing the families of the terrorists' victims.

The Palestinians far prefer to receive live terrorist prisoners rather than bodies. The live ones praise Abbas to the skies, and as opposed to the dead, their social status improves and they can return to carrying terrorist attacks against Israel. Some of them enjoy taunting the Israeli families whose relatives they killed. For example, Ahlam Tamimi, the woman who escorted the suicide bomber in the Sbarro restaurant in Jerusalem in 2001, was released in the Gilad Shalit prisoner exchange. She now hosts a talk show in Jordan.

The fact that American officials are pushing for the release of the Palestinian terrorists is surprising, since America tends to imprison its own terrorists as far away as possible in Guantanamo, and indulged "extraordinary rendition," that is, sending them to other countries for "interrogation." They do not negotiate with terrorists, not even for the release of American prisoners of war.

Thus the Palestinians learn from and imitate the milestones of Israeli Zionists, adopting and distorting symbols and events from the Jewish people's return to their homeland. They fuel their war, propaganda and terrorist machine by glorifying terrorists as heroes to a state they have yet to achieve.

Two sides to a story

Dr. Berko: You might want to read (if you have not already done so) and comment on Dr. Anne Speckhard's book "Talking to Terrorists." Best wishes, Billie H. Vincent Author, AVSEC, C-T, ATC/ATM