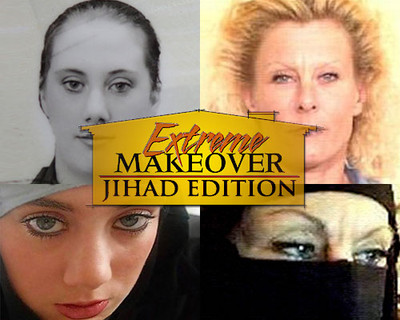 In a photograph, the girl looks back with casual curiosity, her face scrubbed, her hair pulled a bit untidily behind her ears, her collar crisp, her tie askew, a charming and timeless portrait of the young Catholic schoolgirl in her teens.

Barely more than a decade later, she is called the world's most dangerous woman, the Muslim terrorist known as the "white widow," thought to have helped mastermind last month's terrorist attacks in Nairobi in which 72 people, including several children, were massacred in a popular shopping mall. Some reports placed her at the scene, commanding others as they gunned down dozens off non-Muslims over a three-day period. (For more on Lewthwaite, click here.)

If the allegations are true, then Irish-born Samantha Lewthwaite, whose husband Germaine Lindsay was among the suicide bombers responsible for the July 7, 2005 terrorist attacks in London, is by no means alone among violent women converts to Islam. Last May, Michigan-born Muslim convert Nicole Lynn Mansfield became the first American to die fighting with the Syrian rebels opposing the Bashar al-Assad regime. And in 2005, Belgian convert Muriel Degauque blew herself up in a suicide bombing outside of Baghdad. Other examples include Jamie Paulin-Ramirez and Colleen La Rose, better known as Jihad Jane – American converts convicted in 2010 in connection with a plot to murder Swedish cartoonist Lars Vilks for "insulting Islam" in his drawings of the prophet Mohammed as a dog; and Canadian Amanda Korody, charged with her partner John Stewart Nuttail, with "conspiracy, facilitating a terrorist activity and making an explosive device" in a failed attack on the British Columbia legislature on Canada Day last July.

This is just a sampling.

It should be said up front that while the vast majority of converts to Islam are women (in the UK, officials say women comprise about 75 percent of the 5,000 people who become Muslim every year), radicalization among them is rare, and violent attacks – or plots to commit them – rarer still . But the numbers are growing, reports the Christian Science Monitor, and becoming an increasingly worrisome phenomenon.

The attraction of Islam to Western women is not new. Experts have repeatedly noted common patterns among female converts, most of whom convert because of a relationship to a Muslim man, as was the case, say, with Katherine Tsarnaev, widow of Boston Marathon bomber Tamerlan Tsarnaev. Others seem to find respite in the trappings of Islam. According to Dutch psychiatrist Carla Rus, who frequently works with Muslim women and converts, they are attracted less by the religion itself than by the costume, claiming that "covering up" under an abaya or niqab allows them to escape from a sexualized Western culture in which, they say, women are too often perceived as sex objects. (That the entire purpose of these coverings in Islamic culture is based on the premise that women are nothing but sex objects is a nuance that, evidently, escapes them.) They find, too, comfort in the notion of clear rules for women, a definitive set of guidelines by which to organize their lives in a post-feminist West where women's roles remain, in many instances and circles, ambiguous.

"The Bible can be vague about the roles of men and women," a woman called "Saskia" told a reporter for London's Standpoint magazine in 2010, "and I wanted certainty. Islam gave me that."

But the journey from hijabi to terrorist is another matter, more complex and less easily explained. Research I have reviewed shows that, in many cases, the women are pressured by their partners, as may have been the case initially with Samantha Lewthwaite (whose husband was also a convert). Muslim husbands and even the Muslim community at large may question their suitability and devotion: it is not unusual for a female convert to be told that she is "not a proper Muslim wife." Consequently, whether out of a need to please or to prove her mettle, for some women the response is simply to travel deeper into the orthodoxy. They may raise funds for jihad, or assist in recruiting male jihadists – or, as is the case with some of the female members of the Dutch radical Hofstadgroep network, join in the sitting-room gatherings of their radical husbands and lovers, absorbing the discussions – and the beliefs. Such activities can even influence women born into Islam; but for converts – especially those who either are eager to prove themselves, are too naïve and uninformed to know better, or both – they pose a particular danger.

It is, in fact, especially that lack of knowledge, according to many experts, that can lead down the path to radicalization, as much among women as men. Jolande Withuis, a Dutch researcher who has written prolifically on the subject, points out that for many of the radicalized women, the desire to know more about the Quran and its teaching leads them to the Internet, where they land in Salafist online communities eager to embrace them into their world. For a jihadist recruiter, after all, nothing provides a better foil than a Muslim woman who does not look as if she's Muslim – someone, say, like the blonde and blue-eyed Jihad Jane.

Those recruits are also among the most effective, according to French Islam expert Olivier Roy, who in 2006 told the Washington Post, "For al Qaeda, converts are not just tools to get past security. It's a way for them to become a global movement."

But if the growing number of radicalized female converts to Islam is disturbing, at least as troubling is the absence of any real effort to combat it, both from within the Muslim community and from without. This seems especially true in the United States, where it would appear that the threat is becoming particularly acute. Nicole Mansfield's father, in fact, claims he contacted the FBI about his daughter long before she left for Syria; and while they followed her for a time, nothing ever came of it. "She'd go make U-turns," Gregory Mansfield told the Detroit Free Press, "They'd make U-turns. She'd pull into a parking lot, they'd pull into a parking lot."

Eventually, Nicole Mansfield contacted the Council on American-Islamic Relations (CAIR), who – rather than investigating the situation – ordered the FBI to back off. Now, says Nicole's father, CAIR has told him and other family members to avoid the FBI completely.

Meantime, the 33-year-old Nicole, like the 38-year-old Degauque before her, is dead, leaving an 18-year-old daughter behind, alone. And Samantha Lewthwaite is still at large, awaiting, plotting, her chance to kill again.

Nuts Looking For A Purpose

Uneducated western females are particularly vulnerable to any cause that validates their lives...primarily, those with some type and degree of mental or emotional illness. Most cases, these particular women find validation via romance and marriage. Although this demographic composes a small percent of uneducated western women, they pose a greater threat to society than any other demographic because western society does not expect affiliation with middle eastern cultures...the product being, "Sucker Punched". Regardless of ratios, these exceptions can be sufficient to create heavy casualties. Middle eastern radical ideologies are more than a movement; they are the munitions of any and all loose canons. And what more dangerous loose canon could there be than the canon that denial refuses to recognize ? So the $64 question now is, how does the west screen to recognize this anomaly ?