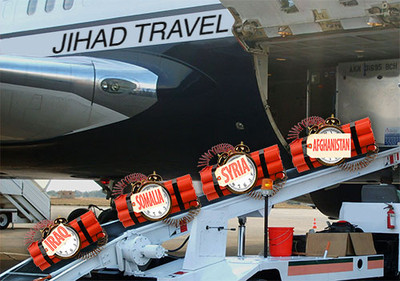 For 20 years I studied and interviewed Islamist mujahedeen (jihad fighters) imprisoned in Israeli jails, examining their inner worlds and discovering the obsessive thoughts leading them to carry out terrorist attacks. They were addicted to fantasizing about an alternative reality, describing their compulsions in metaphors similar to those used by obsessive gamblers and drug addicts. They likened them to "worms" (duda in Arabic) burrowing into their brains and driving them to seek not another game of cards or a fix, but dead Israelis, Americans, Europeans, or anyone else they considered infidels. They did not try to resist their compulsions or consider that their actions might be wrong, because they felt completely controlled and manipulated by the concept of jihad, which dictated their behavior in every sphere of life.

The findings of my research indicated that the jihadists' obsessions created what are known as "overvalued ideas," that is, false or exaggerated beliefs sustained beyond reason or logic. One often repeated, was the vision of what awaited the shaheed (a martyr for the sake of Allah) in the Islamic paradise after death. The sensations of the release of tension and relaxation come only after the terrorist act, when the perpetrator looks at the people he murdered. Even suicide bombers whose explosive belts failed to detonate or who were arrested before they could carry out their missions described a transcendent sensation, a smile as they approached their targets.

They spoke of their inability to control their impulsive behavior, harmful to themselves and others.

They described the mujahed's [the jihad fighter's] search for meaning in his life, how he turns his back on civilization and everything it represents. Many of them felt rejected by their immediate surroundings, either because of feelings of inferiority, marginality or guilt for things they had done (or not done) that brought dishonor to their families, or simply because they could not integrate into society as productive, contributing citizens. Those who had been exposed to Western society had strong feelings of inferiority, jealousy and rejection, especially because of differences in life styles, sex roles, confidence and other personal attributes. Some of them noted unbridgeable gaps between culture and science. One dispatcher of suicide bombers spoke of the great differences in capabilities, culture and economic condition between Christian and Muslim Arabs. For the mujahedeen, people are either good or bad, and that conceptual polarity directs their course.

Terrorists are also frustrated and alienated by those who rejected them, leading them to announce that as mujahedeen they "reject the rejecters." A similar sensation has been noted in criminological studies as a criminal behavioral dynamic, and because the criminal is rejected by a normative society and cannot integrate into it, he declares war on it. Generally speaking, there is no psychopathology among Muslim terrorists. That is, none of them can be diagnosed as having a recognizable mental illness, even those who attempted to carry out suicide bombing attacks. What remains to be examined is whether or not there is a collective pathology, and if it is a question of a society, many of whose members find it difficult to suppress violence and control their urges and anger.

Jihad, a holy war against the infidel, is the personal duty of every Muslim, and if he does not wage it, he will die as a religious hypocrite, someone who only outwardly practices Islam but does not truly believe, and be damned for all eternity. The terrorists I interviewed told me that waging jihad is, for the mujahed, the way to partake of Allah's mercy for themselves and the members of their families, and to go directly to paradise without the Islamic "tortures of the grave" and without undergoing a painful examination by angels before they are allowed to enter.

Exhilaration and ecstasy accompany jihad fighters in their search for arenas of excitement around the globe. They look for places where they can rape and kill with impunity and fight the infidel in the name of Allah, reaching the pinnacle of masculinity and honor reserved for the shaheed. Superficially, they may seem to be fighting for an ideal, but in reality, even in suicide bombing attacks, there is an element of desire for reward, both in this world and the next. The overwhelming desire of many Muslim adolescent boys, even those educated in the West or who are converts to Islam, especially those living in countries where there is no real governance, is excitement. To that end they stream into confrontation zones like Afghanistan, Pakistan, Chechnya, Libya, Iraq, Africa (such as the recent terrorist attack in Kenya), and Syria to experience the mission, the excitement and promise of being a shaheed as the ultimate in self-realization.

Frustration, alienation and a sense of inferiority accompany the increase in the pace of modern life, and the gap between East and West continually grows. The deprivation, restrictions and solutions imposed by Islamism lead people to seek a group to which they can belong and which will help them channel their negative feelings for the other, the different, the "infidel," feelings which are common to all. In addition, the need for adventure and excitement has helped create a kind of "jihad tourism" especially but not exclusively relevant for young Muslim men, including those born in the West. Today in Syria there are jihadist fighters from 60 countries, among them converts to Islam, who star in videos and help the jihadists recruit supporters and spread propaganda. Jihad tourism is a subculture of fun and excitement, a festival of violence, similar to the Western criminal and gang subcultures. The jihadist lifestyle allows them to shake off the confines of the disintegrating patriarchal family. As opposed to ordinary criminals, whose social status is lowered when they are classified as felons, the Islamic terrorists feel they are performing good deeds for the sake of Allah, raising their status. They act on violent impulses, are unrestrained in their aggression and try to impress those around them by taking risks, hoping for admiration and praise. They butcher people of all ages, use both sarin gas and hatchets, behead, rape and mutilate their "enemies" with no regard for the fact that until recently the enemy was a neighbor, or at least shared their language and culture.

In their "extreme jihad journeys" they become accustomed to violence and atrocities, or as one of the men I interviewed said, "we find the smell of blood natural; even as young children we saw sheep being slaughtered in our yards." In addition, they receive religious justification from various fatwas, religious edicts issued by sheikhs such as Yusuf al-Qaradawi, the Muslim Brotherhood's religious authority. The jihad tourists live like wandering adventurers, generally finding it difficult to integrate into the mainstream of modern life. Instead they choose a path of murder and violence while embracing simplicity and even primitiveness. Having different aspirations, they do not have to compete with the West, seeking instead to destroy it while hoping to recreate the past in preference to joining the future. Before he was killed by the Americans, the terrorists I interviewed often praised Osama bin Laden and the simple life he lived in the caves of Tora Bora – an illusion, because bin Laden lived a life of relative comfort in Pakistan.

The waves of jihad tourism and terrorism targeting mainly Christians and Jews in the West have spun out of control and are not susceptible to the restraints of family, culture, religion or society. Violent jihad tourists are now overwhelming entire countries: Afghanistan, Pakistan, Iraq, Yemen, Libya, Tunisia, Egypt and Syria. The atrocities currently being committed in Syria would not embarrass any legendary serial killer, and there are thousands of such jihad tourists there, Sunni and Shi'ite, and even Western converts to Islam, who torture and kill innocent civilians.

It is the high season for jihad tourism, and while the mujahedeen continue their activities in Iraq, the trendy watering hole is currently Syria, where Bashar al-Assad's friends and foes alike indiscriminately slaughter innocents of all ages and sexes. They surf on waves of blood, and the operatives of the Al-Nusra Front, a group affiliated with Al-Qaeda, slaughter both members of the Assad regime and of secular rebel organizations who fighting the same regime.

The goal of Western educational systems is to provide the tools necessary for functioning in society. In the Islamic countries, however, children are taught from infancy that the family and clan are the foundations of their lives and dictate their behavior. Islamic society binds its members in chains, and the individual has no choice but to submit to group pressure. Drowning in blood and violence, his only justification is seeking the death of a shaheed.

And recent conflicts show that the West provides plenty of jihad tourists despite our education and opportunities. For some, especially converts to Islam, waging jihad in foreign lands can be exciting and revolutionary and a chance to prove the depth of their new devotion.

With all of this in mind, I would like to propose calling murder for the sake of Allah "shahadamania," which might make it easier for the West to understand and fight the syndrome. It refers to the obsession for istishhad [martyrdom for the sake of Allah] and includes feelings of transcendence and euphoria after killing the infidel, the capitulation to instinct, the inability to function in daily life, and jihad as a good and even altruistic deed in this world to qualify for a hedonistic afterlife.

Wouldin't shahadamania just mean a mania for repeating the shahada, rather than for becoming a shaheed?

Somewhere there is a hidden hadith which describes the rewards of the shaheed in paradise. One of which is, doubtless, that those who persecuted the Muslim for his beliefs, the one's he killed during his martyrdom; will spend eternity watching him enjoy his reward for faithfulness.

If the Muslim is a true martyr - one killed for his beliefs, then this is just. If, however he has violated the holy Qu'ran by killing innocents or other Muslims; then it is those innocents who constantly watch over him. Each time he attempts to find pleasure with one of the virgins, it is their reproachful gaze that causes his member to fall flat. Every time he tries to eat of the unlimited banquet or drink from the flowing streams of sweet intoxicating beverage; it is those same innocent eyes that cause the food to taste like animal excrement and the wine to only whet further his thirst.

One may fool oneself about the real motivations for and consequences of one's choices; but Allah is not deceived.

If only those seeking that false path to paradise understood what sort of Hell awaited them; they would flee, the way one does from Shaitan, from the drug pushers who sell "The Infidels ate your homework." to ensnare them to their destruction and the destruction of Islam.

This is no 'Research' its nothing but 'Pure Propaganda', but then what can one expect; truth?