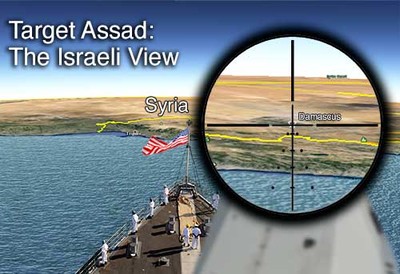 A vital debate is raging in the United States over a key question: Does the Assad regime pose a greater threat to international security than the radical Islamist elements fighting to topple the Syrian dictator? And how would a military strike alter the balance?

As Congress debates the merits of military action in Syria, concerns are being raised by some observers that hurting the Assad regime could strengthen the al-Qaida-affiliated groups, thereby doing more harm than good to regional and global security.

During these tumultuous and chaotic times in the Middle East, it is more difficult than ever to assemble and update an accurate, comprehensive threat assessment picture, one which takes into account both near and distant dangers, and which can distinguish between security problems based on their level of severity.

There is not one uniform view among Israeli defense experts over what outcome would be best for Israel, in light of the fact that no one can know with certainty what will come in Assad's place.

Most observers agree that from Israel's perspective, the al-Qaida-affiliated organizations in Syria pose a very real and growing threat, but one which is significantly smaller in scope and more easily contained than the threat posed by a far more powerful axis: Iran, the Assad regime, and Hizballah.

This view is based on the fact that the Syrian regime forms a central component in the Iranian bloc. It is this bloc, on the verge of obtaining nuclear weapons, and with access to unconventional weapons and state-sponsored conventional weaponry, that is the No. 1 threat to Israel's security.

Syria is the bridge connecting Tehran to Hizballah in Lebanon. Bashar Al-Assad has brought Syria closer to Iran and Hizballah, and today relies on them for his survival. Assad is facilitating the transit of advanced Iranian arms to Hizballah, as well as supplying it with Syrian-made weapons.

Syria is viewed by the Iranian regime as its critical forward base and springboard to eventual regional domination.

With Syrian help, Iran has armed Hizballah with 70-80,000 rockets that are pointed at Israeli cities. Hizballah's firepower has the potential to paralyze the Israeli home front in a future war.

The most critical threat is the Iranian nuclear weapons program, which is edging forward all the time.

If Iran isn't stopped, Hizballah, and other terrorist semi-states like Hamas in Gaza, could try to attack Israel while enjoying protection from an Iranian nuclear umbrella.

The same pattern can repeat itself on an even larger scale in the future. Iranian-sponsored terrorist networks might attack Western cities with impunity if they are emboldened by a nuclear-armed Iran.

The collapse of the Assad regime would deal a serious blow to Tehran and Hizballah, while significantly improving Israel's strategic situation.

Furthermore, a Syrian regime that is only weakened by a U.S. strike, yet deterred from deploying a chemical weapon again, could in turn deter the entire Iranian network, and give Iran's Supreme Leader Ayatollah Khameini pause before considering further progress on his nuclear program.

According to former military intelligence chief Amos Yadlin,"Iran has all of the capabilities it needs to decide to create a nuclear weapon. The day of the decision could be tonight, when they might choose to break out of the Non-Proliferation Treaty."

If Iran, the world's most radical state – whose leaders have publicly declared their desire to see Israel destroyed – gets hold of humanity's most destructive weapons, the effect on regional security would be devastating.

Sunni Arab countries, made up of Gulf states and secular countries like Jordan and Egypt, are all deeply concerned about the potential of nuclear weapons in the hands of Shi'ite Iran.

It is impossible to divorce Syria's use of chemical weapons from the Iranian nuclear weapons program. The Islamic Republic's Revolutionary Guards Corps is assisting the Syrian army against the rebels, while thousands of Hizballah fighters are in Syria too, fighting alongside Assad's forces.

The Iranian-led axis views Syria as a battleground where it can experiment with unconventional weapons and push the boundaries on international prohibitions against weapons of mass destruction.

An indecisive response to August's chemical massacre in Damascus runs the risk of emboldening Iran and its allies. They in turn will continue in their scheme to emerge as leaders of the Muslim Middle East, acquire nuclear weapons, and confront Israel and the moderate Sunni states.

None of these concerns negate the dangers from a revitalized al-Qaida network in Syria.

Estimates vary about the number of radical Islamists among opposition fighters. The fact remains that jihadi groups are growing quickly there. They make up some of the most effective fighting units, and are thriving in the power vacuum and deadly battlegrounds of Syria.

The jihadi presence in Syria has begun infecting neighboring states too, such as Lebanon and Iraq, and is likely to spread to other territories experiencing power vacuums, like Egypt's troubled Sinai Peninsula, while threatening stable countries such as Jordan. A spillover of terrorists to other lands is inevitable.

While the Sunni radical threat is very real, it is also limited in scope at this time, as far as Israel is concerned.

Small terrorist groups can fire rockets and mortars at Israel, and launch cross-border attacks. But this is a threat the IDF can contain, and for which it has spent many months preparing.

In contrast, a war with the Iranian axis would take on a significantly higher magnitude.

When weighing the extent of the danger presented by pro-al-Qaida groups in Syria, one might also factor in the likelihood that they will be engaged in a power struggle, sectarian warfare, and battles with more moderate elements of the Free Syrian Army for years to come.

This subsequent conflict could hamper their ability to organize serious attacks.

To be sure, the security problem posed by jihadis is no laughing matter. As they continue to raid weapons storehouses once owned by the Syrian army, Israel must think ahead about a scenario involving a raid by al-Qaida on a chemical weapons facility controlled by the Assad regime.

A reality in which al-Qaida is armed with chemical weapons can never be accepted.

But right now, Iran is just a few months away from a working nuclear weapon, should it decide to obtain one. Its ally in Damascus massacred over 1,400 civilians with sarin gas, and its ally in Lebanon stockpiles more rockets and missiles than any arsenal in the hands of most modern militaries.

For all of these reasons, a failure to deter the Iran-Syria-Hizballah axis now could result in a future security deterioration, the outcome of which would be more extensive than any immediate threat posed by jihadis in Syria.

Israel is myopic beyond Iran

The obsession with Iran and the bizrarre thinking that pits Shia vs. Sunni will prove to be injurious to Israel in the future.

Why is Yaakov Lappin ignoring Bernard Lewis's views on MAD?

I agree with the basic premise of this article that the Shi'ite axis is a greater threat to Israel than Syrian jihadis. However, Yaakov Lapin writes: "If Iran isn't stopped, Hizballah, and other terrorist semi-states like Hamas in Gaza, could try to attack Israel while enjoying protection from an Iranian nuclear umbrella."

The problem is that once Iran gets nuclear weapons Iran may, according to renowned scholars of Islam, proceed to use them undeterred. It is Iran, not Hizbollah and Hamas which presents the main threat. Why, just why, is Bernard Lewis's warning "for people with this mindset, M.A.D. is not a constraint; it is an inducement" being disregarded even by Yaakov Lappin?

Why are Bernard Lewis's views on MAD ignored?

A Few Problems Contained in this Article

While trying to show how the Syrian regime is worse than the opposition, you destroy the argument by mentioning the fact that the opposition, who are far worse than mentioned in the article, if they were to get a hold of wmd, would pose as big if not a bigger problem to Israel & others. And, you don't consider that the opposition would use every means to destroy Israel, including making nice with Iran.
The truth is that both sides are totally evil & should be encouraged to do only one thing, completely destroy each other. This is the ONLY effective compassionate solution for the largest number of innocent people in the area.
I'm also shocked to see your words concerning Iran. I cannot believe that you actually believe that anything will deter Iran from obtaining & using nuclear weapons, short of decent countries destroying them.

The implication here seems to be that Israel is helpless and is completely dependent on the United States -- that is on Barack Obama -- for her welfare and her security, though Israel's prime minister insists, that is not the case, but it is apparently the case. Mr. Lappin appears to confirm it is the case. Israel could not topple Assad? More importantly, Obama has made it abundantly clear with his actions to date, by his insipid sanctions, his administration's pressure on the Israelis to trust him (to stand down) and not do anything about genocidal Iran's nuclear program or her threats to annihilate Israel's Jews. If Israel does not act, Iran will join the nuclear club. All else is delusion.