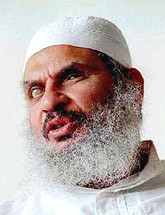 "If these reports are true, such considerations would be extremely disconcerting as release of this convicted terrorist should not happen for any reason," the letter from U.S. Reps. Lamar Smith, Ileana Ros-Lehtinen, R-Fla., Mike Rogers, R-Mich., Howard "Buck" McKeon, R-Calif., Peter King, R-N.Y., Hal Rogers, R-Ky. , Frank Wolf, R-Va., and Kay Granger, R-Tex., said. Each chairs a significant House committee.

The query was prompted by a story published Monday by The Blaze and discussed by talk show host Glenn Beck. A Blaze staffer said an unnamed Obama administration told him Abdel-Rahman's release was being "actively considered."

Abdel-Rahman is serving a life sentence for plotting a series of bombing attacks on New York tunnels and landmarks. And he is considered the spiritual influence behind the 1993 World Trade Center bombing that killed six people. His imprisonment has become an obsession for some in Egypt, with new President Mohamed Morsi promising to lobby Washington for Abdel Rahman's release when he meets U.S. officials.

It was Abdel Rahman's imprisonment, and not alleged offense to an anti-Muslim video, that triggered violent protests outside the American embassy in Cairo last week, U.S. intelligence officials say.

"Succumbing to the demands of a country whose citizens threaten our embassy and the Americans serving in it would send a clear message that acts of violence will be responded to with appeasement rather than strength," said the letter, which was sent to Attorney General Eric Holder and Secretary of State Hillary Clinton. "The blind sheikh should remain in federal prison."

Spokesmen for the Justice Department and National Security Council say that is what is going to happen.

"The blind sheik is going to serve out his life sentence," National Security Council spokesman Tommy Vietor said on Wednesday. "There are no discussions about transferring him. These reports are wrong."

Justice Department spokesman Dean Boyd dismissed the Blaze report as "utter garbage. The Blind Sheikh is not being transferred to Egypt nor is he being released. He is serving life sentence in federal prison. Suggestions that there is discussions to transfer or release him are absolute garbage and completely false."

But the New York Post reports that King, chairman of the House Homeland Security committee, "confirmed the request is being considered."

Andrew McCarthy, who prosecuted Abdel Rahman, told the Blaze he was skeptical about the denials.

"I think the plan has been to agree to the Blind Sheikh's release, but not to announce it or have it become public until after the election," McCarthy said. "That is consistent with Obama's pattern of trying to mollify Islamists. Obviously, they did not want this information to surface yet… but sometimes a situation can spin out of control."

Since it has been confirmed that ex Gitmo residents are waging jihad again, the "progressive" Brown Shirts should keep their lying mouths shut. Not ONE US soldier, marine, sailor, or airman should ever loose his life to a terrorist we already caught, but was released by traitorous politicians. We sacrificed so much to get these guys just so Democrats could release them and then accuse US of some sort of wrong doing while their mujihadeen buddies get promotions and fight the West with renewed vitality. What isn't partisan about American patriots on one side, and the "American left," which is the true right wing, on the side of Muhammed and America's national enemies?

Ian, shove your hypocrisy. The State Department is not only planning to release the Blind Sheik, but half of current Gitmo detainees if Obama is reelected. YOU obviously don't take terrorism seriously, and YOU are "dissapointing." This is the same State Department that is directly funding Al Quaida and the Muslim Brotherhood. They aren't to be trusted, and Hilary's use of the word "should" should say more than a thousand Obama words. This article is as non partisan as it gets, and it beats the heck out of the Huffpo garbage you probably live on.

CNN knew on the day of the protest; this article was written on Sept 14th and link off badblue.

"Just before the crowd in Cairo, Egypt erupted in violence against the U.S. embassy there, CNN's cameras were in the capital interviewing protesters who said that the main purpose for their protest was to have Sheik Omar Abdel-Rahman (known as the 'Blind Sheik') released from a U.S. prison. Yet as soon as the riots began, CNN began to push the false story that the riots were sparked by some low-budget American movie that denigrated the Prophet Muhammad.

The very day before rioters stormed the U.S. embassy in Cairo, CNN's Nic Robertson filmed an interview with a handful of Islamists right outside the U.S. embassy. One of those protesters that CNN interviewed was the Blind Sheik's brother, Mohamed al Zawahiri".

The important facts of a story need to be at the top. The following facts should have been in the first two paragraphs, not seven paragraphs down:

"Spokesmen for the Justice Department and National Security Council say that is what is going to happen."

"'The blind sheik is going to serve out his life sentence,' National Security Council spokesman Tommy Vietor said on Wednesday. 'There are no discussions about transferring him. These reports are wrong.'"

Terrorism is an important issue, one that should be above this kind of petty partisanship. I fully expect Republicans (and Democrats) to use this for political gain, but for a reputable organization such as yourselves to do it is dissapointing.