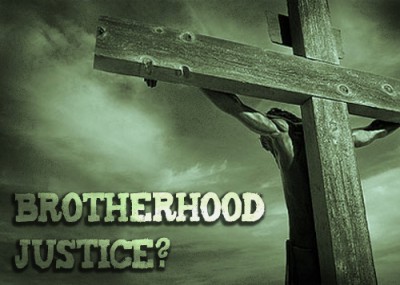 Update: Although the crucifixion was reported in Arab media, which was picked up from Sky News, other reports question whether the attacks took place as described. Columnist Raymond Ibrahim stands by his account.

A Sky News Arabic correspondent in Cairo confirmed that protestors belonging to the Muslim Brotherhood crucified those opposing Egyptian President Muhammad Morsi naked on trees in front of the presidential palace while abusing others. Likewise, Muslim Brotherhood supporters locked the doors of the media production facilities of 6-October [a major media region in Cairo], where they proceeded to attack several popular journalists.

That there were attacks and violence—both in front of Egypt's presidential palace and at major media facilities, is well-documented. An August 9 report by El Balad, a widely read Egyptian website, gives the details:

El Balad adds that the supporters of Tawfik Okasha, another vocal critic of President Morsi—the one who widely disseminated the graphic video of a Muslim apostate being slaughtered to cries of "Allahu Akbar"—gathered around the presidential palace, only to be surrounded by Brotherhood supporters, who "attacked them with sticks, knives, and Molotov cocktails, crucifying some of them on trees, leading to the deaths of two and the wounding of dozens."

Far from condemning these terrorists, Al Azhar, Egypt's most authoritative Islamic institution, has just issued a fatwa calling for more violence and oppression, saying that "fighting participants in anti-Muslim Brotherhood demonstrations planned for 24 August is a religious obligation."

Most of the aforementioned Arabic sites point out that these attacks are part of the Muslim Brotherhood's campaign to intimidate and thus censor Egypt's secular media from exposing the group's Islamist agenda, which Youm 7, On TV, and Okasha do daily. [Note: the latter's channel was recently shut down, despite Morsi's previous reassurances that "no station or media will be shut down in my era."]

These threats are not new; back in April, an organization called the "Jihad Group to Cleanse the Country" threatened these media with "painful and severe punishments." Apparently now that Morsi has become master of Egypt, threats are becoming reality, just as promises are being broken.

And the threats are taking their toll. Sky News, which was first to report about the crucifixions, has taken down its original article (though the URL still appears in the address box with the Arabic words "protesters-crucified-in front of-egypt's-presidential-palace").

While one may argue that Sky News removed the article because it was found false, one can equally argue that it censored itself for fear that it would be next in the terror campaign against the media.

In reality, there is little reason to doubt this crucifixion story. Militant Muslims crucifying their opponents is a regular feature of the Islamic world—recent cases coming from the Ivory Coast, where two Christian brothers were crucified, similarly by supporters of a Muslim president who ousted a Christian; Indonesia, where Islamic separatists crucified a fellow Muslim for being a military informant; and in Iraq, where Muslim militants crucified Christian children.

Moreover, those alleged to have been crucified in Egypt certainly fit the Koran's description of who deserves to be crucified. According to Allah, "The punishment of those who wage war against Allah and His messenger and strive to make mischief in the land is only this: that they should be murdered or crucified or their hands and their feet should be cut off…" (Koran 5:33).

"Making mischief in the land" is precisely what the secular media is being accused of, by constantly exposing the Muslim Brotherhood and its Islamist agenda. Even the Jihad Group to Cleanse the Country, which threatens to "liquidate" many secular media, accuses them of "creating chaos to implement the American and Zionist agenda."

Finally, it is telling that only a few months ago, and for the first time in Egypt's modern history, an Egyptian MP proposed to institutionalize Sharia's most draconian punishments—including crucifixion.

In short, under the Muslim Brotherhood in Egypt, the bottle has been uncorked and the Islamic Genie set loose. Expect much worse to come.

My first reaction is:

it would be easier to trust the Muslim nations (that this did not happen) if they would acknowledge the Armenian Genocide and make reparations to the Armenian people.

In nations where converting to Christianity is treason to the state punishable by execution, religious warfare is plausible and not absurd.

My next thought is:

In places where Christians, as a religious group, are understood by the government as second class citizens ("protected ones") and their freedom of voice is policed, then the rest of the world not seeing pictures also becomes plausible (remember, the rank and file of Muslim people have never seen pictures of or known that the Armenian genocide even happened.)

The question is, what is possible when we lose our freedom?

Here is cache copy of Sky News report, and it say exactly what Mr. Ibrahim wrote, and I know because I read Arabi: http://webcache.googleusercontent.com/search?q=cache:iEK0g6m44d8J:www.skynewsarabia.com/web/article/38469+&cd=1&hl=en&ct=clnk≷=us&client=firefox-a

Also, Ibrahim link to other Arabic site including big one El Balad and it also support what he say, and even say 2 people die from the crucifixion.

You have no credible sources supporting your claim of crucifixions in Egypt. A quick search of Sky News shows that it is not publishing this information. You are propagating lies and using scare tactics in an effort to rally the uninformed, right-wing masses. It's sickening.

Are there no cell phones in Cairo?

The fact that there appear to be no photographs or footage of this event makes me extremely suspicious of the validity of the reports.

The people of Egypt had an election and put the MB in power. The consequences of this election are on the heads of Egyptians. If Islam is as peaceful as said by many, then why is this happening; Islam is the doctrine of hate/death/and lies.