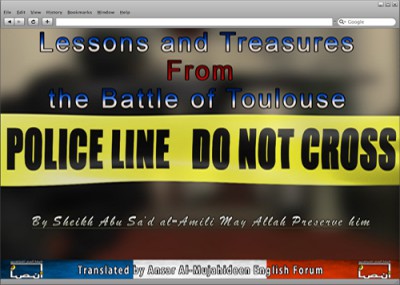 Jihadis are finding inspiration in the murder of Jewish children and French soldiers in Toulouse, calling for the attack to form a new "school" of terrorism in the West.

In "Lessons and Treasures from the Battle of Toulouse," al-Qaida forum moderator Abu Sa'd al-Amili transforms Mohammad Merah's murder of a rabbi, three Jewish school children, and three French soldiers into a glorious raid on Western civilization. Merah's executions, termed "a little like 9/11" by French President Nicolas Sarkozy, are called a "practical lesson in bravery" and the murderer is part of the "fighting men of a special class."

A translated version of the essay was quickly produced, ostensibly to expand the reach of the Arabic essay, which was first released in late March and documented at the time by the Middle East Media Research Institute (MEMRI).

"The hero of the battle of Toulouse will be an example and a role model for whomever is behind him among the Muslim youth in the West, especially those who have not joined up with Mujahid groups," al-Amili writes, emphasizing that the attack is a realization of al-Qaida's call for lone-wolf jihadis. "His message to all those people is that the route to jihad is open and available," promising small-time plotters that their actions will make them heroes for Islam.

To al-Amili, the attack's main success is the rejection of the West's anti-extremism campaigns by a Western Muslim. "The hardest strike against the Crusader West" is that Western Muslim youth are still joining al-Qaida, he writes.

The essay targets the large class of unemployed and frustrated Muslim youth in Europe, touching on themes common in their lives. Al-Amili notes their frustration with life in the West, and at the same time explains how this anger has turned them into the best soldiers in al-Qaida's ranks.

These youth today "have no social value, no jobs to mention, and no weight or consideration," he writes. As long as they are Muslims who believe in Islam's "divine law," "they would be marginalized and allegations would be made against them of being terrorists and radicals, [allegations] which are made to keep them always in defense position rather than attack," he ironically notes.

Western civilization has given them a single option to become "the new servants of their materialistic, unfair civilization" and "lost generations without identity or values or faith, no color, no taste and no smell" to life.

In contrast, the Taliban and al-Qaida give them hope that Islamic law and honor could be restored. And the "wide margins of liberty" in the West, which he demonizes throughout the essay, prevents them from becoming downtrodden like the Arabs living under tyrannical rule in their home countries.

"They were independent of others and self-confident and had other attributes which qualified them to be the best soldiers in the hands of the Mujahideen," he writes. "More than that, they could actually become a special and distinguished type of hidden soldiers who are not known or cared about by many people and who are not easy for the enemy to spot, through whatever methods and ways are available to the enemy."

These "soldiers of a new type" have found their inspiration in other al-Qaida attacks on the West, Al-Amili explains. He singles out the "London and Madrid operations," as well as the Mumbai massacre, as the strongest examples. In London and Madrid, local terrorists used explosives to kill dozens using buses and subways. In Mumbai, gunman targeted popular Western hangouts as well as a Jewish center.

Merah's attack is viewed as particularly unique and noteworthy, al-Amili explains. Unlike other successful operations carried out by immigrants, Western-born Muslims are rejecting local governmental attempts to promote non-violent forms of Islam. The operation has also reminded jihadis about the importance of attacking France, which has been spared the successful mass attacks experienced in the United States and elsewhere in Europe.

Ultimately, the goal of this raid and others like it, is to produce an al-Qaida "in Western dress with blue eyes" and with a "totally Western appearance."

These "Mujahideen have broken the fear barrier and took the [Muslim] nation to a stage of challenge, by staging quick and unique attacks that target the enemy's economic, political, and military positions in their own homes," he writes. The economic and social drain on the West is just as much a success as the damage of the raids.