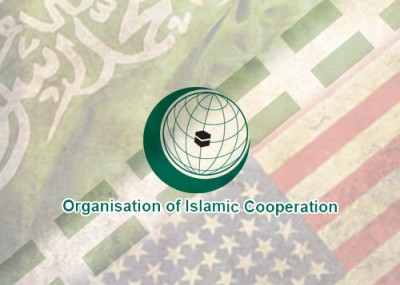 The Obama administration is drawing fire for yielding what critics see as a huge propaganda victory to Islamist regimes seeking to curb American speech deemed "offensive" to Muslims.

In her closing remarks, Secretary of State Hillary Clinton portrayed the conference as a sign that Washington and the OIC are working together to protect religious freedom around the world.

"We have to get past the idea that we can suppress religious minorities, that we can restrict speech, that we are smart enough that we can substitute our judgment for God's and determine who is or is not blaspheming," Clinton said. "I think if we do our work right, in years to come, people will look back and say this was a great step forward on behalf of both (sic) freedom of religion, freedom of expression, and our common humanity."

But according to the Hudson institute's Nina Shea (who attended portions of the conference as an observer), the event was actually a step backward for religious liberty. The meeting seemed to be an exercise in "moral equivalency and pandering to Sunni tyrants in the Middle East," she said.

"The general theme seemed to be that the U.S. has problems just like Saudi Arabia with religious tolerance," she added. "There was a total absence of perspective on all counts."

Pointing to familiar events such the Muhammad cartoon violence, Quran burnings and Muslim objections to the film "Fitna," OIC Secretary-General Ekmeleddin Ihsanoglu argued that his organization regarded bigotry as a primarily Western phenomenon. He wrote that "no one has the right to insult another person for their beliefs or to incite hatred and prejudice," and that "freedom of expression has to be exercised with responsibility."

Zamir Akram, Pakistan's permanent representative of the OIC before the U.N. Human Rights Council was more emphatic. He claimed that Resolution 16/18, which expressed concern about "negative profiling" and religious "stereotyping," was driven by Western discrimination against Muslims. Akram also questioned whether Muslims engaged in discrimination, and said Muslims would not compromise on permitting "anything against the Quran, anything against the Prophet."

Given these comments – and Saudi educational materials that encourage the spread of Islam through jihad and demonize Jews, Christians and polytheists – Shea believes U.S. officials are "naïve" to think there will be reciprocity from the OIC when it comes to combating discrimination.

Despite Saudi Arabia's abysmal record of persecuting non-Muslims, the Kingdom received a note of dubious praise from the United Nations General Assembly, which on Monday passed a resolution condemning religious intolerance. According to Shea, the UNGA resolution – passed by consensus with U.S. support – singled out for praise a single program: A Saudi-built "religious dialogue" center in Vienna, Austria.

Given Saudi Arabia's relentless persecution of non-Muslims, the praise is "Orwellian," Shea told the IPT. "They don't dare establish such a program on their own territory."

OIC member states spearheading the anti-blasphemy campaign include Egypt, Pakistan and Saudi Arabia – all of which jail or execute "blasphemers." In nations like Egypt and Iraq, Christians are attacked and their churches torched while Muslim-dominated governments are unwilling or unable to protect them.

"In these countries, you have 'cleansing' tolerated by the authorities," Shea noted. "Religious cleansing [of Christians] is underway right now in Egypt and Iraq. It's been completed in Saudi Arabia. Jews have been cleansed from the Sunni Muslim world."

Clinton's Dec. 14 remarks included a rebuke to Islamists who seek to silence people of other faiths. "But is our religion so weak that statements of disapproval will cause us to lose our faiths?" Clinton asked. She added that there is nothing wrong with "hav[ing] good debates with others."

But Shea emphasizes that the behavior of OIC participants like Saudi Arabia gives no indication that they are interested in dialogue with minorities in their countries. She said that at the conference, participants largely ignored the vast differences between the United States and OIC member nations in protecting religious minorities.

One legal official (State Department confidentiality rules barred observers from identifying him or his country) gave a "one-sided depiction of American bigotry against religious minorities, including Muslims" in his opening keynote address, Shea said, telling representatives of some of the world's most repressive regimes that America can learn from them about protecting religious tolerance.

But the official never bothered to explain that, when compared with other countries, America has an extraordinary record of "upholding individual freedoms of speech and religion," Shea told the Investigative Project on Terrorism. "The tolerance of the American people is misrepresented by omission."

Pointing to mounting reports of atrocities and intimidation against Middle East Christians and mass slaughter by the Islamist regime in Khartoum, Shea didn't mince words in characterizing the attitudes of the American conference participants toward their OIC counterparts.

"It's the equivalent of saying to Hitler: 'Well, you have a real problem with the way you treat minorities and we have a problem with limiting the rights of Aryans here.'"

The OIC (previously called the Organization of the Islamic Conference) has pushed for a universal blasphemy law for more than a decade. Since the November 2004 murder of filmmaker Theo Van Gogh in the Netherlands and the 2006 riots protesting cartoon depictions of the prophet Mohammad, the group has pressured Western European nations to implement speech codes punishing criticism of Islam.

In March, the Obama administration thwarted the OIC's attempt to win United Nations Human Rights Council passage of a resolution calling for criminal penalties for the "defamation of religions." The following month, Washington engineered Council passage of Resolution 16/18, a nonbinding measure which did not censor speech.

The victory didn't last long. In July, Secretary of State Clinton revived the issue when she co-chaired an OIC session in Istanbul dealing with "religious intolerance." Clinton called on countries to "counter offensive expression through education, interfaith dialogue and public debate," while emphasizing that speech restrictions were unacceptable. She invited conference attendees to a follow-up meeting to continue the dialogue.

OIC officials seized on Clinton's offer by stepping up their campaign for blasphemy laws and speech codes.

Based on conversations with U.S. officials, Shea believes that many of them fail to grasp what the OIC represents. They lack essential information about apostasy and blasphemy laws and have "very little knowledge of the illiberal nature of the OIC," she said. "There's a sense of political correctness that prohibits probing of that organization and what it stands for."

Although the United States is unlikely to emulate Western European countries in enacting speech codes, "what we see is self-censorship" by agencies like the State and Homeland Security departments which are barred from discussing issues such as Salafism and jihad. Moreover, "in the media, academia and the entertainment world, we see self-censorship on behalf of Islam. Certain issues are off the table."

Shea believes that this "politically correct" approach to Islamism has disturbing implications for U.S. national security. In the case of Maj. Nidal Malik Hasan, who massacred 13 of his fellow servicemen at Fort Hood in 2009, co-workers emphasized that they were deeply troubled by his jihadist ravings regarded him as a radical Muslim "but didn't report it for fear of being labeled "Islamophobes,'" she noted.

Similarly, a Senate committee issued a report documenting a culture of timidity at the Pentagon on the subject of Islam. Shea said the Fort Hood massacre is a "perfect example" of the danger posed by the U.S. government's failure to address the danger Islamism poses to our liberties.

2-2-12 Hillary Clinton is out of touch with what is best for America if she thinks this will ever be considered "good for people of all religions." It would take away our freedom of speech which is a critical part of our Constitution and Bill of Rights. This Resolution 16/18 MUST be stopped. Ona

There is no equality or tolerance

From my own travels and from friends who are Christians in predominately Islamic nations there is no equality or tolerance. Iran says it will destroy Israel and all Jews. Where is the equality and tolerance? The leaders of the Palestinians in Gaza basically say the same thing and they want to have their own state and destroy the state of Israel. If the OIC or anyone else wants an equal and free level of tolerance and speech; then let them mirror that of the US; not the other way around. I am to the point of declaring if you (Islamic nations) don't treat your people of different faith with respect for their life and freedom of religion and freedom from harm by Sharia laws; then we (the United States) will not support you. We have no obligation to let these nations dictate to us how we should treat others in this nation which is founded upon Judeo-Christian values; which are the basis for more freedom and tolerance than any other in the history of the world.

I think the critical difference between Islam and the West is in the concept of tolerance and the mindset attaced to it. Islamists, obviously, think tolerance has something to do with non-Muslims not saying or doing things about Islam that Muslims don't like. This goes as far as non-Muslims not defiling Muslim lands by setting foot in them. They see the onus to exercise tolerance as being on the Other, and the Other only. The supremacist mindset of Islamist prevents them from understanding that tolerance, to Westerners, requires reciprocity. It means that, sometimes, you have to put up with hearing others say things you don't like. This is something that Secretary Clinton and other Westerners involved in these discussions should recognize and understand. That they don't seem to recognize or understand this critical difference is criminal.

Brilliant article on our succuming to Islamic propoganda

Your article is truly a classic because it focuses on the problem we have with the Obama administration's succuming to Islamic propoganda.